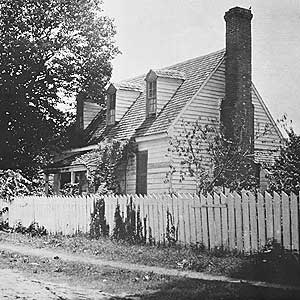 Tantalizing new research points to an impossible conclusion: the Reconstruction may have overlooked an original 18th-century building. More remarkable still is the possibility that it may have housed Virginia’s first school for the education of black children: the Bray School.

Archaeologist Mark Kostro details the story the soil tells as his team hunts for the conclusion suggested by Professor Terry Meyers’ research: the Bray School is found.

Harmony Hunter: Hey, welcome to the podcast. I’m Harmony Hunter. Last month we talked with Terry Meyers, an English professor at the College of William & Mary who believes he’s uncovered an overlooked 18th century structure that had been one location of the colony's first school for the education of black children.

Meyers’ research was so compelling that it led to an archeological investigation, and that’s where my guest today comes in. Staff archeologist Mark Kostro joins us this week to pick up the story where Professor Meyers left off. Mark, thank you for being here today.

Mark Kostro: Thank you for having me.

Harmony: Well we’re talking about the Bray School, and as I mentioned in the introduction, this is a school that was established for the education of black children, both free and enslaved in the colonies; a really important counterpoint to the troubling story of slavery in the 18th century Williamsburg. Tell us about the Bray School and how Professor Meyers' research has led you to actually doing some excavation.

Mark: Sure. So Terry [Meyers] did some great work in tracing down the documentary record of this school that survived in Williamsburg for 14 or 15 years on three different locations. The site that we’ve been investigating was the first location of that school beginning sometime around 1760 and it moved away in 1765 to a second location.

Terry has this thesis that a building that still survives today down the street on Prince George Street used to occupy the location that we’ve been investigating which is now the site of Brown Dormitory; it's one of William & Mary’s dorms. And so he believes that, originally, that the building that was moved -- and we know that it was moved for sure -- that as part of its 18th century life was used as the Bray School.

And then, if there was any other material evidence to help us understand what black education consisted of in the 18th century. We know a little bit about what schools for white children were like, but we have very little understanding of what a black school would have consisted of. And so we wanted to find out if there is anything archeological that would speak to that question.

So are there artifacts, in particular, that are going tell us about what was being taught at the school, and what life was like maybe for the students who were attending the school, and maybe if any of them lived at the school. That was a big question for us to try to resolve as well. As archeologists, we don’t just look for a single time period, we look for what’s happening on a site before and after a particular occupation so that was also a definite part of our research goal.

Harmony: You mentioned the artifacts that you would expect to find with a school for white children. Give me some examples of some of the things you might expect to find in that sort of school.

Mark: There’s been very little archeological research done on that, not just in Williamsburg, but, you know, in the literature there’s very little written about it. But we surmise that things like slate pencils, writing slates, the actual tablet that people would have written on could have been some of the things that were found that we might find in a school context.

And then schools were not just used for teaching, reading and writing and arithmetic but other skills as well. So in our context, one of the things that Professor Meyer’s believes was being taught at the Bray School was sewing. So we’re particularly keen on finding sewing related artifacts to prove or disprove that thesis of whether sewing was part of the skill set that was being taught to students at the Bray School.

Harmony: And so you’re trying to reach in really delicately and extract evidence fromâ€¦how long do you think the school would have been on that site?

Mark: No more than 5 years.

Harmony: Just a little five-year slice of that site's history.

Harmony: So it seems miraculous in that light that you would be able to find any kind of evidence for a specific occupation or a specific type of use?

Mark: It’s very difficult. You know It’s certainly a challenge but it’s something that the artifacts certainly help us out because, you know, one thing that’s really great about working on colonial-era sites is that the artifacts change, fashions change, fads come in and out, so we can pretty tightly date ceramics, for example, to a particular time period and they’re in use for a relatively short amount of time before something new comes along and replaces them.

So we use the ceramics, not just to tell us about what people were using, but they’re also an indicator of time for us. So when we find a certain concentration of ceramics that date to a particular time period for the Bray School we’re going to be looking for those that are going to be in use in the 1750s and '60s perhaps. Then we know that we’re kind of honing in on the area that we want to be looking at and focusing on.

Mark: That’s right. So the site is being investigated as part of a collaborative venture between Colonial Williamsburg and the College of William & Mary. And so this is a field school that we’ve run every year for 29 years now, but for the last few years we’ve been working on college-owned property, investigating some of the college’s little-known history.

And so in this case we’re looking at the Bray School, that we’re talking about, and so we’ve run a field school that lasts five weeks in the summer. And actually we run two of them back-to-back so in total we’re out there for 10 weeks and we have anywhere between 10 and 15 students out there at any one time. And we’re going through all those different soil layers, you know, examining each occupation, going back in time and then even beyond the Bray School, and sorting through the artifacts.

We’ve collected literally tens of thousands of artifacts from this site and now our challenge is to sort out which ones relate to the Bray School, and in particular what we’ve been focusing on are these things that may suggest an educational use. One thing that we found are pencils, slate pencils, lots of them. In fact, slate pencils in a quantity greater than any other site that I’m aware of in Williamsburg and thus far even inâ€¦for the surrounding region we have not seen sites with this density of slate pencils on them.

So that led us down a path of trying to figure out what slate pencils could be used for. Obviously they’re going to be used for writing and we know that they exist on older sites. They found, not the pencil, but a slate at Jamestown, for example, in a 1607 context or 1609, something along those lines, but a very early context nevertheless so it’s an ancient writing technology.

What was unknown to us is whether they were absolutely used for education or were they just used for recording in stores or that sort of thing or personal, for other personal use. The fact that we found so many in this one location in a site that we’re pretty confident had a school on it even if we’re not sure about which building it was. It would have been occupying the same ground. We feel pretty good that these slate pencils relate to the use of this property as a school in the 1760s.

Harmony: Tell us what a slate pencil looks like.

Mark: It’s really tiny. Well, what we find are just the broken bits of it. Each of the segments that we find is about an inch long and it’s very thin; about half the diameter or maybe even a third of the diameter of a pencil that you and I would use. It’s very thin. It’s black. Every once in a while we’ll find the tip, but for the most part we’re finding what we would call a mid-shaft fragment. It’s just a cylinder of this black slate material. It’s really not particularly exciting to see it, but what was exciting about, on this site, was the density of those fragments in close proximity to one another and clustered within a space that we’re pretty sure has an educational use in the 1760s.

Harmony: To me what sounds really exciting about it is that it helps to prove the theory that Professor Meyers had on paper and from the documentary record you’re able to look in the ground and find some things that help sort of shore up that theory and sort of make you think, “Hey, maybe we’re on to something here, we could be finding a building or a site that tells a really important story about Williamsburg’s history, about America’s history.”

Mark: That’s right. When archeology is at its best is when it’s done in conjunction in tandem with archival research and so Professor Meyers was doing that research already. He got, you know, very far down the road with this question of where the Bray School was, and so now we’re able to jump in there and do more than just prove his theory.

We’re able to enhance it and come up with our own questions to the question of what the Bray School was like. So for example, again, looking at what the curriculum of the Bray School was like and, you know, that’s something that’s not written down for the most part, but it does survive materially in the ground and it is something that is uniquely answered through archeology.

Harmony: It’s a really fascinating story on so many fronts. We look forward to seeing how this story develops and what you’re able to prove about the story of the Bray School. Mark, thank you for being here today.

Mark: Thanks for having me. It’s been a lot of fun.