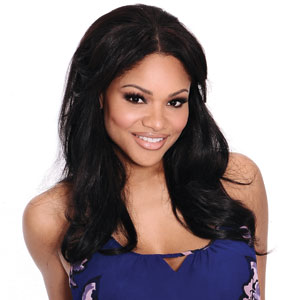 Film and television actress Erica Hubbard appears at Colonial Williamsburg in a live performance March 9 as part of Steadfast Spirits Weekend. Hear how she prepares to take on a period role, and the inspiration she finds in Lydia Broadnax’s story.

Harmony Hunter: Hi, welcome to the podcast. I’m Harmony Hunter. Actress Erica Hubbard is a star of television and movies, and this March she’s bringing her talents to Colonial Williamsburg in a live performance as part of Steadfast Spirits Weekend.

Erica, thank you for being here today.

Erica Hubbard: Oh, thank you for having me. Thank you so much Harmony.

Harmony: You have had a varied career playing modern roles in TV and film, and on March 9th you will be joining us to give a live performance in a historic role, interpreting Lydia Broadnax. Tell us a little bit about who Lydia Broadnax was.

Erica: Well she was born in the 1700s. Lydia works as a housekeeper, or some people may say a servant, because back in the times they did call them that. She works for Mr. Wythe and she’s this very strong-willed person. She hears everything that goes on in the household and her opinion counts just as much as Mr. Wythe’s, who signs the Declaration of Independence.

The reason why her opinion counts just as much is because she learns so much by hearing all the things that go on in the community as far signing the Declaration of Independence and Thomas Jefferson and all the other political figures. So by her hearing all this, she just becomes so educated, and that’s why she ends up having these conversations with the man she works for, Mr. Wythe, George Wythe.

I don’t want to give too much of the story away, but he respects her views. But Lydia just has this voice and she’s just a strong willed determined individual that wants her freedom.

Harmony: What drew you to accept this role? Were you a fan of history to start with?

Erica: I really enjoy this piece and I just think that history, people need to hear about it. I wanted to give this voice to this character because, so importantly, the strength of a person just speaks so much boundaries for them. You see a lot of people that still have insecurities and they don’t know who they are, but yet you have this lady, Lydia, in the 1700s who knows who she is â€“ so now fast forward.

If people can see Lydia and see how much strength she has, maybe people today, it would build their self esteem up, and that would give them hope to have a voice and speak out and stand behind what’s right or what’s wrong. We have the whole political system that’s going on today and votes and laws are being changed and laws are being passed and sometimes people have those conversations in their heads but then they don’t speak about it or they don’t petition about it or march about it.

Lydia is that example that, “This is what I stand for, and this is what needs to be changed, or what needs to happen.” When she speaks in a humble way in the house but now maybe she can give hope to the people in the 21st century to have a voice.

Harmony: How did you go about preparing for this role?

Erica: Oh, I love time period pieces, Harmony. I love them. what I have to say that it was easy for me to get into this time period and even like I had a couple of dialects for the director because I’d done this period piece before . I was actually nominated for NAACP theater award for doing a period piece that was back in this time frame so it was just kind of natural. It was just something that’s like, “Oh, you want me to do ‘Lydia for Liberty’ and what time period it is and oh, ok, perfect.” Soâ€¦

Harmony: You will be working in concert with another actress, Katrinah Lewis, who will portray Lydia Broadnax towards the end of her life, as you portray her in her youth. When you look at Lydia’s life at these two ends of the spectrum, what really stands out about her?

Erica: What stands out to me about the character Lydia is just her integrity. For that time period, women were supposed to be subservient. Although she is, she stands her place but then she kind of knows when to speak and when not to speak and what tone to use. I just like her emotional depth. The writing is so good in this story. She has so much emotional range. It’s like this character’s so versatile that you just sink your teeth into the dialog and it just carries you and moves you.

So many times we look at movies and television shows and even theater performances and you don’t see emotional depth to these characters. It’s just like, “Ok, they’re kind of monotone,” ok, but this character right here takes you on an emotional roller coaster because she has all these different personas. So that’s what I respect about Lydia. It’s just her emotional depth.

Harmony: You talked a little bit about the disadvantages that Lydia was at as a woman and as a slave. As a modern woman, were there aspects of her life that it was hard for you to identify with when you think about all the rights and privileges that we enjoy today?

Erica: Well, we do have a lot of rights that we do enjoy today, but then we also have a lot of rights that we don’t enjoy today because they’re not given to us. I mean there’s so much out there in the world that we encounter as far as discrimination. So the experiences from the 1700s versus now, it’s still out there but it’s not as blatant, it’s not as blatant. But I mean we just have a lot of work to do as people. I think bringing this play to light that people can see you accomplish more as a unit, as a team.

So if we respect each other we just no matter what level you’re at in life, we can just accomplish a little bit more because you might learn something from somebody, whether they work for you or you work for them. So, I just think nowadays it’s the matter of us respecting each other.

Erica: Oh yeah, I think most definitely before the actual Civil Rights movements it was started with Lydia, most definitely. She had that voice and started a movement. Most definitely she was a voice to the voiceless and you just respect her when you see her and it makes you feel good. It’s just like, “Yes. That’s someone I can look up to.”

Harmony: What do you want the audience to take away from this performance?

Erica: Most definitely I want the audience to come and support and come see this character March 9th and take away the fact that you see this beautiful woman who back in her times was shunned upon because of her position. But I want people to take away hope and determination, and courage from when they see Lydia encouraging and hoping for the best and wanting more for herself and her community. I just would like a lot of people to help each other out.

I have a non-profit, and my non-profit’s the Erica Hubbard Foundation, and what we do is we go in the communities and we help people who deal with poverty. So just give more of yourself, more of your time with people that don’t have as much as you. Then listen to others, care for people and just take away that human spirit is delicate, but if you respect it, that just love grows out of that respect. Like the saying goes, “It takes a village to raise a child.” So just help people, help each other, be kind. Most definitely if you see something that needs to be changed, lend your voice and your time to change it to make it better.

Harmony: Do you see yourself looking for and accepting more historic roles like this in the future?

Erica: Oh yeah, I do see myself portraying more period pieces, whether it be in television, film or stage. I love portraying that era. You see a lot of people with dignity and pride and its beautiful, it’s a beautiful thing.

Harmony: What can we still learn from Lydia?

Erica: Sometimes pieces like this are so vital that we portray them so people now can pick up the strength of people that we saw back in the days . So it’s just like I’m going to show you this woman’s inner spirit and even though that was in the 1700s, in the 21st century, you have a voice. You can speak up and speak out, so I just think when you see a movement in someone else it’s kind of contagious and you start like that positive movement.

Harmony: [Second take of this question] Well Erica, your passion for this role really comes through, and I know that it will only be stronger in your live performance coming up March 9th as part of Steadfast Spirits weekend. We hope that all of our listeners get a chance to come out and see this performance and learn more about the story of this remarkable woman, Lydia Broadnax.

Erica: Thank you so much Harmony. I really appreciate it.