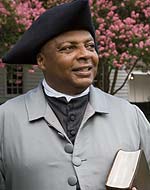 A powerful agent of change during a time of the greatest repression, minister Gowan Pamphlet shared a message of hope and dignity. The first ordained slave preacher in America paved the way for the civil liberties and meaningful equality the future would bring. Hear his story.

Harmony Hunter: Hi, welcome to the podcast. I'm Harmony Hunter. We're celebrating Black History all month long at Colonial Williamsburg, where we are able to take a close look at the very beginnings of the influence of Africans on American culture.

Our guest today is James Ingram, and as part of the Nation Builders program, he interprets the way in which blacks were able to shape the founding character of the nation, even while they were disenfranchised and without voice. James, thanks for being here today.

James Ingram: Great to be here.

Harmony Hunter: Well, let's talk first about the idea of the Nation Builders program. You are bringing voice to a lot of these people, movers in history, whose names we might not be familiar with. Not the George Washingtons, the Thomas Jeffersons, but people whose impact was nonetheless momentous, world-changing.

James Ingram: Absolutely. The person I portray, Gowan Pamphlet, born here approximately, about 1748, in King's Arms Tavern, right on the Duke of Gloucester Street, in close proximity to the Capitol Building across from the Raleigh Tavern, two of the most famous taverns in all of Virginia.

And so I've always been, the person I portray, has always been part of the inner workings of Williamsburg, connected with the politicians and the sea captains and the teachers like Mr. Fithian.

Harmony Hunter: You said he is born in a tavern and a tavern is more than a restaurant in the 18th century, it's a cultural center. It's a place where people meet, they discuss politics, it's really a hub of social activity and so Gowan Pamphlet is born into this, he grows up in it and it becomes his education.

James Ingram: Absolutely. The tavern is like the Gazette in the 18th century but I always say we're actually better than the Gazette because we get the news from the horse's mouth. So, who was frequenting the King's Arms Tavern? General George Washington and Thomas Jefferson and James Madison and the Lees, Richard Henry Lee, Harry Lightfoot Lee, Patrick Henry. The notables of the period would frequent the tavern.

So what kind of conversations are they having? Well, conversations on politics. And so Gowan is right in that room and listening to all of this conversation about politics. He knows about the laws before they write them down. So, the tavern is central to any community.

Anytime you want to know what's going on in town: if you want to start a business, if you want to be connected to someone very important within the town, you would come to a tavern first and get that information then go out and seek the other tools you might need to be successful in the city.

Harmony Hunter: Let's talk about who he becomes. Why are we talking about Gowan Pamphlet today? What did he do?

James Ingram: Gowan Pamphlet is a phenomenon. I'm not just saying that because I portray him. Gowan Pamphlet literally becomes one of the only ordained slave preachers in America, literally. It's because of his owner Jane Vobe.

Harmony Hunter: Let's talk about that. The only ordained slave preacher in America.

Harmony Hunter: What does that mean? It means in a time of slavery he leads his own congregation, his own flock. He must command a tremendous amount of influence and power with that position of leadership.

James Ingram: Oh, absolutely. Now I say he's unique, and very unique, because most slave preachers are literally put to death. If you are caught in a secret meeting – mainly at night time they are holding meetings out in the brush, far back in a wooded area, some secret area you would find to worship – they will send patrols looking for you.

And of course, if they find that meeting, which most of the time they are very successful, someone is always going to tell where you are. Those that attend the meeting normally are punished but the leader of the meeting, especially if he is a slave, he's going to be charged with a legal charge called insurrection. That's literally meaning that you are planting in the heads of those that you're speaking to ideas like riot, overthrow, killing your master.

You're taken to the courthouse right on the Duke of Gloucester Street and you're going to be charged with insurrection and the sentence is death, to the gallows. So before Gowan, many of those that called themselves slave preachers just didn't live. He was a phenomena because he did live and I think a lot of it is because of his owner, Jane Vobe, who owned the King's Arms Tavern. He is her property, so she can actually have, she could have stopped him at any time, could have sold him down to the Caribbean to keep him from this preaching, this exalting, but she didn't. The question is why?

Harmony Hunter: She had a much more permissive or inclusive relationship with him than probably would have been the norm during that time.

I think Gowan also benefited from the standpoint that Jane Vobe was a woman and how women are treated in the 18th century. Because of her rise in prominence, I think he just kind of rode her skirt tail right up to be the pastor and preacher that he was because her connection became his connection. He learned the art of negotiation quite well and they understood one another.

Jane Vobe also took advantage of the edicts that would come from the Bishop of London. An edict in 1756 to all the Anglican churches in America: Allow your Negroes to proselytize because if they become Christians they will become better slaves. So, I think Jane Vobe if she gets a complaint from some of the townspeople that are coming to the tavern, "Mrs. Vobe, your Negro is out there preaching and you know we don't encourage our Negroes to preach."

"Well, he's not breaking the law, even the Bishop said, 'allow our Negroes to proselytize.' Well, he's not preaching, he's proselytizing and I'm sure you know he is a Baptist, they can't keep still." So, I'm sure she's kind of fending off whatever complaints she might be getting about Gowan's preaching by using whatever allowances by the Bishop, by the church. Toleration is big in 18th century, so maybe she's using the fact of toleration to allow even a slave Baptist preacher. I always say, “I'm the most dangerous man in Virginia because I'm an ordained slave, Baptist preacher.”

Harmony Hunter: What kind of courage must Gowan Pamphlet have had? If you really think about what he was up against. He'd seen his contemporaries, as you said, punished by death for preaching. It was against the wishes of society. There must have been a lot of pressure and a lot of opposition to him being a figure like that. What can we think about his character when we think about how he persisted even in the face of all that?

James Ingram: Well, he's a visionary, Gowan. I believe he saw things sort of the future. He realized one thing about the church, I would say the organism, the body of believers. He realized that church could be and probably will be able to be the central liberation point for them.

The church is a place where you can come and hear from the great word of God, which I would call like medicine in the 18th century. That medicine applied, I always tell people you can to Dr. Galt, Dr. Pasteur and the only thing they are going to do is bleed you to death or purge you to death. What, do you want to die? But at least when you come to Gowan you'll get some healing.

And those words in the Bible became their means of administering a salve to their bondage and what they see. And Gowan is able to help them see that they are more than a piece of property and they are human beings. So he really realized in the church, the church is an organism they can come to because they are allowed to and in that church...the church in the 18th century is a mini government.

Gowan is sort of like the mayor. Then he has deacons, and then he has his teachers and slaves are allowed to, even read in the 18th century, especially in Virginia and so you could actually come to the church and learn how to read, write, and cipher numbers like can go to the Bray school.

Harmony Hunter: Do you feel like Gowan Pamphlet in some ways paves the way for the work that later ministers were able to do and other changes that are able to be brought about through the church?

James Ingram: Gowan, I believe, is a precursor to Martin Luther King and I think they both had a lot of similarities in their vision for their community, how they're bringing their community up from the doldrums of oppression, bigotry, and racism and bring it to a point of respect.

Harmony Hunter: James thank you so much for coming by today and sharing the story of Gowan Pamphlet.

James Ingram: Thank you for having me here.