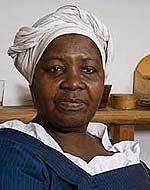 Edith Cumbo was a rare individual in colonial Virginia: a free African woman. Learn about her life and her stature in this interview with Emily James.

Harmony Hunter: Hi, welcome to the podcast. I'm Harmony Hunter. Today on the podcast we're talking about someone we've never talked about before, but not without good reason. Individuals like the one we're getting acquainted with today are people who had little voice in their own lifetime and even less voice in history.

The person is Edith Cumbo, who was a free African-Virginian woman in the 18th century. She's portrayed here at Colonial Williamsburg by Emily James, who's come by to tell us about this remarkable woman. Emily, thank you for being here today.

Harmony: Well, we're meeting an entirely new individual today, Edith Cumbo. Tell us about where her story starts and who she is.

Emily: Well, Edith Cumbo was free African-Virginian female. She was born in Halifax County, Virginia from a white mother. Her father was also a free man. As a matter of fact, her father fought during the Seven Years' War, the French and Indian War as an infantryman. We know this information because we secured this information from the York County and Charles City military record and from the church records about 1719 and 1782 enumeration of the census. That's how we know who she was.

She took a man by the name of Adam White to court. She won, and the court awarded her twelve pence, which would be a shilling. She herself was also taken to court for non-attendance at church and also she was taken to court, examined for having a child out of wedlock. So all this information we have on her whereby we were able to put the character, Edith, together.

Emily: Exactly, however the law was repealed whereby children being born out of wedlock later on the boys are serving 21 years and females are serving 18 years when they reach their majority. Much like other free blacks, such as Matthew Ashby, he had to also serve 30 years before. After that 30 years, then you're considered free, but until then it's like you are bonded, because as an indenture it's not a part of your indenture contract. We believe Edith's mother to be an indenture, an Irish woman. We believe her to be an indenture. So she would have to serve 30 years and then she would become free.

Harmony: So Edith Cumbo is already a remarkable person in a couple of ways. She's born as a free black and she exists in the historic record.

Emily: Exactly, exactly. We've been seeing this woman earlier on and they believe her to be a white woman because not only is she owning land, but she's owning horses, she has a homestead and she had a servant, so they believe at first that she was a white woman, but then after several investigations and more research, then they realized her to be a free Negro in Virginia, one of those free Negro females in Virginia.

So I portray her also as a free black laundress and seamstress along with a businesswoman because people that testify on her behalf in court she would also have to pay tobacco, 30 pounds worth of tobacco. So on her land I have her whereby she's not only growing corn, wheat and barley, but also a small amount of tobacco for her personal use. And I think Edith would be very unique within our community and would be collaborating with other women within her community.

So I just believe that all these examples would be life experiences for her and maybe these are some of the reasons why she chose not to marry.

Harmony: Even though she had the advantages of being a free African and running a business, what are some of the challenges that she might have had in society that's still deeply racist?

Emily: Well, of course, the laws are what keep people in their proper places so she would have to be, she was like maybe neither fish nor fowl. She would have to try to walk with within the confines of that law. She would remain in her community where everybody knew her and knew her circumstances because if she ventured too far from her community, she could be turned into a slave.

If she did something that most folks would perceive to be against the law, Edith could lose her freedom. So therefore she would have to walk within the confines of the law and also be an advisor and a teacher to other folks within the community.

Harmony: There's so much to draw out of her story. Often it's such a challenge to tell the story of Africans in Virginia because they just don't exist in the record or what existence they have is pretty sparse. What do you feel like what is important to bring out of her story when you portray it for visitors?

Emily: Well, when I portray Edith for visitors, when I become Edith, I share Edith's endurance within a society that is entrenched in slavery and injustices. I show Edith as a strong woman that would uphold certain principles within her community. Not only would she be looked upon as a matriarch, but Edith had four brothers, no sisters are documented, and all these four brothers along with her only son are serving in the war on the patriot's side.

Richard and Solomon and John and Steven and her only son also had served. So just think about a mother having her only son, and she's already free and the son is already free, but still encouraging and allowing them much like any mother today not knowing whether or not your son would return.

Harmony: Emily, thank you so much for being our guest today.