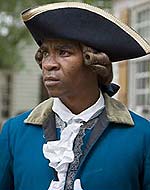 African American history is both discovered in and continued by an ancient oral tradition. Richard Josey describes the process of restoring a community’s voice.

Harmony Hunter: Hey, welcome to the podcast. I'm Harmony Hunter. When you walk around in Colonial Williamsburg's Historic Area, you don't just see history, you meet it. Historic interpreters populate the streets and buildings to give you a past you can talk to.

Recreating characters who lived 200 years ago is challenging in itself, but an extra layer of difficulty presents itself when you're trying to bring people to life who had very little voice to begin with.

Our guest today, Richard Josey, is a Program Development Manager at Colonial Williamsburg, and he works every day to uncover the stories of 18th-century Williamsburg's African residents. Richard, thank you for being with us today.

Harmony Hunter: Now when we bring African American individuals, when we interpret that in Colonial Williamsburg, the people you meet, are they actual people who we know lived during the 18th century? Are they composites of people that we might know a little bit about? How do you decide who gets portrayed?

Richard Josey: There's a core set of characters that we focus on, like Eve from the Randolph house, or Gowan Pamphlet, who was a Baptist preacher at the time, or Edith Cumbo, who was a free black woman that was around at the time, or Juba at the Raleigh Tavern. There's a core of characters that are our mainstays, if you will, throughout the course of the programming, and that's for Revolutionary City particularly.

But then we add in other characters like William Wells, who's coming from outside of town, who can be one that's bringing in news. And then it gets interesting when we start looking at those characters because then there's different pieces of information for different characters. For example, he was listed in The Book of Negroes, which is a listing of all the folks who ran during the Revolution and joined with the British and left with the British in 1783 and we know that William Wells was one of those.

He was from Mulberry Island, which is present day Fort Eustis. So that's close enough to town, where it makes sense for him to be able to come in town, bring this news, we know he runs off with the British. The British are offering a proclamation in 1775. So then all of those pieces come together in that sort of way that makes it make sense for us to choose William Wells as a character that we build up and that we use.

Some of them we know a lot about, like Gowan. We know a considerable amount of information about Gowan. Then there's others that we don't know much about. So we just look at like folks, and kind of build that character off of other sources.

Harmony Hunter: Talk to me a bit about some of those sources that you use to fill in a character, because I imagine the historic record is probably scant enough when you're looking at even just white people who lived in the 18th century. When it comes to African Americans, there must be even more special challenges to finding anything in the record.

Richard Josey: There are, and what I will say is that there is a lot of information out there and I've got to qualify that because it's very different than picking up an autobiography on Jefferson or these well-known folks. For the lesser-known folks, and particularly African Americans, we have to use the Virginia Gazettes, runaway ads, inventories, diaries, journals.

One of the newer things that I've at least started to really take some time in doing is looking at some of the things that were written in the 1800s. Because then, once you look at the 1800s, and you know, WPA reports around 1865, people are talking about the things that their great grandfather told them.

Harmony Hunter: So you're talking about that there is a WPA project to collect oral history that happened the century after the one that we're interested in and it's in those recollections of descendants of some enslaved folks. How fascinating, how did you find those?

Richard Josey: Well, I used to work with a couple of gentlemen who really started a lot of the African American programming here. Dylan Pritchett, certainly Rex Ellis and Rex used to always talk about WPA, and Dylan. I spent two days with Dylan just talking about, off and on, talking about the WPA, and all kinds of stories that were in there.

He showed me one that somebody was saying that my father's grandfather told me about a time when this happened and when that happened and so on and when you really start to add those years or subtract those years from that year, that time when it was taking place, then you're around 1780s timeframe.

So what you find is this later period, interviews with black descendants recollecting what their father's father's father told them, and that is very African. It's the oral tradition. Not doing a whole lot of writing, but they're passing things down from generation to generation. So then, once I understood that, everything kind of opened up a bit, especially when we're really looking for that unique perspective of the enslaved and the free black community at the time. You know like you said, everything isn't all written down and easy to do.

Harmony Hunter: That's a wonderful echo of the oral tradition that you were talking about. I love the circularity that you're able to learn more from the continuance of that tradition.

Harmony Hunter: When you find new sources like that does it force you to have to rethink the way that you're interpreting something here, or person here?

Richard Josey: Absolutely, I've spent a considerable amount of time portraying Jupiter Jefferson and as I continue to look at memoirs like Isaac who was a blacksmith up there, and hearing him speak, and what his thoughts were and I have to really start second guessing what I imposed on what Jupiter would've thought.

When I look at some of the Washington characters, for example, and I'm starting to see what their descendants have said about Washington, I have to start looking at Washington in a different way which sometimes is different than how the mainstream sees Washington. So it does get challenging, especially when history classes have always taught you, "This is the story," and then you start to see other perspectives that start to make you realize that the story is much bigger than just one perspective.

Harmony Hunter: So in that case, which one do you choose?

Richard Josey: I choose the African American perspective, simply to give that other perspective. That's probably one of the most important things that we can do now is assure that we don't tell one story. Well, we tell one story, but the story has different perspectives. And everybody doesn't feel the same way about everybody, like they do now, so.

Harmony Hunter: Is there an individual that you've brought back to life on the streets of Williamsburg that you're particularly proud of, or that is a favorite of yours?

Richard Josey: I think my favorite was Peter. Peter was a serving man at the Raleigh Tavern. I used him to really kind of convey that militant side of enslaved folks, the rebel. He's really going to challenge the system, and he's going to decide to run away. Risk getting caught, risk his life, for the promise of being able to wake up in the morning and be able to look at his wife, and know that that's his wife, and not worry about her being sold off, or seeing his children and not worrying about the children being taken, and all those sorts of things.

I'd rather say that than freedom, because freedom means different things to different people. But I think Peter affected people in a certain way. In 1999, Peter was the character who was going from one side of town to the other side of town to run away. And the way we built the program up was that the guests could follow.

It was about something that was genuine and precious to all of us. And to affect children in that sort of way, I think that was the proudest character that I think I was able to resurrect and bring back on the streets because he served a greater purpose than what I could serve.

Harmony Hunter: African American history is a difficult subject and an uncomfortable subject to address. It's not a pretty history, yet, you've devoted your career to it. Why do you continue to work to present this material and to tell these stories?

Richard Josey: African American history, I believe that African American history can be used to help promote social consciousness of how we as Americans operate here today. There's a direct connection between slavery and racism. I have an 11-year-old daughter and she'll live a better life than I will because the society is a little different now than it was when I was young, and it's certainly different than when my grandfather was here.

But I think with the children particularly, we have means of being able to use the history to kind of open their eyes up and see the world in a way that's more in keeping with a lot of the principles that this country was founded on, The Declaration of Independence, and the like. So I do it less for myself than it is just to try to effect some sort of social change, social consciousness, because it's not just an African American issue, it's an American issue.

Harmony Hunter: Richard, thank you so much for being here today.