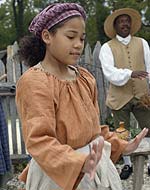 Many West African cultures make landfall in colonial Virginia, where they adapt and adopt traits that will form the basis of a new African American culture. Historian Rose McAphee describes the blend.

Our good friend historian Rose McAphee is back on the show today to talk about the history, culture and customs of a people who have contributed greatly to what American culture and society are today. Rose, welcome back, thanks for coming.

Rose McAphee: Thanks for having me.

Harmony: I wanted to think about African culture in Africa before the point that it comes to America. We know that there are some very distinct familial relationships and patterns of living that are different than the European paradigm we're used to.

Rose: Yes. Well West Africa, and Africa being a large continent, is kind of hard to speak on any specific ethnic group, so I'll talk in general about kind of West African families. Basically in many West African societies, family is the most basic unit of structure, just like in any society, really, for that matter. Families are so important because your children are a way for you to be remembered, and that's your legacy.

So within many West African cultures, it was also important to have children. That is a way to keep your memory, to pass down things within the family and cultural traditions were passed down through the family as well. In some West African societies, according to John Mbiti in "African Religions and Philosophies," it was important that you had children.

When a woman maybe didn't bear children, that might be a cause for her husband to seek a second wife. It was not unusual in some West African traditions to have more than one wife. Polygamy or polygany, more than one husband. More than one wife was more common in that tradition. The wives had to be treated equally, the children equally and so forth. In some traditions there was the principal wife and the others were lesser wives if you will. Again, so family and children community very important.

That most important aspect of West African tradition, family, survives the West African trans-Atlantic slave trade into the Americas not so much in that families were allowed to be kept together as a family unit, but in that the importance of family was kept intact and passed on through the concept of fictive kin.

In that I, as an enslaved African, I'm brought to America. My family is left behind, but I'm put into a group of other West Africans. Maybe we might speak the same language, we might not. But after we've lived together for a while, we kind of form a kinship bond, if you will. Maybe often Africans might even assign kinship terms, "aunt," or "uncle" to people who are not really their blood kin, but who would serve in that capacity.

All those people are very, very important in child-rearing and in passing on traditions in West Africa and that importance of the extended family which takes on those cultural implications of fictive kin. When you're separated from your blood kin, that's what carries on and how it transforms into the Americas with the trans-Atlantic slave trade.

Harmony: Other strong components of West African culture are communal, really communal activities. Storytelling, community childrearing â€“ the phrase "it takes a village to raise a child" comes from this place.

Rose: Well again, because of the importance of the communal living in West Africa, villages are set up very often in a rounded shape with the central area being the communal area. That's where your rituals would take place, your ceremonies would take place, and the like. So that whole concept of communal living certainly would have been evident in most West African traditions.

Then that importance, as you said, of it takes a village extending beyond even the family and fictive kin also that affects the political and social structure as well, that whole village, that whole communal concept in that not as much like the Native Americans in that everything is shared ownership type of thing, but just in that we're making decisions that are going to be in the best interests of the community. Even with that, no culture or community is monolithic.

So even with that thought or that concept of having communal living, there are always going to be individual disputes and things. So there were judicial systems, and all those types of things that were set up in West Africa, Angola, with those first Africans and then some of the concepts of that would have been carried over into their interactions in the slave communities.

Harmony: So this whole rhythm of life gets interrupted catastrophically at the beginning of the slave trade. Then we have the very beginnings, the introduction of African culture into North America, into the colonies.

We have not just one tribe in West Africa that's being introduced, but several. They might have various languages, various cultural traditions. How do we see these cultures blending together, sharing some of their traits and becoming an American African culture?

So probably that time, right after the first quarter of the 18th century is when you begin to see those cultures mixing. Largely with African traditions, but splashes of others as well as a survival technique. Some things just don't transfer from your home country to a situation in which you're enslaved. So you have to adapt those life processes in order to survive and then pass on those adaptations to your children.

Family traditions are pretty much just shifting. They're being affected by the slave trade, but they're not being disintegrated or ending because of the slave trade. Religions in West Africa certainly would have been very different.

Many West Africans again â€“ and I can't say West Africa as a whole, because again not monolithic â€“ but many religions didn't, weren't necessarily animistic in that there's a spirit in every object, but they often believed that spirits can affect certain objects, or be housed in certain objects or certain things in nature.

And so the whole concept of religion certainly would have changed once they were brought here and introduced to those who were already practicing Christianity because there were some forms of Christianity in West Africa as early as the 8th century and the Coptic church.

And so I would say around that time, around the first quarter of the 18th century is when we begin the beginnings of what becomes an African American tradition if you will, begin to emerge here in Virginia. It happens different places in different colonies at different times, depending upon again the population and what type of activity those enslaved Africans are involved in.

Harmony: What can we say is distinct in this culture that grows up in America, of many African cultures coming together?

Rose: Certainly music. And many people harp on that one very strongly, music and something that becomes truly American, which is jazz. Which is that combination of European classical music of Afro-Brazilian music, polyrhythmic beats. All of that mixed up into what becomes uniquely jazz. Some of the food traditions, like okra for instance. Peanuts, those traditions we believe originated in areas of West Africa.

Language â€“ “tote” was a West African word. “Ok” can be traced back to a West African derivative of that particular word. So language certainly there are various words that are African. Foodways, music and dance certainly. I would say religion cautiously I would say in that I guess that melding again in the concept of again not there are spirits in every thing, but that spirits can influence those things.

Harmony: We think about history with an 18th-century focus here at Colonial Williamsburg. When we're studying that during Black History Month and we're thinking about Black history as it relates to Revolutionary history and the Revolutionary era, what do you think it's important for people to remember or to keep in mind as we're reflecting on this history?

Rose: I think it's important for people to keep in mind that African Virginians were aware of the political process and some of them are using that process. Elizabeth Key, as early as 1656 sues for her freedom. Like Mary Aggy, who in the 1720s requests benefit of clergy from the Church of England.

And many instances like that in which even as enslaved individuals they are using the institutions to their advantage to make life better for themselves, for those who come after them.

So that's what I would say to reflect upon: African American history as a part of American History. As we all grow together and as we look to the future. Thomas Jefferson and John Adams called even at their deathbeds they called America "The great American experiment." So we're still developing and growing in many aspects of our culture.

Harmony: Rose, thank you so much for being here today.

Rose: You're welcome, thanks for having me.

in People, Research and Publications | No comments