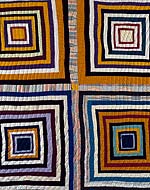 This is especially true of the work of African American artists, whose works span the 18th, 19th and 20th centuries. Our guest is Museum Manager of Education Trish Balderson, and she has developed a tour at the Abby Aldrich Rockefeller Folk Art Museum called African American Folk Art. She's here today to talk to us about it.

Harmony: Trish, thank you for being back on the program.

Harmony: When we talk about folk art, what are we describing? How is that a distinct class of art?

Trish: They are objects that were created as part of material culture. They were things that people were going to use in their homes or their businesses. But they were created primarily by artists that didn't have proper training in the arts, hadn't apprenticed under a master artisan. They were self-taught basically. So they used their own inspiration and their own ingenuity with the materials and the construction techniques and the final appearance of the objects.

Harmony: We have a whole gallery at the Abby Aldrich Rockefeller Folk Art Museum of all artists that are, as you say, self-taught and not formally trained. You've gone through and tried to create a tour that focuses on art that comes from African American artists.

Trish: Right. We have an interesting array of art that spans the centuries that has been either created by African American artists or depicts African Americans, or both. They range from ceramics, to portraiture, to quilts. So all different types of objects.

Trish: Oftentimes, recycled materials, as in the case of a couple of the quilts that we're going to look at. They're just materials that women had around their homes: old work clothes, old bed covers. Those types of things that were ripped up and used for these quilts.

We have a couple of sculpted pieces: a small sculpture and a relief portrait. Both of these are sculpted out of wood that would have been, again, a recycled material found by the artist.

Harmony: Do we find that artists working in certain regions tend to put their hand on a certain type of material? For example, do you know that a southern carver will often use pine?

Trish: In the case of one of the ceramic pieces that we'll be talking about, the material that was used was stoneware clay and the particular firing technique is one that is distinctive to that part of South Carolina. It's an ash-glazed effect where sand is thrown into the kiln toward the end of the firing process. That creates kind of a drippy, foamy look to the outside of the pot.

Harmony: When you created this tour, how did you choose the objects that you wanted to make sure and stop and talk about?

Trish: I do try to do it in a chronological way so that we start with some 19th century objects, in particular a ceramic jug created in probably the 1850s by a slave potter. There's also a little sculpted piece that was created about that time of an African child, a seated child. We don't know if that artist is African American or Caucasian, but it does depict an African American child in this mid 19th-century time period.

Then we move further up into the 20th century with some quilts that were created around the 1970s or so, and those are the ones that were used from recycled materials. They come from a very, very poor part of the country, and these women are descended from slaves and have learned the traditions of quilting from their mothers, from their grandmothers. It's something that has been passed down really since slavery in the early 19th century for that area.

Harmony: When you consider this group of objects as a whole, as a collection, what do you feel it tells us about the history and the chronological progression of both the art and the African American community through time?

Trish: There are objects that we know quite a bit about. We know a bit about the artists and we know a little bit about the work. There are other objects that the history of them are still emerging. For example, one of the, a couple of the works that we're going to be discussing in terms of a new exhibit that's going to be opening in February are two paintings in our collection, that up until this past year, we didn't know who the artist was.

That has been researched and definitively proven that a white plantation owner in South Carolina painted. One picture is an individual slave, the other is a slave scene of a group of slaves dancing in their free time. Research has been able to provide us with new information where we can pinpoint not only the artist but where they were painted and more precisely the time frame in which they were done.

Harmony: So the group scene you're talking about is a painting that we call "The Old Plantation," and it's a very vibrant scene of a group of seven or eight slaves. We have learned, as long as this painting has been known, we've learned so much from it. From the depictions of the people, the clothes that they're wearing, the tools that you see in the background, the instruments that they're holding. We have new research now that tells us even a little bit more about the artist.

Trish: Right. We know that it was the plantation owner that did this picture, so he obviously was watching or part of the scene that was going on in front of him. There had to be a certain amount of comfort between the slaves and the slave owner for them to allow him to be part of their private activity, I think.

We also know from research that’s been done that on this particular plantation and among this family, most of these slaves had been part of the plantation for quite a while. So the individuals that were depicted were probably could have been related. They certainly had some sort of a network between them: friendship, family, whatever. But they were well acquainted with one another.

Harmony: What led to the discovery of finding out who the original artist was after so many years of not knowing?

Trish: Two years ago, we acquired another work, that in studying the image of the single woman in this particular painting, were able to determine that the exact same artist, the same technique, a similar type of paper but the depiction of the individual looked just like the faces that we saw in "The Old Plantation." This portrait is known as "Ms. Bremme Jones." This is an elderly woman and there was handwriting on that painting as well.

So one of our librarians here at Colonial Williamsburg started to do some searching. She went back to the object records. She used her genealogy skills and she was able to figure out through records, through handwriting analysis, through close observation of these paintings enough information to be able to glean who the artist was.

Harmony: So discovery is ongoing. There's always something new to see.

Trish: Absolutely. By looking at a work of art with fresh eyes, with a fresh perspective, will sometimes bring information. We often when we give tours at the museum, learn new things from the people on the tour. They're able to bring their own experiences, their own knowledge and make us look at art in a different way that makes us go back to re-researching the information. So everybody can be a part of the discovery process.

Harmony: You've created this tour, you obviously have a passion for these objects and the stories that they tell. Why should people come and see the African American Folk Art tour?

Trish: Because I think there is a lot of information below the surface of the object. They're interesting to look at. They are diverse in the types of objects, but there's so much more when we start talking about the artists, when we start talking about the people that may be depicted in the art. There is just a lot more interesting information, and it will make for a fun discussion for the people on the tour as well.

Harmony: When can people come see this tour?

Trish: It's going to be offered starting January 31st, Mondays at 3:00 through February 21st. So for those four weeks at 3:00 on Mondays.

Harmony: Trish, thank you so much for being here.

in Archaeology & Conservation, Miscellaneous | No comments