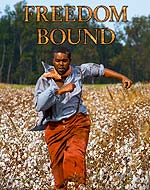 Slavery gains a foothold in the American colonies as early as 1619. In the years that follow, laws and resistance grow around the institution with equal determination. Dr. Cassandra Newby-Alexander discusses slavery’s early path.

Harmony Hunter: Hi, welcome to the podcast. I'm Harmony Hunter. Wherever history has seen slavery, it has also seen resistance to slavery. No matter where the institution has existed, people have fought against it to fulfill the universal human desire to be masters of their own lives.

We're talking today with Dr. Cassandra Newby-Alexander, a scholar and professor at Norfolk State who has done extensive research on the history of African Americans in Virginia. Thank you for being on the program.

Cassandra Newby-Alexander: Thank you so much.

Newby-Alexander: You know, the whole history of how Africans really transitioned into this country is filled with a lot of myth and a lot of scattered information. In fact, most people like to date the record that John Rolfe wrote to John Smith when Smith was out of the area and Rolfe was, in a sense, overseeing things in the Jamestown colony.

He mentioned in August of 1619 that 20-odd blacks arrived at Old Point Comfort. And that was all he mentioned. Then he went on to talking about some other things. Well, he doesn't mention that they're slaves. He just mentioned that they arrived here, and presumably of course there's a whole history that's now been recovered about who these people were, where they came from, and how they managed to be on the ship that arrived at Old Point Comfort.

I always tell my students that we don’t know really when they arrived. But certainly at least we have the first documented evidence that there were Africans who would eventually be a part of the Jamestown colony. We know that in the 1630s when there were blacks who went before the courts, they were all treated as servants, as opposed to slaves.

Newby-Alexander: There are, I would say, court cases that provide us with some indication as to where this is going. You have to understand that England was a class-based system. People knew what their places were in society, and the American colonies kind of upturned that.

A number of very wealthy â€“ not very wealthy â€“ but some wealthy people or people with at least status in England came to the American colonies first to try to find gold -- that's what they were looking for in Jamestown, they didn’t find that, they found fool's gold, not real gold â€“ and then when tobacco really took off with this hybrid breed that John Rolfe created they found a way to really enrich themselves through that.

But the idea was that they would use the white, indentured servitude as their laboring force. But then when these Africans started coming in, they began to run away along with the white indentured servants. This created some problems, because it was ok. We saw early on it was ok for a white indentured servant to serve out their time as a servant. They would always get some sort of land after they finished. This was their headright, so that they wouldn't be a burden on society and they would be productive. Many of them did very well, got a lot of money, became prominent citizens, would even serve in the House of Burgesses.

Now the Africans, of course, not only being of a different, in their minds a different class, but a whole different group of people, were seen as not having the same access to the law that English people had. You would see this gradually in the court records. The Magna Carta, of course, is the document that said that English people could not be enslaved. So the court started looking specifically at the language and interpreting that and really making sure that when they defined English men that they really meant ethnically English men.

Harmony: What legal rights would a slave have had?

If an owner, for example from Virginia, went up to Massachusetts, and said, "Ok, this person is my slave, I want to bring them back. What are the procedures for making that happen?" Since each state has its own extradition policy and its own court system. So the Federal Government began passing laws clarifying exactly what process should be used.

But in our system of slavery, if you were seen as a slave, you had no rights as far as the court was concerned. You could not bring a lawsuit, and of course that was clarified most specifically by Roger B. Taney with the Dred Scott Decision of 1857.

Harmony: When do we see the Underground Railroad begin to form and build?

There's this imagery we have of the Underground Railroad existing everywhere in the country. But the majority of people who escaped, escaped from the upper South. That would include Kentucky, because they were crossing over the Ohio River. Technically the upper South is seen as Virginia and Maryland. And the vast number of people who escape, escape from Virginia and Maryland.

Those who were living contiguous to a Northern state did so on foot or by cart or by horse, those who were in port cities like here in Hampton Roads, they did so aboard ships. Same thing was true in the Washington, DC area, and the same thing was true in different parts of Maryland. So if they were near any kind of port area, that was a big, big center for Underground Railroad activity. The people in those areas made contact with the people in key Northern areas. The folks in the Northern areas, they were all connected to these abolitionist societies.

The Philadelphia Abolitionist Society, for example, created a vigilance committee. The secretary of that committee in the 1850s was a man by the name of William Still, who recorded the names and a lot of facts about people who had passed through his station. What they did was, they created a network. They had contacts in different places in the North as well as contacts with people in the South: some of them free, some of them enslaved, some of them white, some of them black.

Newby-Alexander: You know, when the founders of our nation established the principles and precepts and of course when they wrote the Constitution, it was really an outline. It was an outline of how to govern. America is a set of ideals. There were some who actually wrote that we have an imperfect nation, and these ideas are goals.

And I would say that the Underground Railroad and the whole effort to end slavery was seen as a violation of the very basic precepts that, "we hold these truths to be self-evident that all men are created equal." It violates that, and their effort was to undo that violation.

I think that as Americans, we like to see that we're the good guys. Even when we do wrong, there are a group of people who will champion our better natures. So I think that's why the whole idea of the Underground Railroad has captivated us. That's why so many myths and stereotypes have emerged, because it is so romantic. It is so uplifiting to believe that people were willing to risk even their lives to help other people be free. That is the very essence of what we say we stand for, but often fall short of.

Harmony: You can learn more about the history of resistance to slavery in this month's Electronic Field Trip, Freedom Bound airing February 10th at history.org/trips and on local public broadcast stations. Thank you so much for being with us.