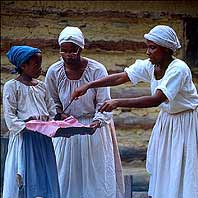 Harmony Hunter: Hi, welcome to the podcast, I’m Harmony Hunter. Storytelling is an important part of sharing cultural values and lessons. “Papa Said, Mama Said” is a Colonial Williamsburg evening program that focuses on the oral tradition of the African American community. Storyteller Art Johnson is a featured performer in the program, and he’s here with us today.

Art, can you tell us a little bit about this program?

Art Johnson: The idea of “Papa Said, Mama Said” is to show the audience how stories were used to teach morals and values. Slaves did not get what we think of today as a standard education of reading and writing, but they still wanted to impart to their kids things that they felt were valuable in learning, like the truth, honesty, respect, sharing, looking out for one another. They would take these stories that came from Africa, and they would share them in an African-American way with their kids. So they would teach them how to have these morals and values.

Harmony: What do you like most about being part of this program?

Harmony: Can you tell us a little bit about the story we’re going to hear today?

Art: The story I’m going to tell today is about how a slave wants to grow something on his own for his family, but typical of most of these plantation owners is that they never give credence that these slaves are smart individuals â€“ that if they weren’t slaves they would be valuable and respected members of the community who were bringing in finances into the community.

But they didn’t think like that. They thought they were ignorant or dumb. You see this slave who takes a chance in asking the master to let him do something. And the master says, “If you want to do it, you have to do it my way. Well, he manipulates whatever he does to show that, “I did it your way, but you end up with the worst of it.” Until he gets to the point where the master has to trust him and see that he’s smart enough to trust him. And that’s why it’s called “Why Can’t We Just Share?”

Harmony: And now, Art Johnson with “Why Can’t We Just Share?”

Art: Once there was a slave by the name of Jack. Jack mostly stuck to himself, he didn’t do much of anything other than do what was required as a slave in the fields.

Well his master was Master Charles, but most folks called him Master Charlie. At this particular moment, Master Charlie had come into a great fortune. He had gained some extra land on the north side of his property. Well Jack heard about the master’s good fortune, and he went to Master Charlie, and he said, “Master Charlie, may I work some of that land for myself, that I may grow some vegetables and food for my family to eat?”

Well, Master Charlie looked at Jack in amazement, for he had never heard Jack say anything. He said, “Jack, you are about as dumb as a slave can get. You don’t know anything, Jack. You barely talk to anybody, you barely do anything, you do only what is asked. Why would I trust you?”

Jack said, “Master Charlie, whatever I grow, I will give you half of.”

Master Charlie looked at Jack and said, “Whatever you grow? You can’t grow anything without somebody telling you.” He said, “Look. If you want to work the land, whatever you grow, I want the top. You take the bottom.”

Jack looked at Master Charlie and said, “Master, why can’t we just share? Whatever I grow, you get half, I get half.”

Master Charlie said, “If you want to grow something on that land, I get the top of whatever you grow, and you get the bottom.”

Well, Jack said “Ok.” Jack went about his way. Came the spring, he started getting the ground ready. Came late spring, he started planting. And the water came down like God had been talking to Jack. Come about mid-summer, plants started growing and everybody was waiting to see what Jack was going to do.

Jack pointed to the two barrels. Master Charlie looked at the two barrels and he looked down into them, and all of a sudden he got red. He said, “Jack! What did you grow?”

Jack said, “I grew potatoes. What you got is the leaves from the potatoes, and I got the potatoes that grew on the bottom.”

Master Charlie said, “Oh, you think you smart, don’t you?”

Master Charlie looked at Jack and said, “Jack, if somebody isn’t telling you what to do, you don’t know what to do for yourself! You barely go around here knowing anything and you want me to let you take all of that and want to share.” He said, “Whatever you grow, I want the bottom. You take the top.”

Jack looked at Master Charlie and said, “Why can’t we just share?”

Well, Master Charlie said, “If you want to grow anything on that property, you do as I say. You take the top. I’ll take the bottom.”

And Jack went on his way. Well the next year came around. As soon as winter stopped and spring started coming, Jack started clearing his portion of the land. Late spring came in, and ah, he started planting. Like God had been talking to Jack, the rain started coming down. Come about mid-summer, his crop was growing and growing and growing. All the other slaves were looking to see what Jack was going to do.

Jack took up his crop. He had eight barrels, and he took his wagon with the eight barrels and went to the master’s house. He took four barrels off, and put them on the porch, and kept four of them on the wagon. He knocked on the door and said, “Master Charlie, come on out.” Master Charlie came out, and he said, “Here are your barrels of the crop. You wanted the bottoms and, well, I took the tops.”

Master Charlie smiled, and he looked at those barrels. All of a sudden, the more he looked, the redder his face got. He looked at Jack and said, “Jack! What did you grow? All I see in here are roots!”

Jack said, “Yes, you said you wanted the bottoms, and I’d get the tops. So I grew cabbage. I got the cabbage and you got the roots.”

Jack knocked on the door, and he said, “Master, why can’t we just share? You get half, and I get half.”

Master Charlie looked at Jack and said, “If you want to grow anything in that land, you give me the bottom and you give me the top. And you take what’s in between. Sharing â€“ you barely know what to do with yourself.”

Jack went on his way. Well, springtime came, and Jack started clearing the land, getting it ready. Then the end of spring came, and he started planting and planting, and ooooh he was planting: dropping seeds, dropping seeds. Well, May came and all of the sudden God started dropping rain down on that crop. He had grown this tall crop and everybody who passed by could see it. Well all of the slaves was wondering what was Jack going to do with this crop here?

Well Jack harvested the crop, and he had 16 barrels --16 barrels. He had to take two wagons and get someone to help him. Well he pulled those two wagons up to the porch. He took eight of those barrels and set them on the master’s porch, and he kept eight on the wagon. He called Master Charlie out. He said, “Master, Master, I’ve got your crops.”

He said, “I grew corn. You got the stalk at the bottom and the silk at the top. I got the corn in between.” You said you wanted the top and the bottom, and I would take what was in between.”

Well master put his head down. He looked at Jack and he said, “Jack, next year, whatever you grow, just give me half of it. Let’s just share.”

From that point on, for the years to come, whatever Jack grew, master would get half. And that’s how master learned to get whatever Jack got, because Jack shared what he had.

Harmony: For more information about this program and all of Colonial Williamsburg’s programs, visit history.org/visit.