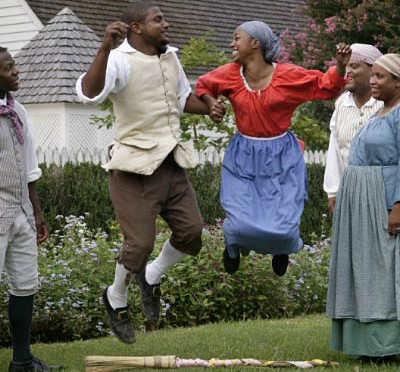 Harmony Hunter: Hi! Welcome to the podcast, I’m Harmony Hunter. Slavery was an institution that robbed African Americans of the civil rights that white colonists enjoyed, and marriage was among them. But that didn’t mean that enslaved communities gave up on marriage.

They came up with their own ceremony, and training specialist Rose McAphee is here with us today to talk to us about the Jumping the Broom ceremony. Rose, thank you for being here.

Rose McAphee: Thank you for having me.

Harmony: Tell me a little bit about the background of jumping the broom, and how this ceremony came to be in place for a community of people who weren’t able to enjoy the legal right of marriage.

Rose: Well, there were many ways that people would seek out a non-legal form of marriage not just enslaved people but sometimes people who were poorer. Sometimes they would do alternate types of ceremonies. We can trace back to similar ceremonies in West Africa, where they would place brush over the door and as a way to keep out spirits and also the broom would sweep away bad spirits and evil spirits. So it was thought that placing the broom over the doorstep and jumping over it would give you luck, keep out the bad spirits and the like.

But again, not just in Africa. When I was doing research for this particular program, I found out that 19th-century Scottish workers jumped the broom. Sometimes people were being married just between the handles of two plows. They were right in the field and the master would say, “That’s your husband, that’s your wife, now you’re married.” And that was it.

But jumping the broom seemed to take off and become a regular type of wedding ceremony, particularly for enslaved African Americans. We find most of the documentation in the 19th century, but we don’t feel like they jumped up in 1800 and said, “Let’s start jumping the broom.” It does have some background, and so that’s what my research has found.

Harmony: So this would be a tradition that they carried with them from West African cultures.

Rose: Some parts of it are West African, but then it could have been influenced, for instance, if they were owned by a Scottish worker, from the Scottish rites as well. But we know specifically in West Africa the broom has very important significance of sweeping away evil spirits and the like.

Harmony: You mentioned the program that you have developed. Tell us a little bit more about that program. The man and wife that you’ve chosen to put in this program, are they based on historical characters, or are they composites?

Rose: The names are pulled from the list of names from Nathaniel Burwell’s inventory. We were wonderfully blessed with his daybook, his journal, letters and the like. So we were able to pull the names of individuals. Whether those two individuals actually jumped the broom, I cannot say. But they were enslaved people who lived on Nathaniel Burwell’s property in 1775.

Harmony: When created the characters for the two people to be married, what characteristics did you want to make sure that you brought out?

Rose: Well I wanted them to, to of course have integrity and dignity, even in the face of an institution like slavery in which their choices were limited, and so they had to make the best of what choices they had. I also wanted to bring out the fact that even though the marriages were not recognized by law, because family was so important in West Africa, that tradition of family was carried over.

It was an important survival technique for those men and women who were brought here under the institution of slavery and born here when their parents were enslaved or their mother was enslaved. Here after 1662, here in Virginia, the condition is passed from the mother to the child, and so I wanted to bring that out as well. I also wanted to bring out the importance of community in a situation where societal forces sometimes might split families.

There’s a line in the play that says, “We may not all be family, but we are all kin and we have to look out for Esther and Manuel and the children that they are going to have.” So again that importance of community also was something that we wanted to emphasize.

Harmony: How does the ceremony go? Is there somebody who officiates like a pastor would today?

And so he does that ceremony and then the two, Esther and Manuel, the bride and groom, they exchange vows, if you will. Not traditional vows like we would think of today, but they exchange words and a gift. Again, not a ring, because that’s more of a symbol of a formal marriage but just a token of their love and appreciation of one another is part of the ceremony.

Jumping the broom ceremonies could be anything anyone wants them to be, there’s no written down way that says you have to do A, B, C, D. I’ve seen the ceremony performed in which there were two brooms, one in front of the bride and one in front of the groom and they jumped to the middle. Then I saw of course were they were both standing on one side and they jumped over together, I’ve also heard that if you jump backwards you could get divorced. So it was as varied and as interesting as the people made it.

Harmony: So we have a wonderfully rich ceremony that involves the whole community and is full of meaning, but is not legally recognized.

Harmony: So what does that mean for an enslaved couple that are in a marriage that’s not recognized by English law, by American law? What do they lose?

Rose: Well, they just lose the ability of choice. The choices now belong to their masters, particularly if they belong to two different masters and might possibly be living on separate plantations. Even the ability or the amount of time they are allowed to visit with one another could be regulated by the master.

Now of course, you know, enslaved people also practiced agency, and they did things that made things better for themselves either by doing some extra errands for the master and then saying you know, “I’d to go visit my wife this weekend,” or something of that nature. And if they’re owned by the same master it’s a little easier.

But in the case of Esther and Manuel, Esther worked in the house, Manuel worked in the fields. So even being owned by the same master is not a guarantee they’ll be able to live together as husband and wife. So that’s probably the main challenge, they might not have the opportunity to live together in one place continually and the choices would be made by their masters.

Of course you see men running away, you see women running away. In fact, that’s most often when folks are running in the 18th century, they’re running to family members. But the disadvantage of not having a legal marriage is that the master could separate that family at any time.

Harmony: What if they had children?

But again, you have the instance of Matthew Ashby and his wife in which he marries her and then purchases her freedom, purchases her and then sets her free rather, with permission of the council. And so it’s varied in the interactions that folks could have, and always dependent, most often dependent on the master.

Harmony: Now was separation a big problem. If your children are the property of someone else, it’s your master’s prerogative to sell them.

Rose: Correct. He could sell them, he could gift them. It was not unusual say, for instance, if the master has an older daughter who’s becoming married, then the master might gift her a personal body servant of a young teenage girl, possibly someone she’s grown up with.

So there were interactions, master slave relationships that went beyond just that. Some of them were indeed friendships, but always with that with that reality that the other person has complete control over life, death, marriage or anything of that nature.

Harmony: Do you know how long it is until African Americans are able to have legal marriages that are recognized by the state?

Rose: Now free black marriages were recognized. If a free black married another free black that’s just like the wedding of any freed person. So freed blacks could marry. Enslaved people, not until after the Civil War.

Harmony: We don’t want to gloss over of course the really horrible parts of slavery.

Harmony: But I wonder if a program like this doesn’t allow us to say something about the resilience and the hopefulness of a community even though they’re oppressed.

Rose: Absolutely. Because again, parts of the program do deal with those very sensitive, very difficult topics that would be paramount in any enslaved person’s life, particularly when they’re thinking of jumping the broom.

But again, as we end on a hopeful note, that’s exactly what we want to show, that resilience, that agency, that self determination that that those enslaved individuals were holding on to in spite of the condition that they found themselves in.

Harmony: Is there any remnant of that historical ceremony that’s carried through in today’s culture?

Rose: Absolutely! In fact my daughter just got married in September and I performed the jumping the broom ceremony for them. So many people, not only African Americans, are putting jumping the broom as part of their traditional wedding ceremony. I also did a ceremony for very good family friends of mine who got married about five years ago. They had theirs at the reception.

So again, there’s no hard and fast rule of where you can do it, how you can do it. But yes, people are kind of reviving that tradition. There are actually how-to books, little modern books on jumping the broom, wrapping the broom. You don’t have to do all of that, but there are some modern references.

So people are beginning to bring that back into their ceremonies. In the case of my daughter’s wedding, as a way to recognize and honor those who had gone before us.

Harmony: Rose, thank you so much for being here with us today.