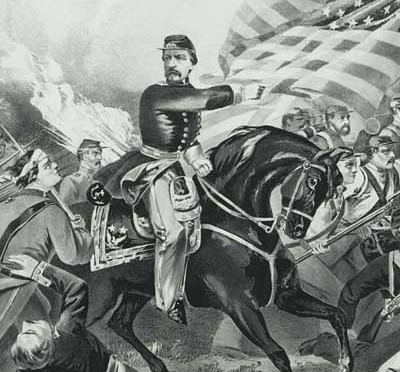 Williamsburg’s streets are rich with the history of two wars.

Harmony Hunter: Hi, welcome to the podcast. I’m Harmony Hunter. Today my guest is historian Carson Hudson. Carson, welcome back to the program.

Harmony: We’ve invited you here today to talk about a subject which we’ve never addressed on this show before, which is the Civil War. In many ways, the Civil War is the legacy of the American Revolution. Can you talk a little bit about how one war led to another?

Carson: That’s true. The Revolution started our dream of “All men are created equal,” and should be free and have the joys of liberty and all that. But it didn’t complete the dream. Because the founding fathers, unfortunately, left the question of slavery â€“ the question of property and slaves and all that â€“ unanswered. It was a sore which was festering in our country which brought this great division between the northern states and the southern states 80 years later: the Civil War.

Harmony: Where did Williamsburg find itself on that issue?

Carson: Williamsburg, obviously being in the South, took the Southern viewpoint, and slavery was here in Virginia up until the Civil War. The people of Williamsburg, however, there are even deeper Constitutional issues than slavery, although slavery is the main cause of the war. Let’s be plain about that. But there were deeper constitutional issues: states rights versus federal rights and things like that which go back to the founding fathers.

Harmony: And slavery is a large economic question, beyond the question of individual freedom, this is how their whole economy works.

Carson: That’s true of all the South, it’s the reason why the South is holding on to slavery as they’re coming into, if you will, the modern age. They’re holding on to slavery because it is an economic necessity. As Thomas Jefferson said, there was a question of holding a wolf by his ears. People thought that slavery was bad. There were many southerners who felt that slavery was bad, and it harmed both the white race and the black race. No one really had a good idea of how to get rid of it.

The abolitionists of course wanted an instant, “Let’s release the slaves.” You had the other people who wanted a gradual emancipation. You had people, such as even Abraham Lincoln, who were thinking about a plan to reimburse slave owners to have them release their slaves. All sorts of ideas, but nobody could come up with something. And we couldn’t reach an agreement. And it got to the point to where we started shooting at one another.

Harmony: Speaking of shooting at one another, the Battle of Williamsburg is a momentous battle for the people of Williamsburg. It’s not very decisive in a strategic way, but it brings big change to Williamsburg. They go from being their own people to being occupied by Federal forces.

Carson: Oh yes. Williamsburg, unfortunately, sat right in the path of the Civil War. Every Union soldier who’s invading Virginia and trying to get to the Confederate capital at Richmond has to march down the Duke of Gloucester Street to get there. That makes Williamsburg a very important place.

So the Confederates build some fortifications around the town to defend it, but they’re not really ever used as they were intended, because the Confederate commander here, General Johnston, decided that he didn’t want to fight a battle here. He was outnumbered, he felt he’d have a better chance defending the confederacy around Richmond. So he evacuates the area in May of 1862, evacuates Yorktown and wants to evacuate Williamsburg and pull back.

But the Union Army, under General McClellan, is advancing faster than the Confederate Army is getting away. They meet up, it’s called a rear guard action right outside of Williamsburg on the 5th of May, 1862. What Johnston does, the Confederate commander, he turns around about a third of his army to hold the Union Army back while the rest of his army gets away. On that one day, May 5, 1862, you have a rather bloody little skirmish in the rain. It was raining heavily all day.

Harmony: The casualties and injuries from that battle were immense. Seven or eight buildings in Williamsburg later became hospitals to deal with those injuries.

Carson: More than seven or eight. By later standards of the Civil War, such as Sharpsburg or Antietam, or Chancellorsville or Gettysburg, Williamsburg was a skirmish. In many history books, it’s just a footnote. On that day, the 5th of May, 1862, there were 4,000 Americans who were killed and wounded in the woods and fields around the town.

That’s more than the population of the town by twice: twice as many people that were actually living in the town at the time. Well imagine that happening in 1862, when there’s no real hospital here in town to handle such a thing. There are no emergency services. I think we had one policeman here in town. There’s no fire department or anything like that. We were inundated with dead and wounded soldiers. The town couldn’t handle it.

I can say this honestly: virtually every public building in town â€“ the churches, the government buildings, and even private homes and the greens â€“ became hospitals. It was a mass casualty disaster area.

Harmony: What are some of the buildings that played most prominently?

Harmony: Are we treating both Union and Confederate wounded?

Carson: At first, it’s just Confederate, because the Confederates were defending the town. You have, you know, obviously Confederates coming back from the battlefield who are being treated. When the Confederates left the town, they had a very small ambulance corps which had come down from Richmond, and there were at least 400 Confederate wounded that were left here in the town.

On top of all that is, the Union Army came into the town, and from the battle you start to have more and more Union casualties that are being brought into the town. Doctors of the town, for example Dr. Robert Garrett, who lived on the edge of the town and who was the mayor of the city at the time, he was commended by the Federal authorities because on the front yard of his house he created a field hospital and he was treating both Union and Confederate wounded.

Harmony: We have some very vivid first-person accounts from people who were living in the town at this time, and the things they saw happening in the buildings that were part of their everyday lives.

Carson: We certainly do, yes. Mrs. Cynthia Beverly Tucker Coleman, who was a very avid writer after the Civil War, leaves us some impressions of what was happening during the battle and right after the battle. She lived in the St. George Tucker House on the Market Square, and she took it upon herself to visit wounded Confederate soldiers that were in the various hospitals.

One account, she goes to Bruton Parish Church, and she’s talking about the wounded who are laying out on the pews, and bleeding into the aisles and things like that. There are other women who, one woman for example, who goes into the Baptist Church hospital on Market Square, which was across from about where Chowning’s Tavern is today, and she finds a pile of arms and legs in the basement from the battle where the surgeons had been cutting in the hospital above.

Harmony: You can say that America largely was born during the Revolutionary Era, but it was sort of re-baptized during the Civil War. Can you talk about what the Civil War does to America as a Union?

Harmony: So we go from thinking of ourselves as a collection of sort of affiliated states to one united entity.

Carson: Yes, and it’s all because of that. And obviously, the big thing is, after the Civil War, Civil Rights. The African Americans are given the right to be citizens, rather than property.

With the upcoming of the 150th anniversary of the Civil War, the sesquicentennial, we are looking heavily at this period of our history and reexamining so many things, so it’s a good time for people to come to Williamsburg and look at Williamsburg in a different light, as a place where we not only began our search for freedom in the Revolutionary War, but where that came to a culmination in the Civil War. And it all happened here in Williamsburg.

Harmony: Carson, thank you so much for being back on the show, we always enjoy talking to you.

Harmony: Carson’s book is called “Civil War Williamsburg, and is available at history.org/shop.

in Buildings and Sites, Research and Publications | 2 comments