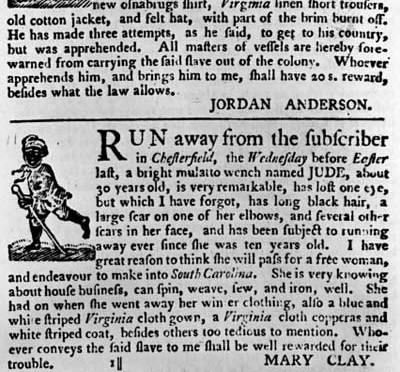 Runaway slave ads provide a wealth of insights into the life of the colonial slave. Historian Harvey Bakari shares some examples.

Harmony Hunter: Hi, welcome to the podcast. I'm Harmony Hunter. Today we're thinking about runaway slave ads, and African American Research Historian Harvey Bakari is back on the program with us today to talk about what they can tell us. Harvey, thank s for being back on the show.

Harmony: So, it seems like runaway slave ads are such a great tangible reminder, an evidence of a growing resistance to the institution of slavery. What else do we find in these ads?

Harvey: What you're finding in the ads are the information about the slave from the perspective of the owner, who has a vested interest in that enslaved person or persons as property that he wants to recapture. So he's going to try to provide information, whether it's about clothing, their mannerisms, their characteristics.

There's even such detail, there's one particular ad that even talks about "one toe is longer than the other toe." That much detail is given so that a person who wants to apprehend them would have some information to go upon.

Harvey: It is a good source to get to put flesh on the bones, if you will. Many of the other descriptions of African Americans are quite generic. But the ads are a little bit more specific, because, again, the owner wants to make sure that he or she can have that person recaptured. So they will do their best to identify them. The runaway ads are going to be a rich source that paints the enslaved community as individuals with different motives and different actions being taken through a period of time.

Harmony: So one of the things that we learn from runaway slave ads are the skills or the trades that a slave might have practiced.

So if they know that person has carpentry skills, shoemaking skills, all of these different skills, they know it's a great possibility that they would use those same skills. So again, that's another identifier that the owner will use to try and identify the person so that they can be recaptured.

Harmony: We also learn a great deal about clothing, about what the typical slave might have been issued.

Harvey: Clothing is interesting because people don’t have large wardrobes like we have today. So using the clothing as a way to identify the person is going to be quite effective. However, they do realize, being the slave owners, that the person could, as I found in one of these ads, could trade the clothes. So you bring the clothes with you but then you trade those clothes with someone else. Then you wear a different set of clothing as you run away. So the clothing can be effective in describing a person because it's not readily accessible and mass-produced as clothing is today.

This one is, “GREENWICH, Feb. 15, 1770. RUN away from the subscriber, in Gloucester county, the 5th instant, a very likely Virginia born Negro fellow named ADAM, of a yellow complexion, about 25 years old, near 6 feet high, by trade a sawyer and cooper; he had on when he went away a white plains waistcoat and breeches, knit yarn stockings, Virginia shoes, steel buckles, and a felt hat. He carried with him a light coloured suit of cloth cloaths, and other things unknown, and some books; as he can read and write an indifferent hand.” So yeah, that talks about some clothing he brings with him as well as his skills.

Harmony: Just encapsulated in that one ad, we see so many of those illustrating qualities which can let you put your finger right on an individual. It seems so specific to me, it's surprising, down to these qualities and these traits, even if someone is trying to begin a new life under a new name, these skills would still identify them.

Harvey: Exactly. As a matter of fact, there's one advertisement in 1775 in the Virginia Gazette, a runaway from Williamsburg, another identifier is skin color. They will talk about mulatto, biracial, and they'll make distinctions with mulatto. They'll say, “A dark skinned, mulatto, or a light mulatto, or a yellow.”

In this case they're saying she's, “A light mulatto girl named Jenny, and she's about 16 years of age, and she has a very bushy head of hair. And when frightened she looks down, or has a downward look. She is well known in the neighborhood of this city, Williamsburg, and a more particular description of her is unnecessary.” Which gives some indication that everybody knows who she is. So sometimes, your appearance that can be a hamper to you running away.

And then there are some other interesting ones that we learn. From Yorktown 1725, and there was a young fellow, his name was Mingo. He was again, yellowish complexion. Slim made, about 15 years of age, and he went off with a light-colored Russian drab coat. But he was also seen about Hampton and pretended that he was sent down to wait on a gentleman. Whoever apprehends the said slave, delivers to Mr. Jacobs.

But the important thing here is that it says right at the end, "The said slave has been outlawed."What that means is that he's wanted dead or alive. So this 15 year old could be retuned dead or alive for reward. So that's the worst thing you could do for a runaway is to have him outlawed. Because sometimes owners would give more money to have them back dead than have them back alive.

But you also see as you go through slave owners who believe they've been loyal to their slaves, and cannot imagine why would they run away. They're just flabbergasted. It's like, “I've done everything for you, why are you going to leave me? I haven't given you the lash.” So some of them are just dumbfounded when their slaves run away.

Harmony: What strikes me about these runaway slave ads is that it's hard to know how to feel about them. They're such an amazingly rich source of information, and they're written so vividly that it really does give you a picture of an individual. But at the same time, it's almost chilling how specific they are, and how little chance a slave would have had at running away and trying to establish himself elsewhere.

Harvey: The important thing, I would say, about the runaway slave ads is that for many African Americans these ads are very informative, but they're also very personal, because you don't know if any of those people are your ancestors. And if you happen to find one that's your ancestor, then it's not just a runaway ad. It captures something about them that you would have otherwise never known.

There's an oral tradition in my family that some of my folks ran away. So if I were to eventually find an ad that identified my ancestor by name, then of course that means something more than just an academic study or a collection of facts. So there's always that mystery. Because there were some people that escaped that were successful and some people that weren't.

If you're one of the descendants of one of the people who was successful, well their escape is part of your legacy, part of you being here. So it can be looked upon, these runaway ads, in different ways. In the end, those are very rich stories. You do get a better picture of the drama of the life of the enslaved person. You do get an insight into the perspective of the slave master of his enslaved people and the relationships as well.

It's a very rich source of information for studying. So that you can move beyond the slave and move more towards who was that person: that mother, that father, that sister, that brother.

Harmony: Thanks so much for being here today.