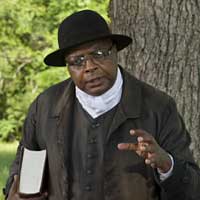 Lloyd: OK, you got to be a Baptist preacher with an all-black Baptist church, which had to be a threat to slave owners.

James: And so, we have it documented. In 1781, a man by the name of Aspen -- he’s an accountant -- he came through to register the Baptists in Virginia. He has Gowan documented with a congregation of 200 members, and he is the leader of that congregation. Now, the irony of this is the fact that he’s a slave. So, he must have had permission from Jane Vobe, his owner at King’s Arms Tavern, to have this congregation.

So the real question is, what is it that Mrs. Vobe, you know, what is it about her that makes her really different than a lot of slave owners here? You know, what is that relationship like? We know that Thomas Vobe died in 17 and 50, and left her in great debt. And, normally, when a master dies, slaves are sold to pay off the debt. But the question is, what happened after that period of time? Because in one year’s time, for some reason, she paid off that debt. And I mean, it was a tremendous amount of money. Did the slaves help her? Did Gowan’s mother help her? What was it that allowed her, later on, to allow him so much liberty? To go about preaching, knowing that wasn’t encouraged, then, later on, form a congregation, right after the Revolution.

And that congregation grew from 200 in 1781 â€“ we have it actually documented â€“ meeting in 17 and 76, kind of gathering as a group in Greensprings, and then moving to Raccoon’s Chase, closer to the college here, the College of William and Mary, and then into town by Jesse Cole later on. But that congregation grew from 200 in 1781 to 500. That’s the second-largest Baptist church in Virginia, black or white.

In 1791, he charters the church with the Dover Baptist Association â€“ this is an all-white Baptist association â€“ he charters his church. It’s accepted in 1793. And, ironically, in that same year, that’s when David Miller, who inherited Jane Vobe’s estate when she died in 1787, gave Gowan his free paper, his manumission paper.

Lloyd: I am curious now. You have raised the question of what the owner of Gowan Pamphlet did. She paid off a debt that, theoretically, was more than she could pay off.

Lloyd: He went on to be, probably, the most successful Baptist preacher of any race. That’s a mystery.

James: That’s a miracle, and a mystery, too. Well, you know, Jane Vobe -- it’s not really ironic that Jane Vobe was able to pay off that debt in a year. She’s a Moody, M-O-O-D-Y. They are tavern keepers, and she grew up in the tavern business. I always said she had some business head in the family, and probably if Thomas had listened to her, they’d be a lot more profitable. But, that’s why Jane Vobe was able to bring that tavern from sort of the doldrums in 1750, up to one of the most prominent taverns in all of Virginia.

That’s why you have, in that tavern, frequent in that tavern: General George Washington, Patrick Henry, Thomas Jefferson, General Rochambeau, Lafayette. I mean, she’s entertaining some of the very powerful elite, the people here. And they write about it, how well Jane Vobe is run. The irony is, that this is a woman in the 18th century that has a very powerful position as a tavern keeper. Christiana Campbell, the same way.

If you look at their documentation in the primary sources we have on these people, their slaves are treated a little different. It’s more of a negotiation. They’re allowing them some humanness. And I’m wondering if it’s because they have sort of an understanding that most slave owners don’t have. As, maybe being a woman in this society, having gone through some of, maybe, the oppressions. You know, of not being able to vote. Not having a say-so in the household, except for the management of it, but in society in particular.

Maybe they kind of understand, from a sensory standpoint, the slave’s predicament. And maybe they are treating them in a much different manner than most male owners. So this is something, again, another science we are looking at, to try to figure out the psychological, here -- the reasons why slaves were treated different than other slaves, and why these slaves are not sold as frequently, why they are allowed more liberty. And someone like Gowan, to rise from his condition as being a slave by law, here, to being, as you said, one of the most prominent preachers in America. I always say he came from being someone’s piece of property to being a citizen, which he did, and a very prominent citizen here, yes.

Lloyd: Did he ever get his freedom?

James: Yes, he did, in 1793, David Miller. It was ironic, because the monthâ€¦ 1793 is very interesting, because it’s the Haitian Rebellion. Toussaint L’Ouverture is down there, and it’s a bloodbath in Haiti. They call the nation and society to repatriate slaves that will get their freedom. Free blacks to Africa is really starting to bloom. It’s just a very interesting time.

And so, Gowan is in this moment where he’s receiving his freedom at a very volatile time. And when most people after the Revolution are headed out West to grab land, and to make their lives out westward America, he stays here. And he is here, growing his church, and it is a movement, because he now has churches he’s started all over. It’s a powerful movement. They have connections in Kingston, Jamaica, Nova Scotia, Sierra Leone in Africa, these First Baptist Churches are started all over the place. And that has a lot to do with the home base -- and that’s Williamsburg. Williamsburg First Baptist Church is the first black church in America.

Lloyd: I am curious if you have thought about it, and if you haven’t, let it go â€“ what would Gowan Pamphlet have become, had he been born white, and not enslaved? He obviously was a powerful and intelligent man.

James: That’s a great question. Sometimes, you fight harder when you’re oppressed. You fight to be recognized as being a person and a human being. And sometimes, that friction of that fight elevates you to places where you would never ever think you would be. What would’ve happened if he was white, if he was free? Would he have had that fire inside, that burning desire to do what he did?

I don’t know if I can even answer that question. I would think that maybe he would not have had that deep, burning fire to prove that he was somebody, and that he could be more than what people said that he was, or the labels that were put on him as being a slave here.

Lloyd: On the other hand, if he was allowed to develop his full potential, and his full intelligence, and he was encouraged to do things, he might’ve.

James: He might’ve been president!