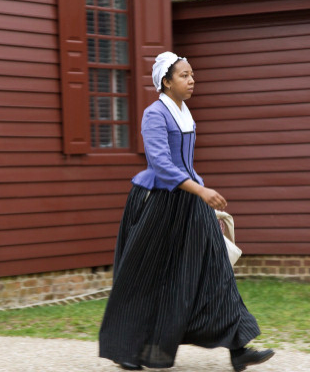 Making connections with hundreds of curious minds every day makes Hope Smith feel like a teacher with Colonial Williamsburg’s Historic Area as her classroom.

Lloyd Dobyns: Hi! Welcome to Colonial Williamsburg: Past & Present on history.org. This is “Behind the Scenes” where you meet the people who work here. That’s my job. I’m Lloyd Dobyns, and mostly I ask questions. This time, I’m asking Hope Smith, and at Colonial Williamsburg; she’s an actor-interpreter, playing roles at Revolutionary City, I think.

Lloyd: So that everybody will know, we knew each other when she was at Great Hopes Plantation, so you’ve migrated a little bit.

Lloyd: Who do you play?

Hope: Well, my primary character is a woman by the name of Eve. She was the maidservant to the wife of Peyton Randolph, who was a speaker of the House of Burgesses in Virginia, but first president of the Continental Congress. And I have other characters – Kate, who was a laundress at the Raleigh, a secondary character.

Lloyd: Everybody has two or three characters, right, at the Revolutionary City?

Lloyd: Because if you run it seven days a week, you gotta have a day off sometime. Somebody else has to play your character, you have to play somebody else’s. So it just goes back and forth, huh?

Lloyd: Okay. What is different doing street theatre on Duke of Gloucester Street and doing interpretation at Great Hopes Plantation? How has your life changed?

Hope: Oh, my goodness. You’re playing to a much larger audience. You’re drawing them in to the past with you, as well. Great Hopes, we were primarily third person except for special programs when people could meet a character set in a certain time, for a certain period of time.

But here, from the time we hit the streets at 10:30 until the time things wrap up at about 12:30 or so, you are in the past. And you are going through the first day: two years. The second day: six years, rapid fire. So you’re engaging guests with what’s going on at that time period. Talking about events, whether it’s, you know, news from Saratoga that the British have surrendered, or news that Lord Dunmore has taken the gunpowder and it’s happening very rapid fire and you have to engage people in an instant now, so it’s very different.

Lloyd: Do you like that? Engaging people, talking with them?

Lloyd: I keep asking you that because one time I want you to say, “I’m tired of it!”

Hope: (Laughs.) Well, you always have to remember that, for many guests, it’s their first time coming to see a certain program. And it may be the 50th time for us, but it’s that first time for that guest. Or, if it’s somebody who’s been before and they’ve come back because they were so impressed with the quality of what they’ve seen in the past, you want to make sure that that second, third, fourth, fifth visit is even better and will make them want to come back. So…

Lloyd: You’re out on the street, it’s hot, which it is in Virginia at this time of year. What do people want to know of you as you are engaging with them and staying in your time period, in character? What are they most interested in?

Hope: They’re interested in what the thoughts would be of an enslaved woman. When we get to talking and we can kind of share a little bit more, this is an enslaved woman who’s in the household of somebody who is probably second only to the governor, when you look at powerful men in this colony here.

And they want to know, well, what is Eve’s perspective, being in the household of Peyton Randolph, hearing the talk of these gentlemen who are revolutionaries. And how is she taking this all in, and how is she processing it, and how are things going to affect her. So, how we’re personally affected by the things that are going on when it’s coming to the revolution. And then eventually, the war and the consequences of war and sacrifices. They want to know how it personally affects this woman.

Lloyd: Some of the research I did for one of the projects I had actually said that the Peyton Randolph household had 28 servants. The governor’s palace had 26. So he may have been more powerful than the governor.

Hope:  (Laughs.) Especially when the governor falls out of favor.

Lloyd: Yeah, well, when the governor falls out of favor, that’s really more powerful. Do you have any trouble, ever, staying in character?

Hope: No. You have to make certain allowances if somebody comes up to you and asks you where the restroom is, just tell ‘em where the restroom is. Those sorts of things. And when people come into the Revolutionary City, before, as they come in, as they’re entering into this east end of Duke of Gloucester Street, they’re pretty well-informed that they’re going to be going into the past. But if it’s something where a person does need to use a restroom or needs water or needs some other immediate need, you kind of graciously do that, but other than that, it’s the period.

Like this morning, we were awaiting the arrival of our governor at the time, Lord Dunmore, and a lady said, “But, is this really your governor now?” and I said, “Well, yes, ma’am; he’s been the governor for three years now!” And her friend kind of whispered to her, “Well, this is, you know, Revolutionary City; it’s Lord Dunmore.” So, she’s getting the information but I’m not breaching the time period.

Lloyd: That’s – I think that would be difficult for me. Doing the character would not be particularly difficult, but trying to deal with people’s questions and stay in time. I’ll bet that can be kind of challenging sometimes.

Hope: (Laughs.) It can be, where you want to maybe tell people things that are going to happen, in the future. Things that you wouldn’t know at that time period, but if they’re things you know about a certain situation or about your character specifically, you kind of regret not being able to share that with guests. So it can be tough. But you have to maintain. You know the fact that you’re in 1774, or whatever the year is at the period, and not break it.

Lloyd: Is it more difficult to deal with adults or kids?

Hope: It depends. I would say that … it’s not usual that we have difficulties. A lot of times you have children, like we do programs that focus specifically on children and families in the afternoons. And yesterday there was a girl who was, I think she was 7 or 9, and she was asking about, “Well, what does it mean that you’re a slave?” And, you know, I tried to explain it to her – it’s myself and another colleague there – so for those type of basic questions, it’s easy to explain to children a very difficult thing if you’re allowed that opportunity to take the time and explain it to them.

Lloyd: You’ve been doing this for so long now. Do you think of yourself sometimes as an educator?

Hope: Absolutely. I have a mother and her two sisters who are in the education field as teachers and I have one aunt who will still ask me if I want to teach. And I say, “Well, I am teaching.” I have a classroom that is Colonial Williamsburg, and I have different students every day. And this is my method of teaching and sharing these women that I portray with hundreds – in the summer, sometimes thousands – of people every day. And that’s the best classroom there is.

Lloyd: I would, I think – you are too nice a person to do it – but I think I would say that not only was I an educator in this Colonial Williamsburg where I had this, but I got the kids to remember.

Lloyd: In some of the schools now, history is sufficiently dull to offend everybody, I guess. It’s just, I don’t know…

Hope: I guess, when you look at it – because history was actually always my favorite subject. Social studies, in elementary school – it was always, to me, stories about people. And, you know, when you look at something as dates, or this began here and ended there, I can understand where that’s not interesting.

But when you begin to look at it as the story of this person, or this woman, or this child, then it becomes interesting and then people can connect across time. You know, I may not have a lot in common with maybe the mother I’m talking to because we’re separated by time and distance or location, but we’re still mothers. And that woman can relate to me as a woman who’s an enslaved mother and maybe the challenges that I would face, she can sympathize with me and relate to me. So people connect with that, being mothers and fathers and husbands and wives and children.

Lloyd: What’s the hardest part of it, for you? Is there a hard part? I’ve never seen you when you weren’t smiling.

Hope: When I wasn’t smiling. Just to always maintain the level of quality and to represent the people that I’m portraying with dignity and honor and reverence. Even if, you know, there’s a certain amount of information that’s going to be available about people at any time, but in the 18th century, someone who’s enslaved, someone who’s a woman, you may not have all of the facts.

But that you fill out their lives in a way where even if everything isn’t exactly right with how old the person was, when they were born, still represents them as truly as we can in the 21st century. So to always maintain that if that person were here and seeing me portray that character, some of the details might be off but I still get across that sense or that essence of whoever I’m portraying.

Hope: I’m enjoying myself now, and I’ve been here a long time. So, I’m not sure.

Lloyd: But you still enjoy it?

Hope: I still enjoy it. I still love making connections with people whether they only meet me once, or whether they come back. There’s a couple this week that have brought their daughter, they’ve been coming for 22 years, which is how long I’ve been here. Now, I haven’t known them for 22 years, but they’ve been coming to the foundation for 22 years. And they brought their daughter to Colonial Williamsburg this weekend and she’s also involved at a history museum in Maryland. They’re like, “We want you to meet these folks that we’ve met and we come back every year to see how they’re doing.” And that’s special. Where else can you affect people like that?

Lloyd: They actually watched you grow up!