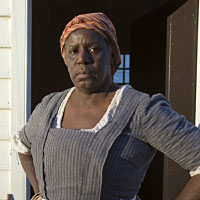 Valarie Holmes interprets Lydia Broadnax, a cook for one of Williamsburg's most influential men.

Lloyd Dobyns: Hi! Welcome to Colonial Williamsburg: Past & Present. This is “Behind the Scenes” where you meet the people who work here. That’s my job. I’m Lloyd Dobyns, and mostly I ask questions. This time, I’m asking Valarie Holmes, and in Colonial Williamsburg’s Historic Area, she’s Lydia Broadnax, which leads into the first question, who is Lyida Broadnax?

Valerie Holmes: Lydia Broadnax is a slave of George Wythe, who was one of the signers of the Declaration of Independence, but Lydia was also freed in 1787 by the same George Wythe, but she stayed with him in that time, and when he moved up to Richmond in 1791, she went to Richmond also.

Lloyd: Okay, that solves it for me, so she was the cook who could not testify against the useless nephew who poisoned George Wythe.

Lloyd: That has always been to me one of the fascinating stories of that period; that George Wythe was poisoned by a relative who essentially got away scot-free.

Valarie: Well, the one thing here, though, about Lydia is, we know that she, like you just said, that she could not testify against him, but, what’s really amazing, is that we believe she was the one who told George Wythe that it was the nephew that had poisoned him. Because George Wythe didn’t die right away; he died two weeks after the poisoning, so the nephew was really going to get almost everything in the will, but because Lydia told George Wythe that, he changed the will, so he [the nephew] didn’t get prosecuted by the law, but he didn’t get any of the

Lloyd: but he lost all the money that otherwise he would have gotten

Lloyd: to keep them from getting the money

Valarie: from getting the money, which wasn’t a lot, because most of the things were going to go to George Wythe Sweeney.

Lloyd: yeah but that would be sort of silly to try and poison two slaves who weren’t going to get much anyway. But George Wythe would be left alive -- your will doesn’t come into play until you’re not here any more. I’ve always liked that story.

Why do you think she stayed with George Wythe after she was freed?

Valarie: That’s the thing that’s I guess most intriguing to me, because that point makes me think that’s who we are today. This tells of a relationship between the two people, and it doesn’t have to be any other kind of relationship but something of respect. And that’s what I feel I want people to understand today, because that’s where the healing comes between the races in not thinking that, oh, we’ve invented something since Civil Rights in the 50s and the 60s, but that it goes back even into the time of slavery, that these two people could have had respect for each other even in such a horrific system as slavery, that they could have understood each other, that they could have been friendsâ€¦

Lloyd: But you don’t find many people in that day, who, without some cause, freed a slave, and the slave continued the same job, only now she wasn’t a slave, she was free.

Valarie: Right, and we think that she was the cook. That’s what research has come up with, not that we ever show any record that she really was the cook â€“ because in certain records, it talks about the cook of George Wythe, and then after she was freed, it calls Lydia the cook. So that is why they have put it together to make it seem like most likely she was the cook then and she remained the cook after him.

Lloyd: Would you have been the cook and something else? Would a slave in those days have done more than one job? As difficult as cooking was then, I think not.

Valarie: Well probably she could have done something else, but maybe not something that was skilled, but she probably wouldn’t have been the laundress, like you said, and the cook, because it would have taken too much to do those things, but also you have to think that if she is the cook, the cook is always having children in there, small children, so there could be the white children of the household, and the slave children of the household all in this kitchen helping this person start the fire.

I was actually working in foodways, because if I am going to portray a cook, I should know how to cook in the 18th-century ways.

Lloyd: That would be fun.

Valarie: It was really interesting because they had me beating eggs; I had to beat eight eggs for 35 minutes. I mean the people who are experienced in foodways, it takes 15 minutes, but my first time, it took me 35 minutes. But you think of having to watch the fire, also having to watch children, so for lack of a better word, there’s a kind of daycare going on. So, there’s other jobs, but maybe not skilled jobs like cooking.

Valarie: Well, I’ve only done it once, so I’ll find out tomorrow. (Laughs)

Valarie: Not to sound too overly spiritual, but I really believe it’s the Lord that brought me here, because there were no thoughts in me ever of portraying a slave. I mean I have an undergraduate degree in marketing, and my master’s is in the performing arts, and so I was thinking either a wonderful job in business, or Hollywood. I was never thinking of a museum.

I went to audition in a museum in Richmond, the Valentine Museum, and the lady who hired me there really introduced me to historical interpretation. We were doing the year of 1905, which was not slavery, but she was also the person who was in charge of the African American department here in Colonial Williamsburg, so she asked me to come and audition. I did come here when I was a child, but I can’t say I had any aspirations or dreams of being a historical interpreter, especially not to be an interpreter of slavery.

Lloyd: That strikes me that could be extremely difficult.

Valarie: I think it is, but I think it is very, very rewarding, and I have to give in my life all applause to Colonial Williamsburg because working here has made me change my thoughts, opinions of slavery, and to see these people as people and not icons. Even the people who are slaves; it really was this way that I felt an embarrassment or sadness in my heart about slaves, and I think that’s because of the way slavery was taught, and Williamsburg has changed that for me.

I always felt that the people who stopped the way they did the interpretation there was just healing, just a wonderful experience, because you started to look at these people as “this is my history ” if they were white. That’s why I loved working out at Carter’s Grove, because I felt the white interpreters there made white and black people come there and recognize that the slave quarters was a part of our history. And so you as a white man, the slaves are as much a part of your heritage as it is mine, a black woman. And vice versa for African Americans who came there who went up to the mansion, which is portraying the 1940s, black people could feel that this, too, is a part of my heritage.

Lloyd: How long have you been here?

Lloyd: Okay, in that 11 years, has interpretation for African Americans and the acceptance of it, or the rejection of it, changed in 11 years? Are we different now than we were 11 years ago?

Valarie: I believe so, and I remember, I guess I can speak for myself, and that’s all I can speak for, I don’t think I was here when they did the estate sale that we know as the slave auction. I think I came the year after that. But I remember reading in the newspaper and watching on the news and feeling like, “Hmmm, I know I wouldn’t be portraying a slave if I had to work there, and there’s no way now 11, 12 years later I feel like that, but I was feeling very, very torn, but after they did the interpretation, I thought it was amazing to watch the humanity of these people.

Lloyd: I’ve asked several people at Colonial Williamsburg, and all of them have said to one degree or another that the people who took part in that slave auction found it so troubling that they never did it again.

Lloyd: It was just too close. I have always been curious about that. Now, portraying a slave who was a cook in a nice house, probably the loveliest house in Williamsburg, you could deal with that, but I’m not sure I could deal with being sold.

Lloyd: That would really get to me, and I’m told it really got to the people who were taking part.

Valarie: That’s the thing that Dr. Ellis told me to make sure that I keep in mind when I’m playing Lydia, because as you said, she was in this wonderful house, and maybe I’m kind of likening her to Coretta Scott King, who we just lost this year, only in that I think it is amazing that this black woman [King] had four American presidents at her funeral. I mean that is just mind-blowing to me. Why I say that I compare her to Lydia is because that Lydia, being in that household, knew everybody we know as the founding fathers here in Virginia. These were people who came in and out of that house and she most likely fed, so her lifestyle in being in the household of a man that was well respected and an educator could be very different from other slaves, and like you said in being sold, where she did receive her freedom.

Dr. Ellis said you can never ever forget the other people, because when people come and see Lydia they are going to be thinking about all those other people, the stories we know about people being sold, or the people who were not living in this wonderful, beautiful house and that got their freedom but that had a very difficult. I’m not saying that being a slave, Lydia being a slave, wasn’t a difficult life, but I’m talking about people that may have been out in the fields, or didn’t have a master that sold.

Lloyd: She wasn’t chopping tobacco. That would have been the end of it for me.

in Food and Drink, People | No comments