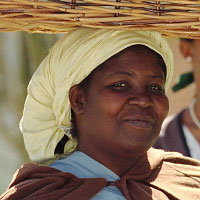 Jamaican-born Emily James has interpreted at least 16 different 18th-century women who learned how to survive lives of enslavement.

Lloyd Dobyns: Hi! Welcome to Colonial Williamsburg: Past & Present on history.org. This is “Behind the Scenes” where you will meet the people who work here. That’s my job. I’m Lloyd Dobyns and mostly I ask questions. This time, I’m asking Emily James, who is an interpreter of women. She has been more than 16 women in 19 years at Colonial Williamsburg. You may notice her accent. That’s because she’s Jamaican. How does a Jamaican interpret American women?

Emily James: Oh, that’s easy, because when you go back to the Middle Passage, slavery had been in the British West Indies over a hundred years before it came to North America, and therefore we here at Colonial Williamsburg, we in the department, we focus on the contribution of African and African American women, and therefore I was able to tell a global story. Most of these masters from England would end up in the British West Indies. Of course, they aren’t staying there very long because of the weather, the heat and such. They would have gotten foremen and bookkeepers and they would go back to England, and therefore we talk about the survival of these individuals.

Lloyd: That’s remarkable because we forget that. Now, everybody wants to go to Jamaica for vacation.

Emily: I know, but that was one of the richest sugar islands. You talk about Barbados, and then Jamaica supersedes Barbados. Once you get there as an enslaved person from a boat, you live five years, and you’re extremely lucky, if you survive seven years due to the hard work, the foods you’re being fed, the heat, and disease. And the men were always suffering from bad back, working on the sugar cane â€“ you pull, you bend, you chop, and the women, they were referred to as almost being barren. So when you hear about a ship coming over, where you’re dropping some of these people off to be seasoned, and broken in, and learn the language, by the time they get to the North American colonies it’s about time to die because they are overworked. For an overseer, the more work an enslaved person would have done, that is how the overseer is being paid, so they were worked to deathâ€¦

Lloyd: I have read that the slave captains out of Newport, Rhode Island, did the triangular tradeâ€¦

Lloyd: â€¦sold their slaves in the West Indies because they had to be replaced more often so they would do better business, and that was just plain overwork.

Emily: That’s right, and the English always were known to have a sweet tooth, and they could not do without the sugar.
Lloyd: Okay, you get here from Jamaica, in 19 years you have interpreted 16 different women. Do you have a favorite?

Emily: Well, most of my characters, because of my accent, (and of course it was deeper), I portray an individual who would be brought over from Jamaica. I talk about my African mother who did not survive the voyage, because to survive the Middle Passage you would have been a great survivor. So to compensate for the accent, I am able to talk about a global history and the slave trade, and I talk about myself being brought over on a merchant ship because my master â€“ well, the cook he had before died, and with me working in a mansion there, I was brought over by the slave ship captain and sold to him. And that’s one character, or I portray a character in [the home of] Benjamin Harrison. His nephew would have been one of the presidents of the United States. His daughter married the most powerful man in Virginia apart from the governor â€“ Peyton Randolph. So, there I portray Aggy, a known enslaved woman who lived and breathed on the Randolph property. So I talk about how many separations I have experienced to tell the life of an enslaved individual. So most of these characters, you use historical knowledge and information, but also you have to put life into their bodiesâ€¦so then you use historical content that happened during that period, and to compensate for the accent I tell this woman’s story â€“ not that she’s necessarily from Jamaica â€“ but to compensate for the accent, because we know some are dropped off seas... So there I portray Aggy, or my first character would have been Nan, a slave that was owned by Benjamin Powell that lived on the outskirts of town across from Miss Campbell’s tavern, for the city was a mile long and half a mile wide. And there Nan was his cook. So, I talk about me coming through the largest slave port in Virginia, which would have been Norfolk, and explain to the audience how an enslaved woman would have gotten here â€“ through Nan’s eyes, or in telling her life story. But my favorite character is Flora, one who I will now portray for “The Revolutionary City.” Flora is considered to be not only a cook but an herbalist. And this is tapping into my knowledge of herbs and medicine, so therefore I am able to tell her story at the Raleigh Tavern, where Flora would be highly intelligent, according to a diary we found in Roanoke, from a John Randolph, a distant cousin of the Randolphs “you can not underestimate the intelligence of these Negroes, because they have an art of communicating among their own kind.” You are seen but not heard, and you know to keep your mouth closed and your eyes and ears open. And especially when these burgesses get “into their cups,” then you know how to get the informationâ€¦or sometimes you pretend you are silly, or you’re an idiot. Let’s say sometimes if I’m insolent, he’s gonna send me to the fields, or he’s gonna discipline meâ€¦remember I am your cook, and I’m very skilled in herbs and medicines, and not necessarily to hurt you. There aren’t a lot of documentation of masters being poisoned that we can find, but I can send you to the necessary house for a fortnight if I’d like to, it would be my pleasure. (Laughs) These people are highly skilled.

Lloyd: How did Flora learn herbs? How did she become an herbalist?

Emily: Well, most often those skills would have been passed on from your mother to you, or let’s say your mother died during your birth, then there would be someone else to take you under their wing and raise you as their own, and therefore you have the fictive kin. You’re not really blood related, but your familyâ€¦much [as] in your life today, you probably have relatives you refer to as aunts and uncles â€“ not blood related but very close, as family. And this is happening in the black and the white and the native family, they’ll raise you as their own. Those skills are often time passing from father to son from mother to daughter or from maybe another kin or another member of the extended family.

Lloyd: You’ve been here for 19 years. Why did you come?

Emily: Well, I always have had a love for acting, and as I told Randall Pinkston, we did an interview, (I think that was Charles Kuralt’s third-to-last show) I told him that if we don’t tell the story, who will? I am really honored, and every day it is a blessing to know I enjoy what I do, I am being paid for what I do, and here at Colonial Williamsburg from upper management to my co-workers, they are family to me. I remember â€“ and maybe you can edit this out â€“ I lost my daughter to a traffic accident, and these people are my family. I don’t miss work. I am like a workaholic. I was numb, and I had a vice president coming in, you know, bringing cakesâ€¦I had just gotten my daughter a job at the Patriot gift shop, everybody was coming in, I was just numb. But on the way from the funeral home to the church where she was interred, I said to my mother “Mama, look behind usâ€¦” I mean the long line of traffic, and there was not a department I did not receive a wreath, or a card fromâ€¦ these are my family, they areâ€¦

Emily: Yes, and I enjoy what I do, and it’s an opportunity to tell a story, so I am blessed.

Lloyd: Do you tell much of theâ€¦you said you talked globally, do you talk globally about slavery, and the passage, and the tradeâ€¦

Emily: Yes, but when I give my information, I don’t knock you over the head with my information. It’s a story worth telling. It is American history. It is notâ€¦you cannot have European history or African history without Native American history; you have to combine them together. I don’t give you half an apple; I give you the entire apple. So I tell a full story â€“ and I talk about the injustices of slavery. It’s not what you do, it’s how you do it in a respectful manner, you respect the 18th century as well as the 21st century, so it gives me that opportunity.