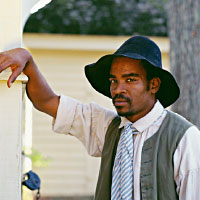 Interpreter Richard Josey talks about an enslaved man who became a valuable spy during the Revolution.

Lloyd Dobyns: Hi! Welcome to Colonial Williamsburg: Past & Present. We’re on location today to talk about the contributions of enslaved and free blacks to the American Revolution. Colonial Williamsburg this October celebrates “Brothers in Arms” with a weekend of 18th-century military encampments, demonstrations, and character interpretations. I’m Lloyd Dobyns on history.org. Today I’m talking with Richard Josey about a slave who might have been the first double agent, James Armistead.

He wasn’t exactly James Bond, but James Armistead proved to be a brilliant spy, and yet he is often overlooked or I guess ignored. Why is that?

Richard Josey:  Well I supposed a good reason is because there is so limited documentation on him, as to exactly what things he did that were specific to James Armistead. There were some other spies â€“ they were using Negroes at this time frame for spies on both sides, the patriot and the loyalist cause. But because of the fact that there is so little known about him. Actually, last night I was just reading some information about him. Before I even start to really speak on him, I have to go back and double check and make sureâ€¦like a birth dateâ€¦pretty much everyone is consistent with the fact that he was from New Kent, so he’s a Virginia-born, 18th-century black slave. It seems as though in the 1780s time frame he took it upon himself to want to join, and he asked his master if it was okay with his master if he could join the patriot cause. That’s when he linked up with the Marquis de Lafayette, and found himself on both sides of the war.

Lloyd:  I have two different sources. One says he started as a spy at the siege of Richmond and Benedict Arnoldâ€¦

Lloyd:  â€¦and the other says that he started at the siege of Yorktown. Where did he start?

Richard: Yeah, mostâ€¦ Kaplan, inTheBlack Presence in the Era of the American Revolution, from him as well as a couple of other sources, they all seem to say that Armistead started at the siege of Richmond. And first he started underneath Benedict Arnold, and that was kind of how he made his way to eventually getting into Cornwallis’ camp and overhearing all those sorts of things. Now, at some point in time, it appears that Cornwallis was actually under the impression that James Armistead was a spy for him.

Lloyd: That’s what I read, that he was a double.

Lloyd: Cornwallis trusted him so much he sent him over to the Americans, or the Continental side, and of course, he was spying for Lafayette the whole time.

Lloyd: He eventually changed his last name to Lafayette.

Richard: Yes, in 1784 â€“ 1784 was when he actually received his freedom, and he received his freedom largely due to correspondence that was received to the Virginia General Assembly by General Lafayette “â€¦for his services for information that was injuriously collectedâ€¦” In honor of General Lafayette’s push for him to receive freedom, he changed his last name to Lafayette. Most folks would know him as James Armistead Lafayette, given the 1784 name change.

Lloyd: What do we know about him before he started being a spy â€“ anything?

Richard: His master’s name was William Armistead. They were from New Kent. Again, one of the sources you might want to check into states that he was born as early as 1748, which makes it real interesting, because being out of New Kent, and being part of a plantation atmosphere working in the fieldsâ€¦it makes it real different than how we sometimes perceive history. For example, the intelligent Negro, if you will, being the one who was working for his master in the city, and not necessarily seeing the contributions of a farm hand, a field laborer.

Lloyd: Yeah, they are not usually very well respected for their intelligence level. Nor was it required, “go pick the tobacco and shut up.”

Lloyd: But you wonder how heâ€¦you know, being a spy isn’t that easy. You have to be quite careful, and really, if somebody catches you, they are not going to treat you kindly.

Richard: Exactly. Well you know the really interesting thing here, is that one thing that seems consistent with different historians, is that James is the name [we know], but when I look at James Armistead Lafayette now, I look at him as being one that potentially represents a great number [of black spies]. Because in the ways that spies are operating, it seems, it seems as though James was a waiter within the camp, serving the food and such and overhearing the conversations, then he would take that information back and not necessarily go directly to the lines, all the time. There were others, there was a group of Negroes who were doing some running for him, so he was, I would call him the master spy, in a sense, and he had other spies that worked almost in a sense for him. He kind of sent them off with information, and then coming back. It’s just proven to be a network now.

Lloyd: How do you think he was able to persuade Cornwallis that he would be useful as a spy for him? I mean that’s a selling job.

Richard: One of the things that I think that allowed James the ability to persuade Cornwallis of such was, in general, the British way of thinking at the time in regards to slavery. Ever since the 1760s, this whole idea of the British using slaves in the aspect of war, or getting back at these rebels here in the colonies has been something they’ve been talking about in Parliament as far back, as I said, as the 1760s.

So the way that they perceive this whole situation with the war going on and the fact that slaves aren’t happy to be slaves, and they thinking that slaves at any given time want to go against their masters, or go against the American cause. I think it made Cornwallisâ€¦that whole mindset seems to have made it easier for Cornwallis to accept the fact that this slave who doesn’t want to be in his position, and has known about all the abolitionist thoughts and sentiments in England, and such, I’m thinking Cornwallis is thinking, “We’re the British. We’ve come here to free you. Why don’t you help us?”

Lloyd: Hmmm. Okay, okay. So he convinced himself?

Richard: Right. Exactly. I think he was just convinced based on the fact that he could point the finger and say, “These are your masters, these are the ones that are holding you, these are the ones who sell your family off from you and put the lash to your back, and all of these sorts of thingâ€¦” And, you know, like you say, he kind of convinced himself. I can imagine he was very surprised at Yorktown.

Lloyd: Do we know whether he ever found out?

Richard: That’s one of those things that we really would love to find out. Of course, again, there are some sourcesâ€¦there are so many different points of view, so many thoughts in special regards to how James â€“ how he did what he did â€“ it is really difficult to know if it is a fact that Cornwallis saw him at the camp. A couple of pieces kind of allude to the fact that Cornwallis was surprised when he came to the camp, and he saw James Armistead there with a red coat on. But whether it was a red coat or a blue coat, or any of those sorts of details, it is hard to tell, and so what we have to do here is we just have to interpret and create a picture that people can associate with to see how the circumstance was.

Lloyd: You know from Cornwallis’ point of view, he’s just lost his army, he just lost the siege, he’s got so many problems you can’t even begin to think about the number of them, and then to top it all off, he finds out that his trusted spy was doubling on him.

Richard: Right, I can only imagine the look on his face or what it was that he was thinking. And, I hope I do come across something that says that â€¦maybe some memoirs of Cornwallis’ or something of that nature where we actually know that Cornwallis came to the camp and looked and saw him. That would be a very interesting thing.

Lloyd: Yeah, of course, if we want to, we can just make it up.

Richard: That’s how history works sometimes. No, that’s the whole thing. We try to be real careful with the history, and knowing exactly, for the sake of what a lot our guests like to hear in regards to the interactions and what not. We may actually in the course of a program speak to the fact that maybe Cornwallis saw James Armistead at the camp, because that is a very interesting point. For the “Brothers in Arms” weekend we are looking at actually having a program where we have James Armistead interacting with guests in the 1784 time frame after he has received his freedom, reflecting back on all that has gone on.

Lloyd: What do people ask you when you are interpreting James Armistead?

Richard: (Long pause.) A lot of folks ask one of two questions, the first question is why?  James, why would you be a spy for the American cause who are the ones who enslaved you? And of course for me the proper response is, “This is home. There is no other home that I know.”  Certainly, it is one thing to serve a master that you don’t know, for example, Cornwallis, or the British. But for him, for me as James, it’s best for me to serve the master I do know, potentially gaining my freedom.

Lloyd: So the first question is actually the Cornwallis point of viewâ€¦

Lloyd: Why would you do this?

Richard:  Right, or actually why would you do it for even Lafayette? And Lafayette clearly had a different mind set in regards to the institution of slavery anyway. But then the other question is “Well, James, after you got your freedomâ€¦after the siege of Yorktown, you went back home, back to your master’s property in New Kent. Why didn’t you just run off and be free?”

Why not? Well for me as James, the simple answer is family. The family is something that you can always have. You can go anywhere and everywhere that you want to go, but if you don’t have family, then you are just you.  I always portray James as being incomplete without his family.