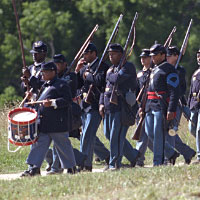 Interpreter Greg James discusses the determination of the members of an all-black regiment of soldiers.

Lloyd Dobyns: Hi! Welcome to Colonial Williamsburg: Past & Present. We’re on location today to talk about the contributions of enslaved and free blacks to the American Revolution. Colonial Williamsburg this October celebrates “Brothers in Arms” with a weekend of 18th-century military encampments, demonstrations, and character interpretations. I’m Lloyd Dobyns on history.org. Today I’m talking with Greg James about an all-black American army unit, the Rhode Island Regiment.

The first Rhode Island Regiment was the first African outfit in the Continental Army. Were they all free blacks, or were there enslaved blacks?

Lloyd: That’s a tough way to earn your freedom.

Greg: Well, true â€“ but freedom is worth fighting for. Not only were a lot of them given their freedom, but they were also given a pension, and land and so on.

Lloyd: What battles did the Rhode Island Regiment fight in?

Greg: Well, when the first Rhode Island â€“ and then later on in 1778, the second Rhode Island Regiment, they combined the two and just had one â€“ they fought in the battle of Red Bank, in New Jerseyâ€¦Valley Forge, and some of them even marched all the way here to the siege at Yorktown and the surrender of Cornwallis â€“ marched all the way from New York to here â€“Virginia â€“ to that siege at Yorktown, which is about 12 miles from Williamsburg, here.

Lloyd: When they combined the two units, was it still an all-black unit?

Greg:  By that time it wasn’t all black. You had a few what is known as “Mustee.” Mustee is another term, for example, like a mulatto â€“ a mix.  Mustee is half [West] Indian and half African American. So they did have a mixed, and later on, this one documentation described the unit as “the speckled troops.”  And that was part of the Continental Army, which was essentially part of the Rhode Island Regiment.

Lloyd: What ever happened to the Rhode Island Regiment? You don’t hear much about it.

Greg: Well, it’s a part of history thatâ€¦ historyâ€¦ that’s what makes history so beautiful and so wonderful. It’s history, but a lot of history is hard to find, but when you do find it, you run with it, and you use it to the ability that needs to seem fit. And what I mean is, what is history without [including] everyone who played a part in that history?  To make America how it became today on the road to become American... those individualsâ€¦ I believe that’s a lot of the reason why some African Americans are reluctant about history, because it is a part of history you very seldom hear about, including myself. Before I started here at Colonial Williamsburg, I never knew that there were African Americans holding muskets or in the war, except during the later part of the early part of the 20th century, and so forth, but I never knew that back in the 1700s â€“ middle or toward the late 1700s that there were African Americans in the war, and that one “hook” you can use to educate individuals, besides having the stereotype that when they hear about slaves the first thing that comes to mind is being whipped, the harsh slavery. It’s harsh anyway, please don’t get me wrong, but looking through young adults’ eyes, they need something to hold on to, to be proud of, and one of the “hooks” is free blacks (for not all blacks who came over here were slaves; a lot of folks believe that all blacks came over here as slaves) so you use as a hook [to get the interest of young people] blacks in the military.

Lloyd: Matter of fact, I hadn’t thought about it, but blacks in the military with muskets in 1770 or whenever, there was a law in Virginia before that that no black could own a weapon at all, of any kind, so it must have been the first time that blacks used muskets must have been in the army.

Greg: Well, that’s my point, what I was sayingâ€¦during the revolutionary era, when Governor Dunmore issued a proclamation right here in Williamsburg, he was trying to raise arms to control Virginia â€“ that was part of the king controlling the colonies. The more Africans you bring over, the better controlâ€¦.and money, of course, the economy, they were making money also. When the Americans saw this, especially in early 1776 and 1777, then some of the leaders here in Virginia and other areas had to swallow their pride because they saw that this was happening, that the British were raising arms, and bodies, and men, and women, so they had to think of another way to bear their arms, so that is when they started accepting [black] men only in the Continental Army to raise their arms. In return not only did they give them freedom, but they also gave them a pension, and a hundred acres of land. There’s one particular man named Cuff Green, he was given 100 acres of land for his services. Another instance â€“ Jack, Jack Chaplin â€“ he was given $3.50 in 1818, $3.50 per month as a pension.

Lloyd: I wonder what that would be now, but I’m not good enough at math to figure it out. (Laughs) You guess that would be enough?

Greg:  (Laughs) Well, if you look back at it (it certainly wouldn’t be enough now the way the price of gas is). But if you look at it, you can look at it this way, in the 1700s, a lot of individuals, depending upon what craft or trade they had, made four to maybe six shilling a day. Now, half of a shilling is about six pence. Well, six pence or seven pence, you can buy some eggs, a chicken. As a matter of fact, for a half a pence, or excuse me, for half a shilling you can even purchase a night’s stay at the Raleigh Tavern in the public lodging. Of course, private is negotiable. So that gives you an idea the money value vs. the $3.50 in 1818. I imagine you could buy a right many groceries.

Greg: Oh absolutely, even a renter’s fee for the month.

Greg: To my knowledge, yes they were. To my knowledge, according to the documentation we have, Library of Congress and other resources that we have gotten this from, many of them were freed, but many of them died, unfortunately. That one particular man that I spoke about that marched all the way from New York to the siege here in Yorktown, took part in the battle of Red bank, Valley Forge, and other battles on their way down here to Virginia to Yorktown, and marched back in the late fall, early winter, and when they walked back, this one particular gentleman lost all of his toes on his right foot and his joint in his left foot was badly bruised. And he did not last long at all after the war. He passed on. So, a lot of them passed on. Most of them were inoculated for small pox, and many of them went back to their home in Rhode Island, Connecticut, and went back to Massachusetts.

Lloyd: On a personal level, do you enjoy interpreting?

Greg: Oh, I enjoy it to the utmost!

Greg: (Laughs) I enjoy it to the utmost. I enjoy it so much, because historyâ€¦to be honest with you in school, history was not one of my favorite subjects, it simply was not. Why? Well, because there were so many dates to remember, and it was not taught to me well, I’m going to be honest with you, so as I learned the history for my whole time being here â€“ which is over 18 years â€“ I learned to simplify the history so I can teach it and apply it in an elementary way to even the smallest child, but not to insult the older one’s intelligence, do you understand what I am saying?

Greg: So, if it was taught to me a little better then maybe I would have understood it more at a younger age. I enjoy people in general â€“ all kinds and types of people. Of course, sometimes you have those individuals whoâ€¦well, you know, have their way, but I know how to deal with them as well.

Greg: I use it as an education tool. Because I am here, and we here at the foundation are here to educate our guests, regardless of where they come from, who they are, and so for.