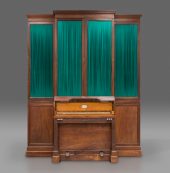 John Watson: We’ve just finished installing the organized piano as it was called in the 18th century, here back in Williamsburg for the first time since the instrument was new in 1799. I heard about the instrument when I first arrived in my position here in Williamsburg in 1988 and was determined to find it sooner or later; and I heard of an organized piano in Richmond looking for a home and I knew instantly this was the instrument. That was in 2012 and within a couple of months we had it hear in our collection.

Organized pianos were actually quite popular at the end of the 1700s and early 1800s. This instrument was relatively early in that period of its greatest popularity, made in 1799. Most organized pianos were square pianos, were actually rectangular in shape, and they lend themselves to the addition of a couple ranks of organ pipes underneath the piano. This is the only surviving example of an upright grand piano that was also organized, and because of that configuration, it was possible to have a great deal more room for pipes. And so the overall instrument standing nearly nine feet tall and almost seven feet wide has room for 256 pipes and a five-octave grand piano all under one roof.

The instrument was made in London. The first owner was St. George Tucker and his family here in Williamsburg. It was here only a fairly short time. His daughter married in 1802 and moved away. We think the instrument did not go with her and instead it went to Shirley Plantation, where it was owned by Charles Carter there for a few years, showed up in an inventory, and then it moved on to Albemarle County to a house called Castle Hill and it was there in the possession of the Reeves family and the Walker family. It was there until 1947.

This effort was the work of a whole team of people. My colleagues here in the Conservation Department all pitched in. We had some fantastic research help from a graduate intern; a couple of real experts that came in and helped us a great deal with the organ aspects. The piano was much assisted by some piano experts. Most importantly, the conservation of it was funded by a donor, a generous donor, who is actually a member of the original family that owned the instrument—a member of the Tucker family. The cost of the conservation was underwritten by them in memory of one of the other descendants of the Tucker family.