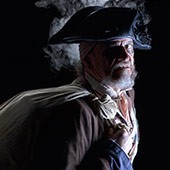 Colonial Williamsburg is embarking on its first-ever Halloween experience. The infamous pirate, Blackbeard, has returned to seek revenge after members of his crew were tried and executed in Williamsburg.

Rachel West: Welcome to the Past and Present Podcast. I’m Rachel West. To kick off our brand new podcast season, we’re going to talk a bit about one of my favorite holidays -- Halloween. Colonial Williamsburg is taking advantage of its own spooky history with an event never before seen on Duke of Gloucester Street. This year, we are hosting our first ever Halloween event complete with trick or treating and fun activities for the kids…but come nightfall, the Revolutionary City will transform into a place not for the faint of heart. In 1719, Governor Alexander Spotswood ordered the capture of Blackbeard. Lt. Robert Maynard was able to catch up to Blackbeard and his crew off the coast of the Outer Banks, and a bloody battle ensued. Blackbeard was ultimately killed, his head cut off and his body thrown overboard. Legend says his headless body swam three times around the ship, all while his head demanded to continue the fight. The remaining members of his crew were captured and brought back to Williamsburg to stand trial. They were then hung from the gallows right here in the Colonial Capital. Blackbeard’s first mate, Israel Hands, testified against the rest of the crew and was able to live. But not for long…he died destitute in England.

Blackbeard: And it serves him right. He turned against his crew.

Rachel: We have Blackbeard this Pirate here! Hello, sir! How are you?

Blackbeard: Much better than what the reports say.

Rachel: How did you get into the life of being a pirate?

Blackbeard: I started as a privateer. Some would call us legalized pirates. I was under Captain Benjamin Hornigold. We had a writ from the Queen, we could take what we wanted from the Spanish...from the French, as long as we shared the spoils with the Crown.

Rachel: Now there are reports of you lighting fireworks off in your beard.

Blackbeard: (Laughter) Not fireworks per se, but slow match, cannon fuse twisted long down into my beard and in my hair, and with the slow smoke as it burned would cloud my face and capture under the great hat I choose to wear.

Rachel: Whenever a crew member misbehaved, what did you do?

Blackbeard: We have many punishments we can administer, from a simple flogging to abandoning them on some God-forsaken rock, if you will. Or, we could keelhaul them, where we tie their arms and legs with ropes and drag them underneath of the ship from one side to the other. Not many would survive such a punishment.

Rachel: What happened with Lieutenant Maynard?

Blackbeard: (Groans) Maynard. A dandy little man wanting to make a name for himself. (Sighs) He caught up with us off of Okracoke. It was November 22, 1718. The beginning of the battle is entirely unimportant, but when our ships were made fast and he and I came face to face, he drew that small sword of his, that gentleman sailors wished to carry, an officer’s sword. (Laughs) So I drew forth my cutlass and we met. My trusty cutlass snapped that small sword of his at the hilt. The look on his face of surprise and terror...he jumped backwards, throwing that useless hilt to the ground, grabbed a pistol and brought it to bear, now seeing that the challenge had changed.

I drew forth one of the six pistols that I carry as a brace down my chest and stood to receive his shot. He pulled the trigger and the ball did strike me in the chest. I merely took one step back, laughing as I brought my pistol to bear. And as I pulled the trigger, well, luck was on his side not mine. My pistol, it misfired. And as I re-cocked the piece, one of his marines come up and that’s...well he cut my throat to put it plain. But it never stopped my laughter as I fell to the deck.

That’s when Maynard decided to have my head removed, but as you can see it is where it belongs. And Maynard, he took full credit. That marine, he got none of the reward. So Maynard, I’m looking for you, too.

Rachel: What are your plans for Williamsburg upon your return?

Blackbeard: To gather my crew back, to bring them from their graves, to find that turncoat Israel, and to let Alexander Spotswood know I’ve returned and I will have revenge.

Rachel: Are there any other crew members you’re looking for?

Blackbeard: Aye, Caesar. A former slave. Whenever we captured a ship that had slaves, we offered them to be equal members of the crew. They could stay with us and be free and equal or they could continue on their lives in chains. And Caesar was entrusted with one task. If it looked that we were to lose, he was to ignite the magazine of the ship and blow it from the waters. I want to confront him and find out why he did not, for had he done that, it would have taken Maynard and his men with us. Yet, they walk this earth breathing and we don’t. So Caesar has to explain to me why he did not follow the direct orders of his Captain.

Rachel: After you find Israel and Caesar and Alexander Spotswood, what will you do then?

Blackbeard: Well, once I’ve dealt with them, my other crew members, the ones that were loyal like John Gills, well I figure, it’s my understanding, if you will, there are many taverns in this town and they’re quite well-stocked with rum and other spirits. So I think, well, what pirate would not be thirsty after getting revenge? So perhaps to see if we can empty some of the barrels of rum or ale that are in these taverns in Williamsburg, and maybe find someone to join us. (Laughs)

Rachel: Okay, Mr. Teach, thank you for your time today, we’ll be seeing you out on DoG Street...

Blackbeard: Yes you will.

Rachel: Alright, some notes to share with you on our Halloween fun. We have two events geared toward two different age groups. A Pirate’s Life for Me is for anyone looking to have fun this Halloween and will include a costume contest as well as games for the kids.

After 8 p.m., however, the streets darken and Blackbeard returns. Anyone ages 13 and up will be able to go inside the Gaol or meet the gravedigger who dug the graves of Blackbeard’s crew.

For more information and to purchase tickets, visit colonialwilliamsburg.com/haunting. Blackbeard is looking forward to seeing you.