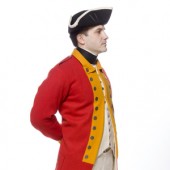 The thrilling RevQuest: Save The Revolution™ series opens its fifth season with a new spy plot: The King’s Advance. Dive headfirst into Revolutionary history as you join the service of secret intelligence gatherers. Gather clues, crack codes, meet with covert agents, and text your secrets to receive instructions.

Harmony Hunter: Hi! Welcome to the podcast, I’m Harmony Hunter. Today the Director of the Digital History Center, Lisa Fischer, joins us again to talk about the ongoing program RevQuest: Save the Revolution. We’ve actually talked about this on the show once a year over the past four years as this sort of serial program has evolved.

If you’re not familiar with the program, it is a really fantastic idea that immerses people in some intrigue of the Revolution. Tell us a little bit about RevQuest’s origins the goal of the game and this really fresh perspective you give with an immersive experience.

Lisa Fischer: RevQuest: Save the Revolution series is our online, onsite, online alternate reality game series. We just launched our fifth one in March called RevQuest: The King’s Advance. The idea behind the games is we want our guests to take an active role not only online before they arrive, but once they arrive onsite.

They are tasked with being spies during The American Revolution. They even have to meet with people when they come here. They’re looking for hidden clues, deciphering messages and as they go along, texting in information with their secret correspondent. And if they successfully solve the mystery, then they get to meet with somebody at the end and receive a token of appreciation.

But all of the games are based on actual events and real people, so it’s also a way about learning about things that happened during The Revolution, and the importance of spying and espionage.

Harmony: It is brilliant. And I’m so excited to see this program continuing and thriving every year as you come up with new plots. Because it takes history from something passive to something active. That is huge! You’re not just walking past a building, you’re not just hearing an interpreter give you a talk about what happened here, you’re part of it. These are real plots. I think that’s what’s so fun about it that you see something’s at stake, but you’re able to relate to an actual historical event by putting yourself in it.

There’s nothing more exciting that’s happened recently in Historic Area for me. And you can see folks in the Historic Area tearing around from place to place, checking their clues, checking their codebooks. Tell us a little bit about the plot that you’ve chosen and how you tried to decide what sort of events and historical themes you want to explore with folks.

Lisa: Yeah, it’s always fun when we sit down to create a new game to have to think about well, "What could we use this year?" That’s sort of the challenge, but it’s also a lot of fun as we go through different events and think about what could actually be a game and be sort of a spy mystery.

So this year’s game, RevQuest: The King’s Advance, is set in 1781, and is actually about the contest for Virginia. So we’re actually bringing it very much local and asking our questers to help us save The Commonwealth. So it’s obviously a very important piece for both sides during The Revolution. There were a lot of supplies in this area, so if the British had captured Virginia, then there would have been, the Revolution may have turned out differently. So this year’s game, the questers learn that General Phillips has been in Virginia for quite a while. It’s the spring of 1781, and Cornwallis is coming up from the south.

Harmony: These are both key British generals.

Lisa:  Exactly! Yes! So suddenly we have two big British forces that are going to be converging on Virginia and so we need to know what we’re up against. You begin when you arrive on site with a video introduction. This year, you meet with Thomas Jefferson and the Marquis de Lafayette, who are the ones who actually task you. Jefferson governed Virginia at the time, so he obviously really needs your help to save the state.

We need to know more about what this combined British force is going to be so that Lafayette do his best to prepare to defend. That’s where the questers come in: we need their help to figure out that information.

Harmony: So as you’re choosing these plots year after year, are you trying to choose angles that will maybe surprise people by what they learn, by who the heroes are, who they think the heroes are. What are some of the other more subtle messages you’re trying to pass to people as they play this game?

Lisa: Well we want them to become more familiar with some of the choices that people were making during The Revolution, that it wasn’t necessarily an easy cut and dried, patriot or loyalist, that there were a lot of sort of nuances and different things going on that people were having to make their own personal choices about in terms of what their actions were going to be, what their beliefs were.

So obviously, if you have a war going on around you that affects so much of your life. So we’re trying to get people to think a little bit about what that would have been like. But at the same time it’s meant to be a fun experience. So it’s great for us to be able to watch questers playing or partaking in the mission, we’ll watch them as they’re trying to figure out clues as they’re finding different secret hiding places around the Historic Area, and meeting with the people.

I think that’s the biggest sort of fun part of the game is the actual interactions with our staff who help them along the way and will reveal information. So I think that’s something that is unique among all games in museums out there. We’re one of the few if not the only one that really has that personal interaction.

Harmony: Well I know what I’m most excited about with RevQuest, but as part of the team that’s created it, what is the part of its success that pleases you most? What are you most proud of as you look at the fifth year of the series?

Lisa:  I think it’s the fact that we’re seeing more and more people each game. We have more people playing. Last year was our biggest RevQuest: The Old Enemy, that was our biggest game to date. And then this year we’re hoping to surpass that one. So it’s just seeing the number of people who are playing, the enjoyment that they seem to get from it, and that we’re also seeing people coming back to play subsequent games. I think that’s something that is great that people are wanting to come back to actually play again and see what the next one’s all about.

Harmony: And you’re learning about history. You’re interacting with these costumed agents and secreting them out. You’re also getting to look at some more of the buildings in the Historic Area, you’re weaving in some of these wonderful, original, and reconstructed buildings and sites and make those part of the plot. What are you looking for when you sort of choose a site for some of these different scenes to play out?

Lisa: Well, we’re trying to find things that maybe, places that are a little bit more off the beaten path, places that our guests may not normally go, that are a little more hidden. That actually works really, really well with being a spy mystery, because obviously most people probably wouldn’t have left their secret messages out in plain sight. Unless it was of course encoded, and then only the right people could read it.

We also want to make sure we’re creating something that sort of gives our guests a chance to explore the town as they play the game. So it’s in some ways, a kind of itinerary so that you’re sort of moving from one end of the town to the other. Obviously we don’t to make our guests do any more walking than necessary so are very conscious in choosing clues as kind of a progression. But at the same time give people an opportunity to really see the entire breadth of the Historic Area.

So it’s a lot of fun to sort of have to go out and look at the Historic Area in a new way when we’re planning the game because of course we’re so used to seeing it. We go out there and try to have a fresh perspective and look for places that we might even be thinking about for where could we hide clues, and again, post things that will help to facilitate the game.

We also like to make sure we’re bringing in key sites, too, things that we want our guests to see. We really encourage people to play, but they don’t have to play straight through so that they should stop and see other things that are around. In fact, it can be part of their cover, because if they are being followed, it can look like they’re going about their daily business. Then they would be less suspicious. In fact, they should stop and see a trade site or two along the way, or visit a tavern. It’s a lot of fun to kind of have to think about, think about things in a new way.

Lisa: They can go to the ColonialWilliamsburg.com website, search on RevQuest, and that will pull up information on how to play when they arrive. There also is a link to an online mission, you don’t have to do that before you arrive, but we’d love it if you did. That actually starts the game.

It’s just a little bit before the onsite mission. Then the website will give you information about what to do once you get here. You can pick up your materials at any ticketing site, so the Visitors Center or the Pitt Store are goods ones because they are also showing the video.

Harmony: At no extra cost!

Lisa: At no extra cost. Yes, RevQuest:The King’s Advance is included with any Colonial Williamsburg admission ticket except the sampler ticket. So if you have any ticket, you can play. Once you pick up your materials, you see the video, and then your first thing, you begin texting and it will tell you where to meet your first secret agent. There’s a schedule of the times for those that’s in the packet. During the summer it’s essentially every half hour, during the sort of regular day.

Harmony: Well it’s so great to see you, and it’s so great to be able to see this team of minds creating plot after plot. To really take something that’s already exciting -- spying and intrigues and plots -- and really take people and put them smack in the center of it. Lisa, thank you so much for being our guest today and hope that all our visitors take a chance to play RevQuest while they’re here. Thank you!