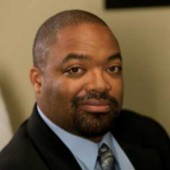 African American history is weighted with tragedy, but bringing the fullness of life to the stories of enslaved individuals is the mission of the African American History Program under the direction of Stephen Seals.

Harmony Hunter: Hi, welcome to the podcast, I’m Harmony Hunter. Today we’re welcoming Stephen Seals, Manager of Program Development for African American and Religion Interpretation, and he actually is newly appointed to this position. Stephen, thank you for being here with us today.

Stephen Seals: Good to be here!

Harmony: I’ve called you the new director, how new is your appointment?

Stephen: I started August of last year, so a little over a year now.

Harmony: But you go way back with Colonial Williamsburg and interpretive programs.

Harmony: What kind of scholarship goes into this position that you’re in, sort of helping to formulate the direction of programs for African American and religious interpretation?

Stephen: Well, It starts with, it starts with the vision. We’ve been doing African American programming here at The Foundation for over 30 years. There’s already a foundation set up for African American programming. When you come into the position, you’re not trying to reinvent the wheel as much as you’re looking at the programming that’s already being done. You look at what’s not being done and you look at where you think things can be tweaked, and what kind of we need to talk about.

There are certain stories that, when a guest comes, they’ll think of when they think of slavery, there are words they’ll think of, there are things they’ll associate with it. Those are the easy things as far as when you’re trying to get those things conveyed to a guest.

But there are so many other facets of the life of blacks in the 18th century that we want to convey. We have to look at the programs. What stories are we telling? On top of that, what stories do we want to tell? Even more on top of that, what stories do we need to tell? It’s very important for guests, for everyone to understand just how varied the lives of the enslaved and the free blacks of the Americas was. People were enslaved but they weren’t. That wasn’t what defined them.

Harmony: That was such an eye-opener to me. As we prepared to do this interview, I realized that unwittingly I was holding an assumption as we talked about the discussion that we wanted to have here together.

Harmony: My thought was this is a very negative story. This is a very sad story. This is people kidnapped, oppressed, enslaved away from their families. I thought, “How do we share such a negative narrative? What do we bring out of that for people?” And that was your point! That they are more than slavery.

Stephen: Very much so.

Harmony: They are individuals with as rich a life as anyone's.

Stephen: Very much so. It’s very true in respects of everything that you said. It is a very dark time in the history of this country, of the world. What our ancestors went through was horrible, was terrible, but if there’s one thing that I truly believe about the African in America in the 17th and 18th centuries, is that the one thing that made them survive so that I’m here today was hope. You have to have hope. If you don’t have hope, then why do you get up in the morning? Why do you continue to live? Why do you have children? Why do you get married? Why do you do those things? Because of hope. You do those things because you are going to survive, and they did survive.

As many stories as there are of oppression and of all of those things we know about and hear about with slavery, the thing that we really need to share with guests, that they need to understand, is that these enslaved members of society were people. They were mothers. They were fathers. They were children. They were lovers. They had just as much of a varied way of being, and being with each other and with society, as the whites, as anyone. As the Spaniards, the French. They had a culture. They had a life. They had hope. They had victories. Even though they had defeats, defeats greater than many other people have had to deal with, they had victories. They had things to look forward to. They had family, and they had friends. And I just want to make sure that in our programming, we tell that side of the story, too, because it’s important.

Harmony: As you’re looking at programs and thinking about characters to highlight -- I say characters, they are individuals from the historic record whose stories you want to bring to light -- how are you hoping to get out of that rut of this narrative that we have in our minds, some of us, of this being a very negative history? How are you trying to bring out those stories of hope, of resilience, of connection?

Stephen: Well, I’ll give you an example. We have an amazing program that we’ve been doing for the past year called, “A Gathering of Hair.” It’s about three African American women. Two are enslaved, one is not. The story is about them getting ready to go to a gathering. In that piece, the word, or even the institution of slavery, is mentioned all of three times. Because what the program is truly about, it’s about how these people, underneath the umbrella that they are in, which is slavery, or the plight of the free black in the 18th-century Virginia.

It’s a hard subject to talk about, despite the fact that it’s their history as much as it is our history. It’s not something to look down upon. These people survived. They people survived with all of these odds put on top of them, and that to me is a triumph, that’s something that needs to be celebrated. It needs to be talked about, and it needs to be explored. It’s something that every guest that comes here, black or white, needs to take home and talk about and realize this is their history. We can all be a part of talking about this history and moving forward with this history, and making sure this history makes the history of America even richer.

Harmony: Right, because this is not just African American history, of course. It’s the history of all of America and the building of the nation where we live today. When guests come see these programs, what are their responses? What are their reactions that you’re seeing?

Stephen: Overwhelmingly, "wow!" Overwhelmingly they talk about especially the positives of “Wow! These were people! These were people!” For so long, they were words in a textbook or history or people who didn’t have control of their lives. To realize that just because they didn’t have control under the law of who they were and what they were going to be, that they had control. They were their own people. The guests seem to really appreciate that. They appreciate those stories. They get the stories of what we all know of slavery, but to be able to see the rest of it too, they feel like they’ve gotten something even more than what they were expecting. That’s what always makes me smile.

Harmony: It’s amazing that something so obvious, but you really have managed to turn the narrative on its head and bring something out that’s unexpected. Another part of the African American experience is, of course, religion, another expression of their spirituality, of their inner strength. What are you doing with religion programs in the Historic Area?

Stephen: Ah! We are trying to do an expansion of religion programming just like African American programming. I think there’s been a feeling amongst a lot of the public that religion has almost become as taboo a subject as many of the other things that we don’t discuss openly anymore. The wonderful thing about living history is that we are allowed to tell the story that we don’t have to apologize for talking about religion because religion was in the fabric of 18th-century society. You can’t talk about the 18th century without talking about two subjects: slavery and religion. It was embedded within the fabric. We try to make sure that people understand that we’re not trying to tell them what to think about religion, we’re trying to show them where we came from because the only way you can know where you are and where you’re going is to first know where you’ve been.

Harmony: As we reflect on Black History in the month of February, what is your hope for how you can deepen or broaden our understanding of this history?

Stephen: I think that the one take away that I want people to have from seeing this Black History Month programming is that just how much the story of blacks in 18th-century America is attached to the greater history. People can come here and see programs that have blacks in it, that have whites in it, that speak on the question of
Africans in American in the 18th century. I want people to know coming away from these programs that this is a shared history, and that’s how we’re treating it. I think that’s truly how it should be.

We’re all Americans, you know? I’m not a black man who happens to be an American. I’m an American who happens to be black. In that, I have a responsibility to every other American who walks on the streets, to have this shared history, and to be able to help them to see those facets of history, and relive those ones they know, but also to explore the ones that they never would have thought of or that they want to experience. Hopefully they’re going to get a whole bunch of different experiences that help them see the richness of Americans.

Harmony: It’s a wonderful history and I hope people come here in February to hear these stories, and year round to hear these stories and how they’re interwoven into the genesis of the country we live in today. Stephen, thank you so much for being here today. It’s been a pleasure to have you.

Stephen: Thank you for having me. Thank you so much.