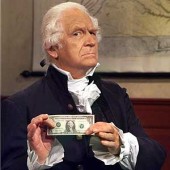 What was in George Washington’s wallet? Long before the establishment of a standard American currency, there was trade, barter and credit. How were these financial activities handled with the myriad coins and metals in circulation?

Harmony Hunter: Hi, welcome to the podcast, I’m Harmony Hunter. Well, today’s podcast comes from a listener question, and I’m always excited when we have a listener weigh in with a question. First, I want to say thanks to the listener, and even though it’s been a long time, we do appreciate your ideas. We will get to them to eventually! The question was, “How did Colonial people pay for things when there was no standard currency? What money was in George Washington’s wallet?” The expert we’ve brought with us here today is Erik Goldstein, who is our resident numismatist, our money expert. Erik, thank you for being back here with us today.

Erik Goldstein: Thank you for having me.

Harmony: Well we’re glad to have you back with us today. You’ve been a wonderful guest and weighed in on issues like this in the past. Before we unpack this question of what money George Washington would have paid for things with, what do we need to understand about currency then versus currency now in order to have a sort of framework for this question?

It’s a pretty complicated topic. I’d like to take a quote from Joe Lasser, who was a lifelong coin collector and the major numismatic benefactor of Colonial Williamsburg. It means he gave us his entire coin collection that was specifically built for a place like Colonial Williamsburg. To sum it up, Joe always loved to say, “It was a bullion world,” which means it truly was a worldwide economy even back in the 16th, 17th, and 18th centuries. It all had to do with a specific amount of good gold or good silver.

What it meant really is that it didn’t matter what shape the coin was, whose picture was on it, what nation struck it, as long as had an ounce of gold on it for a gold doubloon, or roughly an ounce of silver for a piece of eight or a silver dollar, then it was money the world wide, and that’s really what made things go.

In Colonial Virginia, it’s a little trickier because there’s a scarcity of hard money. There’s not too many gold and silver coins circulating. There is a little bit of paper money after 1755, and a lot more paper money in the beginning of the 1770s, but for most of the colonial period, it seems like early Virginians were pretty happy dealing with barter and credit.

Erik: It depends of how post-revolutionary you want to get. We need to think about money globally in the 18th century as far as trying to understand what coins were around because your average Virginian would have been just as happy with a coin made in Bolivia as he would have been a coin made in London. That being said, there isn’t going to be a heck of a lot of that. There’s going to be some locally made paper money, and there’s going to be a lot of credit and barter. It’s a very complicated way of doing business. Once we get into the 1790s with the establishment of the United States Mint, The United States Mint Act authored by Thomas Jefferson that gives us the dollar divided into one hundred cents, then we have the beginnings of the real standardized money system that we’re all used to now.

Harmony: This is so hard for me to get my head around because when I get change back now and there’s a foreign coin in there, it’s a novelty. If I was a Colonial Virginian, it would have been just a spendable as the nickels and quarters that were in my pocket because money was actual money, not representative of money.

Harmony: Gold was gold. If you had a gold coin, it was pure gold.

Erik: It wasn’t necessarily pure gold, but say a doubloon, a $16 gold coin, had $16 worth of gold in it. As opposed to a dollar coin now, which has a fraction of a cent worth of brass in it.

Harmony: So to talk a little bit more about this subject, making change might mean clipping one of these coins?

Erik: Not necessarily clipping but cutting it in half. So if you had a silver dollar coin, say you had a 1755 Mexican silver dollar, a nice round beautiful coin with pillars and the old and new world represented on the obverse, and I was buying something from you for a half a dollar, and you didn’t have a half a dollar to give me in change? We could just take out a chisel and cut the coin right in half.

Erik: Counterfeiting problems are as old as coins themselves. Coins in western society really originate about 700 B.C., and almost immediately they were counterfeited. It’s an age-old problem, it’s a human vice that I don’t think we’re ever really going to get rid of.

Harmony: So when we talk about coins being scarce, and you’ve alluded to the fact that barter and credit were some of the primary means of, you know, running the economy in Williamsburg, what did we see being bartered? How did that system work?

Erik: Very often it was country pay. If I have a whole bunch of eggs from my chickens, and you have some bread that you’ve baked, and you need some eggs, and I need some bread, let’s work out a deal. That’s a lot of what happened in places like the market house in Williamsburg.

Harmony: And then, in a credit society, how would things have eventually been paid for?

Erik: It could be very long and complicated. If I was a tobacco farmer, I would harvest my tobacco crops. I would dry it. I’d warehouse it, and I would essentially have a credit on the books, which could be sort of redeemed in tobacco notes, which could then serve as “sort of” currency. We’re getting into some pretty complicated area, but goods produced by individuals in the area could be easily transferred into credit on the books that could have been spent with anybody else within the same system in the area.

Erik: I would imagine Washington would have had a fair amount of specie on hand. There are accounts of him purchasing rather expensive consumer goods from local people and places, like Philadelphia, and paying for them not in money of account, or credit, but paying for them in things like Spanish milled dollars. So he had money on hand. He certainly did in the form of gold and silver coins. He certainly had a huge credit on the books with his factors in London because he was constantly ordering goods from them, and he wasn’t shipping across a big bag of silver or gold coins every time he ordered something from his factor over there.

Harmony: What kind of coins would have been in circulation commonly in Williamsburg?

Erik: We know from archeological digs that after 1773, there’s no doubt Williamsburg had the entire pile of the Tower Mint 1773 issue of Virginia Half Pennies. Those were really common. We think they have disappeared during the Revolution, then they reappeared after the Revolution and stayed in circulation until the Civil War. There’s no doubt the most common coin in Revolutionary era Williamsburg, that was made out of a precious metal or specie, would have been the Spanish Pistareen coin.

Erik: Another point I’d like to make is that we’ve just entered this capital campaign. The coin collection is going to be one of the big winners. Once we have the funds raised, and we expand the museums of Colonial Williamsburg, there’s going to be a dedicated numismatic gallery named after Joe and Ruth Lasser. So once that happens, there will always be coins and paper money and metals on exhibit at Williamsburg.

Harmony: That’s wonderful, and until that time, there’s an excellent virtual exhibit online at History.org called “Coins and Currency,” which we’ll post a link to with this podcast. We hope everybody gets to see that exhibit, very rich in information and images. So Erik, thank you so much for being here today, and answering the burning question of “What was in George Washington’s wallet?” Thank you for being here today.

Erik: Thank you very much for having me.