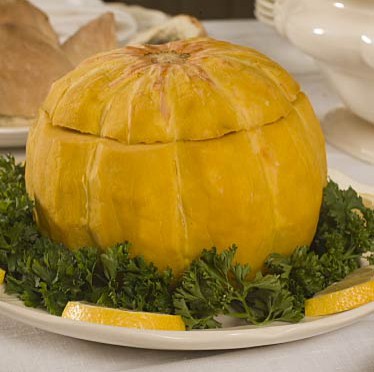 Gain a new respect for the good old pumpkin. Author Mary Miley Theobald traces the history of the venerable gourd.

Harmony Hunter: Hi, welcome to the podcast, I'm Harmony Hunter. Joining me today is Mary Miley Theobald, an author who has had to transform herself into something of an expert on pumpkins in the course of writing an article for the Colonial Williamsburg journal. Mary, thanks for being with us today.

Mary Miley Theobald: Well you're welcome, thanks for asking.

Harmony: I think tables across America, including my own, this Thursday will have a pumpkin pie on them, so I think it's a good time for us to talk about pumpkins as part of American history â€“ played kind of a larger role than most people would think.

Mary: The most interesting thing I found out about how pumpkins came to American tables would be how long pumpkins had been on American tables. We can go back at least five or six thousand years to Native American archaeological sites in the Southwest and find pumpkin seeds that were consumed by the people of that era.

Initially, it was only the seeds that were consumed because the pumpkin flesh was too bitter to eat. After they were cultivated successfully, the Indians started eating not just the pumpkin flesh, but the leaves and the flowers and the seeds, of course. So they've been around forever.

Now, they haven't been around European tables forever, because Europeans didn't discover pumpkins until the 1500s, or really Columbus in the 1490s. Pumpkins are part of what historians call the "Columbian Exchange."

Harmony: This is an ancient North American crop, something that Native peoples are consuming every part of here. How are Native Americans preparing and preserving pumpkins?

Mary: Well interestingly, some of the early European explorers and settlers wrote about that. They were fascinated with the pumpkin. They described how Indian women prepared pumpkins. They may have boiled it and roasted it, but they also dried them and made sort of a vegetarian jerky. But they would cut them in long slices and dry them in the sun or by the fire in one of their rooms, and they kept for years. You'd boil them before you ate them, but still.

It sounds really easy to do, but when George Washington directed his farm manager to try that with some of his pumpkins that he wanted to preserve to feed to animals, to livestock, the man reported that he tried the drying, but it didn't work. I suspect they just got moldy. I don’t know what the secret was. The Indians could do it, but it wasn't so easy for George Washington.

Harmony: Then when European colonists come to North America, they encounter the pumpkin. We think of corn as being such an important crop to them, but you actually found a quote that suggested that the Massachusetts Bay colony is eating pumpkins â€“ what was that quote, almost morning noon, and night?

Mary: Yes, it was a poem, and it's kind of funny. You wonder if it wasn't a song. I'm not sure, It was a poem that dated from the 1630s, and I can read a little bit of it, but what it says basically is that if it weren't for pumpkins, they would probably have starved. What the writer of the poem, who is anonymous, says is:

Stead of pottage and puddings and custards and pies

Our pumpkins and parsnips are common supplies,

If it were not for pumpkins we should be undoon.

Harmony: It sounds almost like they're sick of them.

Mary: They may be, may well be. But they were very much a part of the diet of the colonial Europeans, but not, interestingly, back in Europe. In Europe, they just didn't cotton on to the pumpkin at all. They were interested in it, because it was a new plant, so some botanists grew pumpkins for curiosity's sake, but really early on it got a reputation for being a poor man's food, so was corn. Corn got a reputation for being animal food. People didn't eat it, but it was livestock food, or a really poor person's food.

So you find poor people growing pumpkins near their dunghills, because they soil is so fertile, of course they grew very well there. But in cookbooks it doesn't show up very often. One cookbook that mentions it is Martha Bradley, who wrote The British Housewife in 1770 and she calls the pumpkin "A very ordinary fruit, principally the food of the poor." So you can sort of sense a, "this really isn't for us, it's for them."

Harmony: You've touched on how Native Americans prepared pumpkin, what did the European colonists, the settlers, do with pumpkins differently?

Mary: Well the English women have a tendency to make a pie out of just about anything, and they quickly figured out how to make pumpkin pie. They didn't call it pumpkin pie, but the first American cookbook, which was published in 1796, that would have been 20 years after the start of the Revolution, offered two recipes. They were for pumpkin pudding, but when you read them, one of them was made with a paste, which they meant pastry, or crust. One of them without, and that was more of a custard.

They stewed the pumpkins, and then they cooked them with cream, eggs, sugar, mace, nutmeg and ginger, and baked it all three quarters of an hour in a crust. If you look on the Libby pumpkin can, that's pretty much the recipe, with a few more details, but it hasn't changed much. So I suspect that when we eat a pumpkin pie at dinner on Thanksgiving, it's pretty much the same pumpkin pie that they were eating 200, 300 years ago in the English colonies.

Housewives could slice them up, cut them up and put them in a pot and stew them. They could bake them with apples and add butter and vinegar and ginger and spices and make it like an apple pumpkin tart. They added them to soups and stews. A French cookbook uses pumpkins telling how to make many kinds of pumpkin soup with cream and butter and nutmeg. A lot of times the simplest thing the women could do was cut them in half, scoop out the seeds, put them back together again and roast them and serve them with butter. That was probably the most common, because it was the easiest.

Harmony: It's so interesting to find that something that sustained the colonies in the early days â€“ and the Native Americans before that â€“ is such a rarity now. It's been downgraded to just decoration that you could eat if you had to.

Mary: The pumpkin is more decoration now than food. But you can still find in the grocery stores some small gourds and pumpkins and of course they're all related that look more like the pumpkins did in early times, back hundreds of years, thousands of years. We think of pumpkins as being orange, but pumpkins were almost every color. They were yellow and green and blue and red and tan and white, and most interestingly, some of them were multicolored and really beautiful. You can see some of these in the grocery store today.

Harmony: We know that Thomas Jefferson grew them, George Washington grew them. They were eating them, but they were also drinking them.

Mary: Yes, they grew them to eat themselves, they grew them for their livestock, and with typical American ingenuity, they figured out how to make an alcoholic beverage out of pumpkin. We think the Pilgrims probably did this first. In fact, that same poem I quoted you earlier has a stanza that mentions drinking pumpkins. They say, the author says:

If Barley be wanting to make into Malt,

We must be contented and think it no Fault,

For we can make liquor to sweeten our Lips

Of Pumpkins and Parsnips and Walnut-Tree Chips.

So they were making a liquor of pumpkins, probably with persimmons and hops, maple syrup, and it was probably more a beer. Later on and further south in Virginia, one of the larger planters in the area, Landon Carter mentions pumpkins in his diary. He also figured out how to concoct some sort of alcoholic beverage. He doesn't give a recipe, but he called it "pumperkin," which I think is a marvelous word, but it didn't catch on. I've never seen it anywhere else but his diary. Maybe it exists, but I don't know. We don't know his recipe.

We do know there were some other anonymous recipes from the 1770s that talk about how to get the juice of the pumpkin, boil it in copper, and let it be hopped culled fermented & casked as malt beer." Which they mean, like you would make beer. So I think pumperkin was probably a beer.

Harmony: What part does pumpkin play in the larger American story?

Mary: I think it was more important than we realize, because today it's not an important food. It's a nice food and we have it on holidays, but it isn't important. It was very important from what we gather from written documents is that it may well have sustained the population through a long winter, at least in the early years, the early 1600s â€“ not by the 1700s. There just wasn't much food in the winter, and being able to have preserved pumpkin could well have kept people alive that wouldn't otherwise have. So I think it was a far, far more important food.

I think colonists and Indians alike would be appalled today at the way we waste pumpkin. We waste it on Halloween by carving it up into jack-o-lanterns, and we smash pumpkins in the street. Pumpkins got more respect in the colonial era than they get today. Thank it for sustaining our ancestors during those hard, early winters.

Harmony: If you’d like to read Mary’s article, you can find it online at history.org/journal. Mary, thanks for coming.

Mary: I appreciate being asked, and good eating.

in Food and Drink, Research and Publications, Trades & Technology | 2 comments