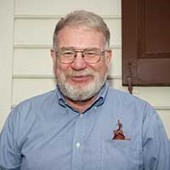 Intelligence born of practice combines with the study of science to complete the historic tradesman’s store of knowledge. There was no better spokesman for the Historic Trades program than Director Jay Gaynor. Jay recently passed away and we miss him. This encore podcast is dedicated to him.

Learn more: Why Do We Cast Cannons, Make Wooden Wheels, and Build Coffeehouses?

Our guest Jay Gaynor is Colonial Williamsburg’s Director of Historic Trades, where he oversees the rediscovery of the skills of America’s founding century.

Jay, thank you for being here.

Harmony: You are Director of Historic Trades. For folks who might not have visited Colonial Williamsburg to come out here and see what we do, can you talk a little bit about the historic trades program: what it is, and what you try to do with it?

Jay: Well it’s been around for a long time. It actually got started in the 1930s, when there was a real emphasis on doing handwork, sort of in the face of industry and growing industry and a realization that preserving that handwork was preserving some really important skills and processes and ways of thinking, just making sure people had some manual dexterity to understand how things worked.

We can actually replicate, to a small extent, an 18th-century economic situation. As far as I know, we’re the only folks around that can literally build a house from the ground up, and all for intents and purposes, pretty much furnish it. We may bring in a few things, which would have been the things they would have imported in the 18th century, but it’s something we’re really proud of.

Harmony: I want to get back to this thought that you brought up about Colonial Williamsburg’s Historic Trades program being a working economy. Can we talk about the interconnectedness of some of these trades? How one trade feeds another, or how four or five trades might work together to make one product?

Jay: If I can back up even a little bit more from that, I think one thing we all have to realize is that so much of Colonial America's economy -- and especially in a place like Virginia where we depended upon the exportation of the cash crop -- was dependent upon what the English economy was at that time.

So while our blacksmiths here in the 18th century may have spent most of their time repairing ironwork, repairing tools, making little special bits and pieces, we really take on what would have been the equivalent of 30 or 40 trades in England at the time.

It’s everything from doing building hardware to making tools for other shops to use, nails that we use in the houses that we make, the hardware that we put on the carriages that the wheelwrights produce, bits and pieces for the foundry. The blacksmiths here in town really are, to a large extent, toolmakers to the whole trades department.

A lot of what we do are interrelated projects like that. Building a building is a good example, where the brickmakers do the bricks and the foundation work. The carpenters do the woodwork. The blacksmiths do the hardware. If we’re going to furnish it, the cabinetmakers do the furniture. The textile folks do bed hangings, and the list could go on and on.

Harmony: We have an Electronic Field Trip premiering this Thursday, January 13th called “The Amazing Trade Shop Science Race.” That’s a program that’s developed for school children, but its focus is a lot of what you’ve said about the interrelatedness of many trades coming together to build Charlton’s Coffeehouse, and also the sciences behind some of those trades.

Jay: Well again, I sort of have to start with the 18th century. They knew that if they hit something in a certain way, something would happen. They knew if they heated it to a given temperature and cooled it quickly that it would get hard. They knew that they could pull silver wire into thin, thin pieces but they had to stop occasionally and anneal it so it wouldn’t break. They knew things about dyeing and all kinds of processes that we today think of as being very chemical or physical. Very scientific things that are very engineered.

But they really didn’t have an understanding of why things took place like we do today. A silversmith didn’t really know anything about the molecular structure of silver, and he really could have cared less about it as long as what he did, worked.

In the period we’re talking about, that was beginning to change. What we think of as pure science was starting to evolve. They’re beginning to understand things like chemical relationships and Newton’s work in physics, and all sorts of things that actually took fairly abstract knowledge :sort of a theoretical understanding of things :and were, for the first time, being applied to hands-on manufacturing and production.

So today we have to sort of look at it in a retrospective way. You walk into the blacksmith’s shop and you see heat treating going on, or you see solids being moved almost as if they’re plastics. You go into a kitchen, you see all kinds of chemical reactions taking place. You see wood being processed, and it being done in such a way that when it shrinks, it’s the size you want it to be. The list could go on and on. Today, from our 21st-century perspective, that’s the way we look at things.

We actually look at those cooking things as chemical reactions. We look at the heat-treating again, as a molecular action that’s going on. So we’re doing it in sort of a retrospective way. That kind of gives us an opening, because it allows us to understand what they did a little bit better. But it also is a little bit of a danger to us in terms of our preservation. Because if we get too analytical and too scientific about it, we lose their approach to it.

Harmony: You talked about some of the scientific discoveries that are being made at this time. As a 21st-century craftsman or tradesman, there’s a threshold of scientific knowledge that you can go up to, and not cross. What science is available to these 18th-century tradespeople that they would have been using that you must use now as you recreate their trade?

Jay: That’s a tough question. Because it’s very hard to get inside the heads of those people doing the work 200, 250 years ago. I would say that for the average tradesman, there probably wasn’t much of what we considered to be science at all. Then there were the ones that were just curious, that did something and said, “Hey, that didn’t work like I expected it to. I wonder why that was the case?”

There was a huge separation at that time between sort of academic natural philosophy or science as we would call it, and the hands-on end of it. I think that the elite saw themselves being very theoretical. It wasn’t something you wanted to get your hands dirty doing, it was just something you wanted to understand in an intellectual kind of way. Tradespeople, on the other hand, didn’t have much use for that very theoretical stuff because there was really no way they could apply it.

Harmony: I imagine that for trades like the carpenter, or the cooper or  wheelwright, a lot of these people must be having to use some form of geometry in order to plan out their projects. They’re using science that goes back to, Pythagoras, Archimedes?

Jay: Right. If you’re talking about basic mathematics, there’s a huge application of that. If you read just about any architectural book from the period, just about any furniture-making book from the period, wheelwright’s work, even cookbooks. There’s an assumption that one of the tasks of the student is to teach themselves basic mathematics. Now, it’s like the other things we’ve been talking about. We don’t know how often that actually happened. Certainly theoretically there’s a huge emphasis on it.

If you look in the beginning of Chippendale’s book on furniture, for example, not only is there a discussion of formal, classical orders and their columns and their proportions, but there’s a whole page of geometric exercises that allow you to use a pair of compasses to lay out all the different curves that are involved in moldings. They’re all mathematically derived. So, that’s part of it.

Part of it is simple things, like if you had a square balk of wood that you want to make a mast out of, how do you calculate making a tapered octagon out of it? Now you can do that mathematically. You can sit down and calculate that out longhand, which is pretty much the option they had. Or, in many cases, they were provided with tools by some of the deep thinkers of the time that allowed them to do it, again, very empirically.

Harmony: So it might be easy to assume that an 18th-century craft or trade is more of a crude science. But it turns out that there’s actually a lot of complexity to each of those trades, and a whole lot of learned skill and knowledge that’s learned through practice.

But in reality, because they didn’t have that sort of theoretical basis to rely on, to say “Oh, that’s the vinegar and the soda doing their thing together.” Probably in some ways they were much more subtly attuned to what’s going on than a lot of people today. Not everybody, but a lot of people.

I think in the 18th century you did it until it worked, and you remembered extremely well how you did it so you could make it work again. Today we sit down and figure out how it ought to work. If it doesn’t, we go back and figure some more.

Jay: I think you’ll find them everywhere. But you’ve got to look. I think you have the choice. You’ve got three choices. You can look at it as an 18th-century person would look at it, and say: That’s cool. That guy really knows what he’s doing. He hit that just the right way, and with only four blows, he made a nail. He really knows what he’s doing. He’s fast.

You could look at it from the 21st-century way of, my gosh, they’re adding that base, which is pH x to that acid which is pH x and let me see, I will sit down and we’ll figure out what the chemical equation and reaction to that is and maybe the best way to do it is a combination of those two. It’s to be able to stand back and take both of those approaches to appreciate what’s going on. Saying “Wow, that’s really magic.”It’s so neat that it works and wow that’s really science, and it’s so neat that it works.

Harmony: Thank you so much for being here with us today.

Harmony: And be sure to tune in for the Electronic Field Trip “˜The Amazing Trade Shop Science Race” this Thursday January 13th.</p>