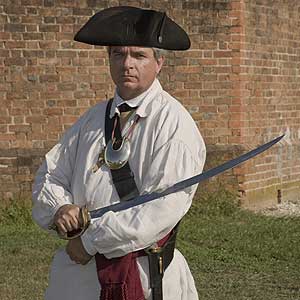 Pass through the gates of the military encampment and you’ll become the newest member of the Williamsburg Regiment. Learn to drill, march, and think as a unit, leaving behind the life you knew for a chance at the future you hope for. Our guest Dale Smoot commands the recruits.

Harmony Hunter: Hey, welcome to the podcast. I’m Harmony Hunter. Just one street over from Williamsburg’s main thoroughfare, on the corner of Botetourt and Nicholson Street, you’ll find a busy military encampment. New recruits drill, tent flaps snap in the breeze and the daily life of a soldier’s camp is made real.

Our guest today is Dale Smoot, who’s come by to give us an overview of that military encampment and what they try to show the visitors who drop by. Dale, thank you for being here today.

Dale Smoot: Well thank you for inviting me.

Harmony: So what are the outlines of the military encampment this summer? This is a short-term installation just for the summer months?

Harmony: Well visually, let’s just tell folks what this looks like for a listening audience. What can they picture in their minds when they’re thinking of a military encampment?

Dale: Well first of all, there is a science to laying out a military camp. It’s called the “Art of Castrametation.” Depending upon the size of the Army, you want to be able to defend that in case you are attacked. So they lay out the camp according to the number of men that are going to be encamped there.

Our encampment is laid out in the fashion of showing a company of men that are being formed up, and that’s because Williamsburg is sort of the gathering place for Virginia’s Army. The center of the hub of it all is the Magazine, which is the military storehouse and that is the reason why you’ll find camps showing up around Williamsburg at the earlier part of the war.

First of all, the military system of Virginia has been around for quite some time, but laws governing the militia system, which is part of the military system, had been allowed to lapse back in 1773, and everything wasn’t put back onto a proper foundation of how it was before that until the Third Virginia Convention in the summer of 1775; after the gunpowder incident, after Lord Dunmore, our Governor flees Williamsburg.

Virginia, Williamsburg is the rallying place of many men that had been coming from all over to protect the remaining supplies after the gunpowder incident in April of ’75, and camps appeared in a haphazard way in the very beginning. You find that some of the militiamen were using Mr. Waller’s grove. There were even comments in the newspaper about the men chopping down his fruit trees to use for firewood, which was disturbing.

There were many men that were away from their counties that normally controlled the independent companies that had been formed because of the lack of regular militia. So the Third Virginia Convention disbands them, and sets up our basic militia but also 16 military districts that Virginia’s divided into and each military district is to have a 500-man minute battalion.

From that, they have a draw a company of men from each of the military districts to form a full-time Virginia Army, the first and second Virginia regiment, and what we depict in Williamsburg and what we’re going to try to show this year is the early war period. In the past we’ve also shown the later war period because after Virginia sends 15 regiments north to be a part of the Continental Army, there’s a need for the internal defense of Virginia, and that’s the state garrison regiment then 1778.

But getting back to this year, we’re going to be focusing in more on early war period. So we’re going to be talking about those minute battalions, Culpepper Minute Battalions, is called to Williamsburg to help guard the area. Part of that unit joins the second Virginia regiment and goes to Norfolk and finally engages Lord Dunmore and his loyalists at Great Bridge in December of 1775.

Harmony: So when you talk about a minute battalion, is this with like we can think about minutemen who are ready in a minute?

Dale: That is correct. They take 500 men from a military district and give them 20 days training above and beyond what they would normally get in the regular militia. They are going to be 10 companies of 50 men each that are going to be able to respond to any threat in that geographic region immediately with the hope of cycling all eligible males through the minute battalion over a two-year period. That’s what it appeared on paper. What happens in reality often are two different things.

Harmony: So when they’re at camp, when they’re in that encampment, what is their job there? Are they just being in a state of readiness and drilling andâ€¦?

Dale: Well it’s basically, many are learning the military drill for the first time in a more formal setting than how they are going to be functioning as a regiment eventually, a company within a regiment, 10 companies within a regiment, a company of roughly 70 men counting your officers and your duty fifer and drummer make up one company of 10 companies that are going to be a part of the regiments.

So you’re learning more of the structure of the Army, becoming a little bit more formal in your drill than maybe what you did around your home for immediate.

Depending on if you lived on the coast of Virginia or on the frontier, you’re going to find militia readiness in various states of unreadiness, actually. If you’re on the coast there’s more of a threat of attack. If you’re on the frontier, more of a threat. So you find men from those parts of the country tend to have a little bit more training maybe than those that live in the interior parts.

So there’s a different degree of competency of the men and that’s what we try to depict. Everybody coming through the gate, as soon as they step through the gate, are now capable of serving whether they are young, old, male or female, we treat them all as if they have enlisted in the Virginia Regiment and are here ready to fight and defend the country of Virginia.

Harmony: And this is the fun part of the experience at the military encampment. When visitors walk into that encampment, they become soldiers and they become involved in the life of the camp. What kind of activities, what kind of things are happening in that camp?

Dale: Well, to begin with, we have them come into the camp and they’re walking through the tent area, and we hope we will be able to inform them of their conditions that they are going to have to live under. Many are often told about the numbers that assigned to a tent, which [due to] the lack of tents, there were six assigned to a tent. And they say, “How did all six get in there?” Well, they can fit, but not all are going to be off duty to enjoy each other’s company every night.

There’s work to be done night and day in the military, so often when they hear six to a tent there might be two, three, maybe four that are off duty that are going to be sharing that tent that night instead of all six of them. But occasionally there’s those that question the sergeant and sergeant shows, by having them enter the tent and lay down, and show that they can fit six in there. So that’s often a fun thing for the families that come through to see that conditions aren’t exactly what you think of on a camping trip today in today’s world.

Harmony: And they drill as well at camp.

Dale: Oh yes, we take them and one of the first things is to indoctrinate them into the commands of the sergeant. I try to emphasize staying together, moving together as one, that they’re no longer individuals, they’re a unit. And that’s part of the drill is showing them that everybody moves in unison and together that that accomplishes the greater good in the field. And that’s what they have to start thinking in those lines and it’s fun to see the reactions to those that haven’t been exposed to that before.

Harmony: Or those who have been exposed to it in a modern context, who might be learning something different when they’re learning about military procedure in the 18th-century context.

Harmony: The kids must love that at the dinner table that night.

Dale: And to watch dad who’s been a veteran that is accustomed to doing the modern military drill, being informed that his drill is not correct, it’s the 18th-century drill that he’s doing. It can be amusing for the whole family.

Harmony: It sounds like fun. And to me, I think one of the greater lessons, one of the more important things about this encampment is, it seems to me at Williamsburg, and rightly so, we focus a lot on the ideas of the war, the Patrick Henrys, the great orators, the politicians and the revolutionary fervor, but we might not as often think about the soldiers; the men who actually went to war, and it seems to me that this encampment helps to kind of make that experience real.

Dale: Well we try to show facets of the military that would address day to day living. Where am I going to sleep? What am I going to eat? What am I supposed to be wearing? How am I supposed to carry myself? I have now been taken off of a farm where the nearest person I might know is a mile and a half down the road and put into sharing a space now with six other people that’s in a space that there’s 60 of us within a very small city that’s being formed. And they’re having to conform with it.

Health is going to be a big factor. Sanitation; a big factor. How they survive, it shows that in past campaigns for every soldier dying in the field from bullet, bayonet, tomahawk or arrow, three dye in camp of sickness and disease. And that’s something that’s stressed is the cleanliness or the lack thereof that is something that they need to address as well as their duties.

That they are now having to give up individual liberty for the common good is something else that’s often mentioned. You’re no longer an individual, you will move as a unit, stay as a unit and that’s how you will survive. So that kind of instilling from a free-spirited person living on a farm to now thrust him to a wall of men to defend home and country.

Harmony: What a shock that must be. What’s the most important thing for you to try to communicate to people who come through and get a little glimpse of camp life?

Dale: Well if they can just carry away that it was a great sacrifice, and I still think that today for the military. It’s a great sacrifice for one to give for his country and that those that went before us did it willingly and it was, you know, something that generations to come can appreciate.