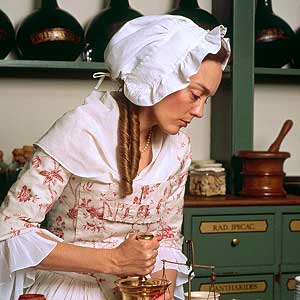 The common cold was a nuisance our forbears suffered in much the same way we do today. But what remedies were uniquely colonial? Eighteenth-century apothecarist Robin Kipps shares the causes and eases for the cold.

Harmony Hunter: Hi, welcome to the podcast. I’m Harmony Hunter. Well, fighting a cold is lousy in any century. Despite all of medicines advances there’s still not a whole lot we can do when we come down with the sniffles. But what were the remedies in the 18th century? Robin Kipps from Colonial Williamsburg’s Pasteur and Galt Apothecary joins us now. She’s been studying 18th-century medicine for over 30 years. Robin, thank you for being here today.

Robin Kipps: Well thank you for inviting me, Harmony.

Harmony: Let’s start by thinking about what are the causes of the cold. What did they understand in the 18th century, versus what we understand about colds and germ theory today?

Robin: Well this was an idea that really surprised me. There’s a number of 18th century physicians, Dr. William Buchan, who writes an international best seller on home medicine, and Dr. Hugh Smithson, who is also pretty internationally acclaimed, they both state that colds were caused by obstructed perspiration. So you think about 18th century, you’re inside a building where it’s nice and warm in the winter time then you suddenly go outside where it’s cold and the perspiration would stop, so they attribute the cold symptoms to obstructed perspiration.

Harmony: So they were connecting colds to the winter season and we understand today that colds are more prevalent in the winter because they pointed their finger at obstructed perspiration.

Robin: Right, and so like today we’d say, you know, being out in the cold does not really cause a cold, but that’s where that idea came from.

Harmony: So what about the idea of viruses causing illnesses? That was an idea that would be foreign to them at the time?

Robin: Right. You do see a few early theorists, like David McBride publishes in the 1770s this idea that there’s particles or miasmata in the air and these particles can get into a person’s system and make them sick. Since he does mention about being in crowded rooms with lots of people and that could be a place where these particles are present. So there’s interesting theories going on at this point, but the old idea that your four body humors, your black bile, yellow bile, blood, phlegm, professional medicine by our time 1770s is basically saying that whole Gaelinic theory of humors is history. So it morphs between the Gaelinc’s theory of humors and viruses of the 1800s.

Harmony: And we’re straddling the divide here, right, in the 18th century?

Robin: Age of Enlightenment is kind of like right in the middle with their own interesting ideas.

Harmony: And I’ve heard you say before that germs; a germ to an 18th century colonist, that was something that a plant, that was a part of a plant, germ theory was a foreign idea to them.

Robin: Right, right. And that’s the fun thing about reading 18th century dictionaries, cause they’ll use the word “germ” and say, “Oh, a germ is a plant bud, something that germinates.” So you see all these words used in the 18th century but sometimes with different definitions.

Harmony: Well regardless of whether you understand exactly how you got sick, you still know when you are sick. What were some of the remedies or treatments they attempted?

Robin: Well the interesting thing is that both in home medical books and professional medical books, everybody agrees that you need to stay home and get plenty of rest, stay warm because you’re trying to get this perspiration to start working again. And then we don’t understand dehydration yet in the 18th century, but they do talk about fluids to quench the thirst. And then you’re treating symptoms.

Harmony: Which is pretty much all we can do today.

Robin: In some cases, yes.

Harmony: So when we’re talking about treatment, are they trying to encourage people to sweat again to overcome this obstruction of sweat, so how would that be done? What are the steps?

Robin: Well the big thing that they’re saying is just in general they want you inside wrapped up in blankets in bed trying to get warm to create that perspiration.

Harmony: And you still hear people talking about trying to sweat out a fever or sweat out a cold.

Harmony: Now some of the treatments that we have today I wonder if they have their roots in the 18th century. Things like honey or lemon or like a menthol?

Robin: And that’s the fun thing is to compare 18th century with contemporary medicines. So, yes, honey and lemon is used as a treatment and there are home medical books telling you to take a lemon, cut a hole in it, pour honey in the hole, roast it on your fireplace hearth, warm it up and then mix all that together and use it for a cough.

Harmony: You would drink it?

Robin: You would drink it. Licorice, which is still used in modern over-the-counter products for coughs, you will see in the 18th century pharmacy books. They make up little lozenges for licorice at the time. And the interesting thing about menthol is that it is a naturally-occurring product found in peppermint, but it’s not actually isolated. The menthol itself is not actually isolated until the 1770s, and it’s not named until the 1860s so that’s why when you look at your 18th-century books you’ll see peppermint oil, but you won’t see the word “menthol” in use.

Harmony: So even though they were using it, they might not have understood what the active agent was, but it’s still they know the efficacy of it.

Robin: Right. So chemistry is an emerging science in the 1700s. So like today we would say coffee keeps you awake because it’s caffeine. Well that’s not discovered until 1820s so all these active ingredients in most cases haven’t been isolated yet. So we talk about plants having healing virtues. We know there’s something in there, but we can’t isolate it with our 18th-century chemistry for the most part.

Harmony: What are we seeing written about colds in the 18th century by either professionals or maybe just laypeople?

Robin: Home medical books in general tend to focus on things that are locally available and are cheap. So you’ll see things like turnip juice syrup for coughs where you’d actually take a turnip, slice it, sprinkle sugar on it and the juice from the turnip mixes with the sugar and you now have cough syrup. So some things you’ll see just in home medical books. You wouldn’t see turnip juice syrup in your pharmacy textbooks.

And then there are some things that you’ll see in both professional and domestic references. Elderberry is listed for colds in both home medical books and professional books, and that one’s kind of interesting because there were some double blind experiments done a number of years ago and they’re finding some antiviral properties in it. So it’s something that in 18th century they say, “Seems to help,” but again we don’t have the chemistry to tell you why.

Harmony: So speaking about some of those home medicines, are there ones that we have found really don’t have an effect that are really no longer in use?

Robin: One of the interesting cold medicines that’s listed in the professional pharmacy books is no longer used. So William Lewis mentions in his pharmacy books of 1753 that some medicines for colds can be made of millipedes, garlic and soap. And it’s like, “Yes, modern medicine has studied garlic for some of its weak antibiotic properties, but we’ve never seen any current modern research about millipedes that there’s anything in there that could help colds.” But then you never know. We keep finding interesting bio-compounds in lots of unusual places today.

Harmony: So are there medicines from the 18th century that are being re-examined in addition to some of those insect ones you mentioned?

Robin: Well in addition to the elderberry, I think our favorite one is chocolate. So if you can imagine 18th-century doctors saying, “I want you to drink hot chocolate for your cough,” which would make everybody today happy if your doctor said that. But there have been actually modern studies and there was a double blind experiment in Britain done not too long ago where they compared codeine against a really high percentage of dark chocolate. It was one double blind experiment, but the dark chocolate beat the codeine. So all of us are saying, “That would be great, do some more research.”

Harmony: Now what about the flu? We talked about colds but other contagious viruses would hit the colonists. What about flu?

Harmony: And that actually led to some deadly epidemics.

Robin: There are some serious epidemics. William Curie wrote a book in 1792 about diseases in the United States and he actually mentions that there were some epidemics of the flu: 1733, 1761, 1789. It would be interesting to go back and kind of compare the flu then with the flu now.

Harmony: You always give us so much to think about when we compare 18th century medicine to modern medicine. The tendency is to think of 18th century study as sort of backwards and unenlightened, but there’s really a lot that the two have in common. What kind of thoughts do you like to share with people when we’re thinking about 18th century medicine?

Robin: Well you think of 18th century medicine. It’s like science at its very basics. Because chemistry is an emerging science, biology, when you get your microscope out, is still called the study of optics. Physics is the big science. So you see models on how the body works based on physics: your body’s a machine.

So it’s like 18th century science at its very basic elements, and the fun thing is to trace the things learned from the 18th century and previous and how they become the stepping stones for the future. And we always say we hope medical historians of the future will look back at the 21st century and say, “Alright, this is what they knew, this is why they believed it and then compare where medicine goes later.

Harmony: And just for fun I want to ask you, you work in the apothecary, you have all of these remedies at your fingertips. When you get a sore throat, when you get a cold, what do you reach for?

Robin: I always go to a modern drug store and read the labels and have fun comparing what’s in the modern drugs with what’s in my 18th century pharmacy books, but we do not go home and practice medicine. We love to go talk to modern pharmacists.

Harmony: Well Robin, thank you for being here and I wish you good health. Thank you.

Robin: You too, and don’t get sick this year.