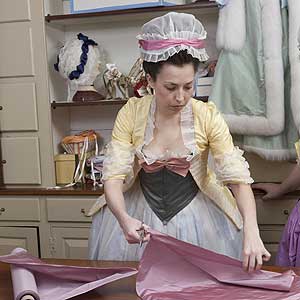 Draping, cutting, sewing, and trim: these are the hallmarks of the milliner and mantua-maker’s craft. Apprentice Sarah Woodyard is near completion of her apprenticeship, and at the threshold of attaining journeywoman status.

Harmony Hunter: Hi, welcome to the podcast. I’m Harmony Hunter. Joining the ranks of the tradespeople who populate the workshops that line the Historic Area is a rare honor. Few artisans can say they have learned by the side of a master and practiced their trade in true historic fashion with period tools and techniques.

Sarah Woodyard is our guest today, and she is one of those happy few who call the 18th century home. She is just wrapping up her apprenticeship in the Margareet Hunter shop, and she’s stopped in today to tell us about learning to be a Milliner and Mantua maker in the 18th century. Sarah, thank you for being here today.

Sarah Woodyard: Thank you for having me.

Sarah: I think initially you bring on a young girl who already knows how to sew and so she’s already a seamstress who works well with her needle as the trade guides describe. So she would initially be starting in the shop being handed probably basic items to sew.

For example, with gown making long seams would be a great thing for an apprentice to start out with, sewing hems. Then eventually building up her knowledge and skill of the more complicated, say shapes, of cutting a gown that fits the body, or say for example, for millenary we make up all the articles of the wardrobe so learning how to cut out a cap or aprons or cloaks or neck stocks and wig bags, again, without using any kind of template, but really training her eye and honing the visual understanding of those garments.

Harmony: I had no idea this would be done without a pattern.

Harmony: And how long would this apprenticeship normally last?

Sarah: Well it depends. Here in Virginia, it’s negotiable. So a young woman serving an apprenticeship as a milliner or Mantua maker might spend a year studying her trade. She might spend seven or eight years learning her trade. In my case I’m obviously doing it in seven years.

Harmony: So you’re finishing your seven-year apprenticeship. After that’s completed what will your title be?

Sarah: After I’m done I’ll become a journeywoman milliner and mantua maker. Within our trades we are gender specific, because those trades are female dominated. If I were to serve an apprenticeship as say a silversmith or a blacksmith, when I’m done, I would be a journeyman, but in the case of me it’s a journeywoman.

Sarah: Oh yeah, absolutely. And you know here in our backyard we’ve got many women working in business and trade. The shop that I work in, Margaret Hunter, she was the proprietress in the shop. She was a single woman so she owned the business outright. So we’ve got a lot of great conversation to be had, absolutely, about milliners in business, the international trade that they’re going to be taking part in. Because not only does Margaret make caps and cloaks, but she’s importing fabrics and ribbons and jewelry for sale and she’s part of this larger 18th century global trade and economy.

Sarah: I think as it relates to a young girl in the 18th century, she’s definitely going to be taught the details of business. She’s going to have to be good at reading, very good at writing, she’s going to have to understand account book keeping and so, yeah, like you say the practical kind of business skill that she can then apply to her work later on.

As Margaret Hunter was doing in our shop, again, she’s importing a lot of goods from England. So that young apprentice would have to understand working with a factor in London, dealing with business, halfway across the world. But then also, of course, the practical skill of being able to sew these objects, keep up to date with the fashions so there’s a lot of communication that happens and learning to communicate with others so that you can then sell your product to your customers who want to know what’s the latest fashionable goods that are coming in from England.

So I think that being a good communicator, being a good businesswoman and then being, obviously, a good stitcher and a good mantua maker, milliner is also important. When it comes to mantua-making, we want to make sure we cut the fabric to flatter the figure and so truly understanding the sense of the anatomy of the body is very important. You really have this very intimate relationship with your customers and it’s going to be your responsibility to kind of keep that information to yourself in a way; kind of like a hairdresser. You know, they kind of know a lot more about you than other people do in some cases.

Harmony: You’ve used the word mantua. If that’s unfamiliar to some folks let’s talk about what that means when you use that word.

Sarah: Yea, absolutely. Mantua-making is your 18th century dressmaker and mantuas were a style of gown that women were wearing in the early part of the 18th century. The trade actually develops at the end of the 17th century. Women are wearing the style of gown called a mantua, and this trade develops at that point. So it seems as though the women making the mantuas are called mantua makers. There’s also the interpretation that the term mantua comes from the French term “manteau” and that means a cloak or a robe.

Harmony: So I interrupted you, and you had talked about something I want to hear more about is that the engineering of a gown and how it works with anatomy. A gown has to function. Your arms have to move, there has to be room for you to bend and turn. Talk to me about how you learn about a garment once it’s on the body, or what you learn about a garment once it’s actually on somebody’s person and they’re having to operate in it.

Sarah: Yeah, that’s a fantastic point. It actually brings to mind a project that I worked on a couple of years ago. I made a gown for Ashlynn, who is one of our female blacksmiths here in town. So when I made that gown, I absolutely had to take into account the physical work that she was doing and that the gown had to go through. You know, she has to lift her arms above her head in order to pump the bellows. You know, she’s hammering on her work on a daily basis.

So when I cut the gown I definitely cut the pieces to fit her stays. Of course, the stays being the support garment that women wear supporting the body, which is useful for her work because it does give her the support she needs. But again, cutting it to fit the stays nice and snug, making sure that the sleeve is also actually cut relatively fitted, because if something is fitted it gives it more range of motion.

For example, sleeves are cut very high up under the arm, and that actually allows a woman to pull her arm or have her arm above her head and, again, able to move in any place she needs to be. So I definitely took that into consideration when I was cutting out her gown and cut the sleeves still fitted, but I put a little bit more fabric in the back of the sleeve cap so that she could, again, completely raise her arm and move it every which way as she is working in her shop.

Harmony: Things that hopefully she will never even have to think about as she’s workingâ€¦

Harmony: In your years of study through your apprenticeship did you develop a sort of a special area of expertise or area of special interests?

Sarah: There’s a couple of garments and couple areas that I’m very interested in. One of those areas is actually making trims for ladies clothes. There’s a particular type of trim, a fringed trim that was separately applied to a gown or to a hat or to a muff that was often made in England buy a whole separate trade, but some milliners also would practice other branches of millenary that might include, say, trim making or embroidery, but I’ve really taken to the trim making.

It’s essentially tying lots of little knots and silk filament and then weaving it into a tape or tying it on to ribbon to make long yardage for then applying to gowns. So I’ve been really kind of focusing on the technology of that aspect of our trade and trying to get very fast at the work. Not just doing it as you would say craft in your spare time, but being able to produce it to that 18th century work standard just like we’re trying to produce gowns and other articles to the 18th century work standard.

Harmony: So you’re completing your apprenticeship that culminates with a final project for you. What shape does that take for you?

Sarah: Well the final projects that we have to complete to prove our journeywoman’s status is actually Â threefold.

To become a journeywoman as a milliner and mantua maker I have to complete a set of final projects. One of those projects, I have to look at an image and bring it to life. I have to study an antique object and make an exact copy off of it. And then I have my own choice, and I can either do an exact copy or make a gown for somebody in town.

I’ve completed two out of three of those final projects right now. I just completed a project called “A Morning Ramble” or “The Milliner’s Shop” where I was forewoman and created three different outfits for woman to wear in a tableau that was presented at our “Millenary Through Time” conference. So I gave a lecture bringing this picture to life as well as talked a lot about the context of the image in the 18th century and what it meant to the milliner and their trade. When I was forewoman and organizing the project I looked at period images. I looked at a couple original garments that we have here at Colonial Williamsburg to help me better understand the context of the clothes that I was looking at and then, of course, sewed them up in the shop.

Harmony: And as you’re sewing you mentioned that you are doing this all by eye.

Sarah: Yes, so when I cut, for example, one of the jackets for one of the ladies in the print I was laying the fabric directly against the stays and then just cutting out the shape of the neckline, cutting the curve over the hip, sculpting the fabric over her stays and over her body and so at that point I was just integrating what I had learned through years of study and my eye at that point had been trained well enough to know the correct proportion for the neckline, the correct shape that goes over the hips and so forth.

Harmony: It’s been wonderful having you here today and I hope that all of our listeners get a chance to come and visit you and the other talented people in the Margaret Hunter Shop. Thank you.

Sarah: Thank you so much for having me today.