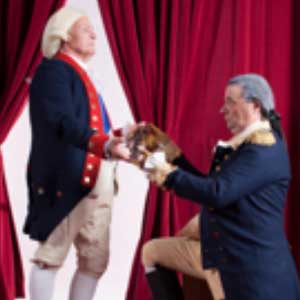 In 1776, England had every expectation of winning a war with her upstart American colonies, and rightly so. And what if the war had gone their way? This is the premise of a class of fiction called “alternate history,” and Director of Publications Paul Aron has found some food for thought in its reimagined histories.

Harmony Hunter: Hi, welcome to the podcast. I’m Harmony Hunter. We spend a lot of time celebrating the American Revolution, but in truth, it’s a war we had no business winning. With barely a government and no standing army, the colonies really didn’t stand a chance against Great Britain. What if the British had won? There’s a whole genre of fiction devoted to the question. Director of Publications Paul Aron has spent some time reading it. Paul’s my guest today. Thank you for being here today, Paul.

Paul Aron: Thank you for having me.

Harmony: Well we’re so glad you could stop by to talk to us about this genre of fiction called “alternate history.” So we’re talking about sort of species of fiction that talks about if history had turned out differently. And you found a little pocket of it that talks about the American Revolution. What if the British had won? Which probably, you know, everybody would have bet on that to begin with.

Paul: You’re absolutely right. It was as improbable a victory one could imagine. I mean this was an under manned, under armed, underfed army that was often at the brink of defeat, and it seemed like again and again luck saved the day. David McCullough, the historian wrote an essay once called “What the Fog Wrought.” And it talked about Washington’s escape in 1776 across the East River after being defeated by the British and just barely escaping because of a dense fog that allowed the army to escape. McCullough basically said, “Had that not happened, the army would have been lost, the Revolution would have been lost.” I mean, again and again you saw how, it just seemed like luck intervened on behalf of the American cause.

Robert Sobel wrote a whole novel, it’s called “For Want of a Nail” that grew out of a British win at Saratoga. This is often considered the turning point in the Revolution and it doesn’t turn. The French back away from supporting us after we lose at Saratoga. You know, what if Washington had decided not to cross the icy Delaware? What if the storm hadn’t thwarted Cornwallis’s escape from Yorktown? Again and again, you can see how history turns on a small point, how the Revolution could easily have been lost.

There’s even a smaller genre of stories on how the Revolution could not have happened at all. I mean, the easiest way for the British to have won would have been not to have fought at all. And there are few stories, I remember one, these are just short stories, but in one case the British satisfied the Americans by giving the colonies seats in Parliament. I mean there’s no, the cry of “no taxation without representation” doesn’t have much meaning, if in fact, you get representation.

There’s another where Thomas Paine falls in love and therefore doesn’t meet Franklin and doesn’t come to America. But, you’re absolutely right, I mean history to us in retrospect seems inevitable, but to them -- and in retrospect even now --it almost seems like it should have been inevitable that the British would have won, not the Americans.

Harmony: It really gives you pause to think about how, you know, there but for the fog. If there had been a seat in Parliament offered, so many things might be different. We might still be British citizens.

We should mention that this is fiction and so all of this is sort of supposition so I mean who’s to say if there was no Revolution that the British government would have continued on the same course, that history sees today. But if we assume that British law followed the same course that it does in history we know today, there are some populations, some groups of the population that would be better off if we were still British citizens.

Paul: Absolutely, there are stories that illustrate just that point how the world would have been better. Indians in most of these stories come out a lot better. Harry Turtledove and Richard Dreyfuss wrote a novel -- I should mention in passing, that is probably the only novel written by both a Hugo Award Winner and an Oscar Winner -- but Turtledove and Dreyfuss wrote a novel, it was called “The Two Georges,” referring to Washington and King George. And in this novel Washington bows before King George, but the point you’re making is certainly seen there. The novel takes place in a 20th century, late 20th century North America and there are some independent Indian nations fully intact in the 20th century.

Harmony: And this isn’t just an active imagination. There’s actually, it has a basis in truth that some of the policies toward Native Americansâ€¦

Harmony: â€¦of the British were different than the onesâ€¦

Paul: Were very different, and in fact, some of them are what drove the Americans toward the Revolution, though we don’t like to see it that way. And African Americans too. The British Empire abolished slavery during the 1830s. There are certainly novels and stories in which in most of these alternative histories, both and Indians and blacks are better off and quite a few of them the whole world is better off.

Harmony: Some of these things that we’re imagining now, people in society whose lot would have been better, it sounds almost like, you know, maybe the Revolution wasn’t such a great thing.

But one area where I think the Revolution definitely gives us a benefit is in some sort of equalizing our social standing, the democracy of class that happens. So something that we might have retained under British rule was a real social distinction that might have kept certain geniuses from ascending, but what the Revolution doesâ€¦

The Declaration of Independence, the Constitution, the Founders ideas and documents obviously there were flaws. Obviously there were flaws. Obviously in what the Founders did. Obviously the promise of the Declaration of Independence was not fulfilled in 1776 for Indians or for blacks or for women or for that matter for any number of other groups, but that promise that inspiration certainly was a factor in changing the, at least I believe, was a factor in changing the world for the better. One should not draw from what, after all are fantasy novels, science fiction novels, any definitive conclusions about the meaning of our Revolution, but it is fun to speculate.

Harmony: It certainly is fun to speculate and you’ve pointed out that its fantasy, but I think it’s important to remember the point that these novels make or the point that gets brought to light, is that a very small action, something insignificant, the weather, somebody you bump into a coffee house, can change the course of history. And I think that’s really so important to remember as we think about the mission of Colonial Williamsburg for active citizenship that every day when you leave the house, as Dr. Bill White has said, you’re making history. Every time you walk out the door: today. It doesn’t seem important, it doesn’t seem momentous, but everything you do every day is history. And that’s why it’s so important to be a citizen, to be an active citizen.

Paul: Yes, and I think historians who have in the past sort of held alternate history or as they prefer to call it, “counterfactuals,” somewhat in disdain are coming to appreciate more the role of contingency: how little things can change the world. Robert Sobel’s novel, which I think I mentioned, is called “For Want of a Nail,” and it turns, it has Gates hesitating at Saratoga and British reinforcements arriving.

But even the title of that novel makes clear how little, the point is how small things can change the world in big ways. The title refers to, “For Want of a Nail” refers to Richard III’s unhorsing, which this is the same scene where Shakespeare has Richard say, “My kingdom for a horse.” And the phrase for “For Want of a Nail” comes from a 17th century poem that’s generally attributed, we’re not sure, but George Herbert and it goes:

For want of a nail the shoe was lost.

For want of a shoe the horse was lost.

For want of a horse the rider was lost.

[For want of a rider the message was lost.

For want of a message the battle was lost].

For want of a battle the kingdom was lost.

And all for the want of a horseshoe nail.

And you can look at this two ways. You can say perhaps this means we can’t predict how our actions will change the world so why bother, but I hope that we have the opposite response, that it inspires us to do what we can as citizens because you never know what small action you take can lead to big changes.

Harmony: Paul, thank you so much for being our guest today. This has been a fun topic and a really thought-provoking one. We really appreciate you coming by today.

Paul: I thank you.

in Research and Publications | 3 comments