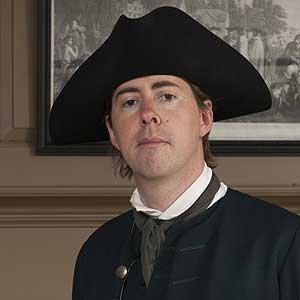 Williamsburg was a town of revolutionaries, but not everyone thought rebellion was a good idea. Men like William Hunter Jr., printer of the Virginia Gazette, stayed loyal to king and country. Actor-Interpreter Sam Miller explains how patriotic fervor made life difficult for those men and women who opposed it.

Harmony Hunter: Hi, welcome to the podcast. I’m Harmony Hunter. In the 18th century not everyone in Williamsburg was eager for revolution. Called loyalists, these citizens thought it made a lot more sense to stay subjects of the king and resolve their differences peacefully, or forget them altogether. History shows us that many colonists from the very prominent to the most humble were loyalists.

One such citizen was printer William Hunter, who is portrayed by actor and interpreter Sam Miller in Colonial Williamsburg’s Revolutionary City. Sam, thank you for being here today.

Sam Miller: Thanks for having me here.

Harmony: So just to briefly remind folks what Revolutionary City is, this is an interactive street theater program that we do in Colonial Williamsburg’s Historic Area that lets visitors actually interact with some of the citizens of the 18th century and of the revolutionary era, to be able to talk to them in first person and be able to sort of encounter these living ghosts of the Revolution. So the character you portray, William Hunter, is actually a historic character. He was a printer in Williamsburg. Tell us about Hunter.

Sam: William Hunter, Jr. as a matter of fact. He is actually the son of William Hunter who was known for many, many decades as one of the most prominent printers of the Virginia Gazette of which there were several that were published concurrently at the time.

William Hunter was a good friend of Benjamin Franklin, and the two of them had been made deputy postmasters for North America and between the two of them they worked out a more efficient means of running the postal system in colonial America. William Hunter Jr. was actually not known even to be his son until William Hunter died when my character is at the age of 6 or 7. The only reason people knew about me is because my name was mentioned in the will. I was granted for when I came of age to have a half share in his business and to inherit his farm and his other properties.

I was raised from a young age by Benjamin Weldon who was a plantation owner about 6 miles west of Williamsburg, somewhere in James City County. So I was actually not raised by my parents. I was an illegitimate son. So when it came out in the will that I had inherited the business, the reaction generally people had was, “He had a son?”

I was educated, as a matter of fact, in the Franklin household in Philadelphia from the ages of about 9-13. I was in Philadelphia. I was educated more frequently, however, by his son, William Franklin, who at the time was the governor of New Jersey. I think a lot of my appreciation, a lot of William Hunter Jr.’s appreciation for the history and the ideals of the British Empire were probably, that influence, probably came most strongly from William Franklin’s teachings.

Then I came back to Williamsburg and studied in an apprenticeship until I came of age and by the time I was 21, right at the beginning of the Revolution in 1775 I became a co-printer of the Virginia Gazette, along with John Dickson who was at the time the mayor of Williamsburg.

Harmony: What a wonderful amount of history to have about this person that you’re portraying, to be able to piece that together and bring that sort of biographical detail to your interpretation.

Sam: Yea, it’s a very peculiar childhood he had too. He was just kind of passed around from one household to another as he grew up.

Harmony: And to think that he never knew his father, yet followed in his footsteps.

Harmony: So how didâ€¦you mention that William Hunter Jr.’s loyalist leanings probably were a result of his education in the Franklin household. How did that manifest itself? How do we see his loyalist tendencies?

Sam: He was definitely not well known to be a loyalist and certainly not at the beginning of the Revolution. I think he is smart enough to realize the amount of pressure that is being put on loyalists, especially in that very critical year of 1775 when there is that kind of vacuum that exists in government, and that vacuum is filled by Committees and Safety for example.

I’m willing to believe that he actually did have patriotic leanings at the beginning and that those evolved over the course of the war.

Harmony: To be a loyalist in Williamsburg, even just a little bit loyal, was a dangerous business, to be loyal to the king. Because as the patriotic fervor builds, these Committees of Safety are convened and what do they visit on loyalist citizens?

Sam: Well, not only in Virginia, but in other colonies as well, there was pretty much open harassment of anyone who was outspoken against the American cause or those who are known to violate the associations; those who are smuggling goods in and out of England or those that were stockpiling or hoarding certain types of goods that you weren’t supposed to have, for example, those who were actually holding on to their tea.

I believe there a good number of those who were either loyalists or not completely committed to the patriotic cause who are smart enough to simply, well for a better way of putting it, keep their mouths shut and they simply kept their opinions to themselves and kept out of the spotlight and they co-existed as best they could.

Sam: It certainly was in Virginia.

Harmony: â€¦and point out the logic that, “Hey, we’re going up against an enemy that has far greater resources than we do, this really doesn’t make sense, we’ll never win.”

Harmony: And then too when you think about the generation that was striving for equal rights and, you know, and the constitution and fair representation and fair government is the same generation that is coming up with these Committees of Safety, that we’re going to ride roughshod over civil rights, go through your belongings, you know, torture you in the streets with tar and feather. It really gives you a lot to think about when you examine more closely the revolutionary generation. We think of them as such giants, but there was someâ€¦it was messy, it was messy there in the beginning.

Sam: It was. It was. Well and I think the most critical year for that too was ’75 because we hadn’t declared our independence yet. We were still very confused about our national identity. I mean we weren’t sure ifâ€¦I mean there were some that were for the patriotic cause but were really just were not fighting for all of America, but were fighting for their individual colony.

Harmony: There’s so much more to understand about the Revolution, and that’s what I think is one of the great things about meeting your character in the Revolutionary City.

Harmony: What is it that you like about portraying William Hunter? What do you get to share with visitors?

Sam: I think, as with playing with any loyalist character, and certainly with playing this particular character, once the war is in progress is to play kind of a devil’s advocate with the audience. And I think that’s an experience that’s pretty surprising to them. There is, of course, the notion that everybody was in this together. It's hard to believe that there are those who think that the Revolution wasn’t a good idea in the first place.

In William Hunter’s case, I think part of that comes from I don’t think he believed that we should have declared out independence. He agreed with the grievances that we had with England with the taxation, with the coercive acts, with the blockading of Boston, but declaring our independence was one step too far. That these differences could have been worked out, that there was no reason why we couldn’t have secured our self-government as we’ve done it for all these years and have the best of both worlds without having to resort to completely abandoning ship.

And that’s an opinion I think a lot of people had. Maybe not the majority in Virginia, but it certainly is significant enough to have men like Hunter to go so far as to quit his paper after two and half years because he cannot in good conscience continue to print the paper with a patriotic man like John Dickson.

Harmony: It’s wonderful. It brings so much depth to the story of the Revolution and it’s great to see in first person what sort of challenges, what kind of difficulties the ordinary citizen faced when the situation materialized before them. Sam, we look forward to seeing you in the Revolutionary City. Thank you so much for being our guest today.