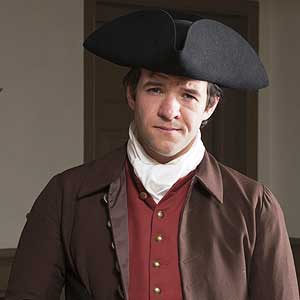 A quiet, restrained genius is animated on the streets of the Revolutionary City by Actor-Interpreter Bryan Austin. Hear his approach to filling the shoes of the fourth president.

Harmony Hunter: Hey, welcome to the podcast. I’m Harmony Hunter. He’s called the father of the Constitution, but up until now he hasn’t had a face in Colonial Williamsburg’s Historic Area. This Presidents Day we introduce James Madison, the fourth President and the man credited with composing our founding document and the champion of its first 10 amendments. He’s portrayed by Bryan Austin who joins us now. Bryan, thank you for being here today.

Harmony: Well Bryan, welcome, you are a new interpreter who is going to be bringing a new face to the Historic Area for us: James Madison. Tell me a little bit about yourself and how you came to be filling the shoes of the fourth President.

Bryan: So it was very intimidating at first, because of course a lot of people know about him and he’s pretty prevalent in U.S. history. And so I began studying just from the time period of 1775 to 1781, which is the time span we cover on the streets at Colonial Williamsburg and the Revolutionary City. I began basically 9-5 research, getting familiar with everything; the Constitution, his thoughts on government, the 1790s, all the way up through his presidency, war of 1812 and everything else. But generally you see James Madison as a very young man twenty five years old just getting started and thinking about what’s going to suit his government best.

Harmony: You mention 9-5 study. There’s a tremendous amount of preparation that you have to do to get ready to take on one of these founding father characters. There’s such a precedent set by the men here who portray -- the men and women -- who portray the other founders here. A lot of these folks you can bump into them on the street, ask them a question, and they have to know how to respond to that.

Harmony: Madison fills an important gap for us in our storytelling here in the Revolutionary City. We’ve had folks like Patrick Henry, Thomas Jefferson, a whole lot of notable founders on the streets, but Madison really allows us to round out this interpretation. What voice was Madison’s in the Revolutionary era? What was he bringing to the mix?

Bryan: Well one thing I always sort of bring with Madison is that the idea of the American Revolution is not just a war. It’s not something that’s to be won, and then we became this free country based on all these principles of liberty. You know, you have these sort of sayings that George Washington is the sword of the Revolution, Patrick Henry is the voice of the Revolution, you have Thomas Jefferson, he’s the pen of the Revolution. And all of them, by every account, can be referred to as almost a philosopher. But if Madison is anything in that respect, he’s very much the engineer. He’s thinking of how can we take these ideas, life, liberty, the pursuit of happiness and wrap that into proper legislation.

So his Revolution, it’s not on the battlefield, it’s in the capitol building, it’s in the documents he’s writing, it’s to make sure that once this war is done and the soldiers come home they have something better than what they left.

But as far as what he contributes to Williamsburg, particularly as a young man, is the beginning of something. People look at the founding fathers as these sort of old, wizened men who had all the answers and they didn’t. That’s the extraordinary thing is that it was very much a young man’s Revolution. Madison, in 1776 when he gets involved with the fifth Virginia Convention, is 25 years old. And he wasn’t focusing on laws that have been. He was focusing on what could be. I use the term a lot, “The government of the possible,” what can exist versus what has existed and works. And you see that in a lot of his early works, particularly with the 16th Article of the Declaration of Rights which is of course the article of guaranteeing the free exercise of religion which is the first time you see that in Virginia.

Harmony: This is a somewhat contentious statement, but Madison is often called the father of the Constitution. Where does that come from and why might it be considered a misnomer?

Bryan: It’s so interesting because, you know, Madison says, “Government is the work of many heads and many hands. There’s no one person pushing for it.”

I think the reason why he becomes the father of the Constitution is the amount passion and the work he puts into it because he is one of the major proponents of the Constitution. He attends every single day of the Constitutional convention. He takes strenuous notes on what happens. And before that, he spends the better part of 1786 researching confederations and why they don’t work and every form of republican government that came beforehand. So he has some idea of what’s really going to best work for America.

In the Ratification Convention, the argument he keeps going back to when all of these people are saying that this government is too powerful, it’s going to take advantage of our rights, he says, “Yes, but is this government necessary, and is it better than what we had?” For a man who is soft spoken he makes a lot of really concise arguments regarding why it’s necessary.

Harmony: And he gets it right, because here we are still basing our laws and our government around that document. It’s amazing in its flexibility, but also its foundation is solid.

Something that came up as the Constitution was being ratified was the idea of a Bill of Rights. Some people were for it, some people were against it. It’s amazing to think that it ever wasn’t conceived as part of the original document. It’s such a foregone conclusion now, but there were voices for and voices againstâ€¦

Harmony: â€¦a Bill of Rights. What was the argument behind that?

Bryan: A surprising thing, of course, because posterity knows that Madison eventually passes the Bill of Rights and he’s credited for that. The fascinating thing is that Madison initially didn’t think it was necessary, and actually was a bit afraid of a Bill of Rights, truth be told. Because his thought was: if you enumerate what people are entitled to, what happens to the things that aren’t stated? What happens to the rights aren’t included in that Bill of Rights, and what will the government do to take advantage of those things?

The reason Madison thought to exclude it is that the Constitution didn’t usurp anything that state government said. It gave the rules of a federal government. He essentially wanted the governments existing together. So when the time came to discuss the Bill of Rights he referred to it as a parchment barrier, you know, it exists in the states, therefore it doesn’t need to exist in a federal government because the federal government doesn’t trump the states, it just says what all the states together can do. But of course eventually he came around. It was one of the major arguments at the Ratification Convention. Patrick Henry kept saying, “There’s no protection of rights, no protection of rights.” So Madison says, “Ok, I’ll give you a Bill of Rights then.”

Harmony: What have you come to admire most about Madison as you’ve studied him?

Bryan: I think the thing I really like about him is that in most of his writings you see he is very constant to the ideas of rights. He’s very constant to the ideas of republican government, but he shifts on what is necessary in government based upon what’s going on at the time. He doesn’t adhere to one core “This is the way it is, this is the way it has to be, and if you don’t do it my way you’re wrong.”

His ability to compromise is really what stands out to me and I’ll cite the second bank of the United States towards the, I think, end of his presidency. The first bank he wasn’t for. Hamilton, if you recall in the 1790s set this up and basically tricked everybody into setting up a national bank, which Madison thought was very unconstitutional. He thought the idea of business and government needed to be separate.

But, in his presidency, when the time for the second bank came up, he passed it through. And his thought on that was the American people voted for it, they want it, it’s not my place to take it away. That’s not the power of the President.

So, he’s a guy who just saw a lot of things coming. He’s way smarter than I think I will ever be and when you read him you sort of you find so many parallels to today. You see, you know, that no government’s perfect in every respect and these are guys who saw that. You know, they didn’t sit and pat themselves on the back. After the Constitution, he’s like, “Oh, that could have been better. This could have been better, but we’ll work with what we got.”

And I think that attitude, that industrious attitude, is something that is so fascinating about our founding fathers because they all had that. You know, they all recognized their humanity and their mortality in that respect and they wanted to leave something behind for posterity.

Harmony: Well your passion for this history of this man really shines through and I really look forward to encountering you in the Revolutionary City and meeting young Madison. I hope all of our listeners get a chance to meet you too.

Bryan, thank you so much for being here today.

Bryan: Thank you for having me.