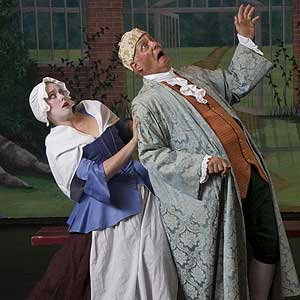 Onstage, bombastic actors bellowed. Backstage, privileged gentlemen roamed free. Enter David Garrick, the man who changed acting and reformed the theater. His innovations are with us yet, from footlights to scrims. Supervisor of Performing Arts Kevin Ernst tells the history.

Harmony Hunter: Hey, welcome to the podcast. I’m Harmony Hunter. Colonial Virginians loved the theater. It was a fondness they carried over from their home country of England where playwrights like Shakespeare and his contemporaries ruled the stage and the common imagination.

Shakespeare’s plays are still performed throughout the world and at Colonial Williamsburg. Their performance and production was profoundly influenced by one man, though it’s a name you’ve probably never heard. Supervisor of Performing Arts, Kevin Ernest, is our guest today. He’s stopped by to tell us about David Garrick, a man who in his own way made as lasting an impact on the stage as William Shakespeare. Kevin, thank you for being here today.

Kevin Ernst: Thanks for having me.

Harmony: Well, I want to start by saying that this topic today comes from a listener request, so listeners, if you’re out there, and there’s something you want to hear, write to us. It may be a while before we can get to the topic but we’re always glad for your suggestions.

Kevin: David Garrick, to the 18th century person, was considered probably the most important contemporary figure in the theater. In England he first rose to fame in the 1740s, and he was known for his acting style. He soon rose to fame playing roles like Richard III in some of the unlicensed theaters in London. Later, he became a contracted actor to the Drury Lane Theater.

Eventually he became so wealthy and famous, he was a co-owner of Drury Lane Theater, the prime actor, the lead actor. He was essentially a director of the plays that came up, though they didn’t technically have what we call directors in that time, and he also heavily influenced playwrights of his day and was a playwright himself.

In fact, of the afterpiece plays of that time Garrick wrote the top three plays that were staged in London as well as in America during that time. The three most popular ones were all Garrick-written.

Garrick was also, as I say, well known for his naturalistic acting style. Up until then there had been more of an artificial sort of bombastic style. An actor was almost a costumed orator who was reciting the lines of a poet. What Garrick did is, he brought a very natural, very authentic approach to acting. When his character was supposed to look terrified Garrick looked as though he was absolutely terrified. Whatever the passion was, Garrick went to great pains to recreate that authentic passion in his acting style.

This may seem less than surprising to modern audiences. Naturalism, you might say, is the sort of style that we expect today. In the 18th century, that had been quite different until Garrick rose to fame.

You find with Garrick that, as I say, he was well known as an actor, a playwright, a theater manager. He also brought a lot of innovations to the theaters of his time. There were, for example, great advances in lighting techniques. He actually traveled to the mainland of Europe and brought back a lot of new lighting techniques to the theaters of London. For example, he innovated a technology that actually allowed for lights to be dimmed on the stage; a greater degree of light to be thrown on the painted canvases. These were beautifully painted canvases painted by some of the best artists of the time and you can imagine how much more extravagant they would look if they were well lit so that audiences could actually see them.

Kevin: Absolutely. Now, some of the other things he did is, that he changed theater customs. There were certain prerogatives that audiences expected to have. For example, a gentlemen who would sit in the box seats, these are often minor nobles and such, they expected privileges like being able to walk about back stage both before, after, sometimes even during the play itself. Garrick was well known for removing that privilege so gentlemen were no longer allowed back stage.

He also created a bit of a theater riot on one occasion where he tried to end the custom of allowing for half price admission during the second act of the first play and you can imagine that some people were not very happy about this. He actually caused a riot, which greatly damaged his theater, Drury Lane Theater. These are the sort of things that people expected during that time.

Harmony: And what about his plays? Were his plays known to be well-received by critics? How was he as a writer?

Kevin: It’s interesting. I’d say that it’s sort of a love/hate relationship with Garrick. In his time he was extremely well regarded in most every way. Perhaps as a playwright that might have been his weakest point. That said, he was still very successful as one. Now I say that the critics maybe did not receive his plays as well, but he wasn’t writing very heavy plays. He was writing comedies, usually lighter comic pieces that were very successful.

His greatest innovation may be as a play writer and the realm of playwrights was in the adaptations that were being performed of older plays. Perhaps being an actor, he had great insight into what would play well with modern audiences, so he was considered masterful at both adapting plays himself as well collaborating with other playwrights who would adapt plays.

This would include the works of Shakespeare even. Even Shakespeare, who was considered the great playwright of England, even at that time, saw his plays adapted constantly. There were some very standard famous adaptations, for example, Colley Cibber’s adaptation of “Richard III,” incidentally which did not have the speech, “Now is the Winter of our Discontent.” That was actually stricken from the play and actually took a scene from another Shakespearean play where the old king is murdered by the Duke of Gloucester, Richard himself. They actually put that scene at the beginning of this play and it was seen as a better story perhaps and what can I say, sometimes a scene of violence doesn’t hurt in a play.

Harmony: Those plays are so sacred now. It’s amazing to picture them just being, you know, cut and pasted among themselves.

Harmony: Garrick’s plays, even thought they might not have been critically acclaimed, have some lasting impact. They are still performed here at Colonial Williamsburg. How does Garrick figure into the interpretation of theater that we’re offering to visitors here?

Kevin: Well, as I said many of Garrick’s after piece plays were the ones that were very successful in his time. Very often, as part of our 18th century play series, we choose an afterpiece play. An afterpiece is the second play that came at the end of an evening of theater. You actually had two plays: a five act main piece followed by a two to three act after piece play. Garrick’s plays, being shorter plays, they tend to fit well with modern audiences’ expectations. They usually last about and hour to an hour and a half.

They tend to be very well written. They have very complete stories and well drawn out characters and such, and they play well with modern audiences. And that’s one of the reasons that we often have chosen his plays. Plays like “Lethe,” or Aesop in the Shades,” “The Lying Valet,” or, “A Miss in Her Teens,” “The Irish Widow,” all these are plays that modern audiences enjoy, which happen to have also been very, very popular with audiences of the 18th century.

Harmony: It really says a lot about the man, that these plays, you can still enjoy them today.

Harmony: What was Garrick’s influence in Virginia?

Kevin: If nothing else, we know that Virginians were very much aware of Garrick, his greatness as an actor in London. If anything they looked to London as the center of their theater world and, for example, when people spoke of Patrick Henry as a great speaker we should have a quote from John Randolph of Roanoke he spoke of Patrick Henry as being “Shakespeare and Garrick combined.” So you can imagine he’s basically saying the worlds of Shakespeare and the voice of Garrick and the ability to compel listeners to listen to his words and to accept his message. I think that speaks volumes about how well they were both aware of Garrick and basically saying that their own great speaker, if they were going to compare him to one person or two people in this case, it would be Shakespeare and Garrick.

Harmony: It says a lot for all three men.

Kevin: No question at all. When you think of our modern sense of decorum when we go to the theater, if anything, Garrick was trying to reform audiences to become more respectful, to focus on what’s going on on the stage, to not be distracting. Certainly you see that.

Anyone who has been involved in theater as a performer or working backstage you know some of the golden rules of the theater. For example, no guests backstage during a performance. This was an innovation that ties directly to Garrick. Of course anyone who’s been involved in lighting techniques and such, Garrick was one of those who made these new forms of lighting the standard in London theaters. And of course with acting style, as well, really we thank Garrick in many ways for making naturalism the standard of his time and of course that filters down to later times.

And also the other thing which I spoke of a little bit earlier, his being in a sense one of the first directors of the stage. Up till his time you really don’t have a unified sense of vision for plays that are being staged. For example, actors often decided themselves what they would wear for costumes during the performance, the manner in which they would deliver their lines. Some actors were notorious in rehearsal for muttering their lines on the stage and walking through the movements -- some loosely agreed to blocking between the actors -- but then when they actually performed their performance often was as much surprising to the other actors on stage as it was to the audience.

Garrick, in his performance, at his theater, he insisted on a much more standardized approach, and he heavily influenced the actors who worked in his theater. Some found this a bit challenging, and you find many who criticized his approach, for it seemed to not allow for innovation among the actors themselves. If it was an imperfect system, perhaps it was because it was so very new. We have the benefit of 200 years of directors who’ve helped to refine our approaches to that sense.

Harmony: It’s such an interesting history and it’s entertaining as well and so I hope when guests come out here they’ll stop in and see some of these programs offered by the theater department and get to know a little bit more about popular culture and entertainment and how it effects our modern entertainment today when they visit us. So Kevin, thank you for being here today.