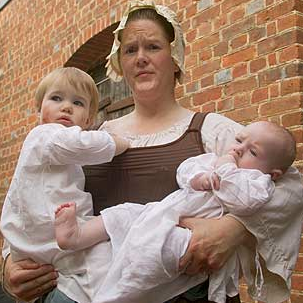 Historian Cathy Hellier describes the poignant histories of children left without parents. The question of providing for colonial orphans was split between the courts and the children’s caretakers. Listen this week to learn how colonial society looked after its littlest citizens.

Holly Brewer, By Birth or Consent: Children, Law, and the Anglo-American Revolution in Authority (Chapel Hill: University of North Carolina Press for the Omohundro Institute of Early American History and Culture, 2005).

William Waller Hening, The Statutes at Large, Being a Collection of all the Laws of Virginia, from the First Session of the Legislature in the Year 1619. Available as a searchable database at http://vagenweb.org/hening/.

Harmony Hunter: Hey, welcome to the podcast. I’m Harmony Hunter. Today we’re talking about how colonial society looked after its littlest citizens, and perhaps its most vulnerable citizens: orphans. A child who lost his parents in the 18th century had some grim prospects by today’s standards, but historian Cathy Hellier joins us today talk about the ways that the law and social expectations of children evolved together. Cathy, thank you for being back on the show.

Cathy Hellier: It’s a pleasure to be here.

Harmony: It’s always great to have you. You bring such a great perspective to some of these social issues and help us put things into context. What got you thinking about the topic of orphans in the 18th century? Where did your research begin?

Cathy: Well when I started here at Colonial Williamsburg I was working on a project called “The York County Project.” It was an NEH funded grant project that studied urbanization; Yorktown and Williamsburg and what the societies were like in those areas that produced those towns. So what we did for that was basically strip the county court records of information about all people. And I just kept noticing as I was reading the court records and so on how many orphans there were.

And then by the 1730s there were strictly orphan's courts in Williamsburg York County. That was the time, the August court, when guardians would bring in their accounts, their yearly accounts of the orphans' estates that they were administering, and these were fascinating accounts. They showed what was purchased for the orphan every year.

I found this really interesting, because it’s one of the few sources where you can see how children of various social levels were provided for. Everything from reams of paper for their schooling to dancing masters to college. So I found that whole process fascinating and what being an orphan was like.

Harmony: And let’s talk about what makes an orphan in the 18th century because it might be surprising to some people to know what the definition of an orphan is.

Cathy: Yes, the legal definition of an orphan was a child who lost his or her father and was under the age of 21.

Harmony: So oftentimes, if a child lost its father, the mother would not take care of the child. The child might be sent out in some way.

Cathy: Well, if the child had enough estate to maintain him or her, that is educate and provide for daily needs, often the child would stay with the mother at least until they were told enough to begin to learn to work and so on.

A lot of middling children, orphans and not orphans for example, were bound out or apprenticed in their early teens or so to learn a trade and prepare for adulthood. That was true for orphans or non-orphans, but where children had not enough estate, where their parents had not had sufficient means to provide for all of their children after death, then local government and the church took action and usually bound them out to some family to learn a trade or skills.

Harmony: And when we talk about being bound out to learn a trade, what are the general outlines of these apprenticeship agreements?

Cathy: In general, especially after the 1730s or '40s, in general these were agreements that, especially for boys, they would learn a trade. Some girls learned trades as well. Some girls learned the housewifely arts in order to maintain a home, but essentially the apprentice agrees not to gamble, to learn the trade, not to get married, agrees to certain provisions while the master agrees to educate the child in the trade, also to read and write, often to give them tools or clothing at the end of the apprenticeship time. And so that’s what the agreement is.

Humans being humans, sometimes these lapse, and it was the job of the county court to hear any complaints by the apprentices that they were either being abused or not being taught their trade. In that case the county court could make a determination to move the orphan or apprentice to another master or to determine that perhaps they had learned enough to end the apprenticeship.

Harmony: So the court actually tries to follow along with these orphans and make sure that they are being cared for in a way that’s acceptable, in that time. But these laws change over time. What sort of changes do you see happening in the law that keep pace with the changes in our thinking about what a childhood should be like?

Cathy: Well the laws changed for various reasons. The first changes in the law in Virginia began in the 17th century. Those changes were because people were being very lax about caring for orphans. They were wasting their estates, meaning that they were taking their estates for their own use. Or they were being profligate with them and not maintaining the orphan according to the value of the estate. That is, not educating them or providing for them properly, pocketing the difference, selling their cattle, things like this.

So from the 1740s on, Virginia begins to make laws to protect orphans from this sort of thing. As the laws go on, guardians have to post bond. They have to bring in yearly accounts. But interestingly, and they are also liable to oversight by the county court. As we mentioned, however, the country courts were fairly lax about providing this oversight.

And so the General Assembly, House of Burgesses and the Council that is, continued to pass laws into the 18th century to make the county courts more responsible for orphans' estates, and therefore they became personally liable in case there was waste of the estate eventually. And that actually seems to, for several decades before the American Revolution, actually help orphans and institutionalized orphan care in a way. The orphans' court became the place for orphans and guardians to do business with the county court in August every year and that became a pretty efficient system.

But the American Revolution changed a lot and the Enlightenment ideas changed a lot, religious ideas changed a lot, and we began to look at childhood differently in the sense that childhood became a time less of work and more a time to be sheltered and a time to grow and learn. And so, therefore, after the Revolution, we find a drop in the number of poor children who are apprenticed out -- at least white children. Interestingly, the number of black children, particularly black boys, free black children, not the enslaved, being bound out, rises. Probably because, again, a change in the law. It became easier to manumit slaves after the American Revolution for a time. Therefore, we had a larger free black population and it appears that white elites became concerned with social control.

The other change in the law, the abolition of entail and primogeniture, meant that more of the children in the family received more of the resources in the family. Therefore, that caused a drop in the number of orphans who didn’t have a sufficient estate to maintain them. So, we did have some changes; fewer children bound out. Children stayed with their mothers longer and the idea of social control is changing as well.

Harmony: When do we begin to see orphanages?

Cathy: Well orphanages begin to proliferate in the 19th century. There are a few in the 18th century. For instance, in the 1720s in New Orleans, an order of nuns begins an orphanage almost by accident because there is a large group of girls orphaned by an Indian attack. Their fathers were killed so they kind of take them in and have a sort of orphan house.

There were two orphanages in Georgia during the colonial period. One at Ebenezer, and one that was actually founded by the evangelist George Whitfield, in Bethesda. But for the most part, orphanages were not the general way that orphans were taken care of in the English colonies. Primarily it was through the courts, the family, binding out, the church, that sort of thing. What we’ve already described.

Now, the end of the 18th century and the 19th century begins to see a proliferation of orphanages. The first public one is in Charleston in 1790: the Charleston Orphan House. There are a lot of reasons for this. Orphanages were actually seen as a way for example of protecting orphans from evil influences, bringing them together and raising them. Often they were bound out from orphanages as they became old enough to learn trades, but it was seen as kind of a protective system where they weren’t living in the poor areas they had come from, for example. It was a like binding out. It was viewed as a way of breaking the cycle of poverty.

But there were other reasons that orphanages were considered as positive things, too. They provided structure and they felt the children needed structure and they didn’t often feel that poor families could provide that, for example. So orphanages become, really, along with other institutions as the United States begins to try to mature as a society, become legitimate as a country, they begin to develop more institutions and orphanages are among those.

Harmony: I feel like this looking at orphans, looking at this sort of little snapshot of society and of the law, it’s kind of revealing about 18th century history and colonial culture as a whole. What do you think we learn about colonial Virginia when we just look at the way it treats its orphans?

Cathy: I think one of the things that we learn about colonial Virginia is that people were very human and that’s one of the reasons we have laws, because people will generally take the easy way. They will generally try to enrich themselves if possible. And so we see that the legislature struggled with those issues and how to provide for those who were helpless when adults would not step up.

So I think we learn that history is messy, that people who were very good to their own families might not care very much about what happens to someone else, and that other people would care very much. It’s hard to make generalizations, but I think what we see happening through time in Virginia is that the legislature, in particular, became more and more vigilant about how to maintain children who didn’t have a complete care network.

Harmony: It’s a poignant topic, but one that is so interesting, nonetheless, just to see how this all is manifested in culture and in the law. Cathy, thank you so much for being here today and telling us a little bit about the life of the orphan in the 18th century.

Cathy: It was a pleasure to be here. Thank you.