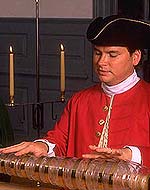 Harmony Hunter: Hi podcast listeners. The show comes to you this week from the Kimball Theatre. It's a great old building on Duke of Gloucester Street, and people have been coming here since the 1930s, when it was one of the first buildings in town that had air conditioning.

You can see all kinds of shows at the Kimball, from movies and film festivals to plays and orchestras. We're here today to bring you some sounds of the holiday season with Dean Shostak and the glass armonica, a really unusual instrument invented by Benjamin Franklin.

Dean Shostak: This is the glass armonica, invented by Benjamin Franklin in 1761. It's a really unusual-looking instrument, because it has some things you don't see in most other instruments. First of all, it's made out of glass. His idea was to make an instrument that you could play kind of like a keyboard instrument, but in a sense, he actually got the inspiration from watching somebody play the wineglasses that were standing upright.

Ben Franklin, always thinking about new ways to do things, got an idea that if you tuned glass bowls, you could actually mount them sideways, one inside each other, from the largest to the smallest. Then if they were rotating on this one spindle then you could actually just put your finger on the rim of the glass and get a sound.

Now the way I'm making the glasses move is, there's a flywheel at the end that kind of looks like an old spinning wheel, and I'm working that with my foot under the table. So when I get my fingers wet and when they're really clean, I can hold all of my fingers on the glasses and [plays tones.] It kind of sounds like an organ a little bit, because as long as you keep your fingers down on the glass, you get to hear more and more sound.

So that's one way you can use the armonica. The thing is that as the armonica started to become known, there were people who started making the right music for it and using it for other purposes. As it turns out, in Europe, since Ben Franklin was so famous, people were very excited about this instrument. So I thought it might be fun to hear a couple pieces actually written for the glass armonica.

The first one is by Johann Abraham Shulz, and he wrote this in 1799. It's a beautiful piece of music that he wrote after a whole life of writing vocal music. He decides to end his career by writing one piece for the glass armonica. And the other one is a composer from Germany named Karl Rollig, who wrote lots and lots of music for the armonica. He was a great player, too. So the second piece I'm going to play is a lot faster. In fact he wrote to play it "As fast as you feel comfortable playing it." So let's see how fast I feel comfortable playing it today.

The reason why I wanted to play the glass armonica more than anything else is that it was played right here in Williamsburg and I'm very proud to say I grew up here in town. If you had to ask me what instrument I think sounds most like an armonica should, it's this one right here.

I'd like to play as a tune that you may well have heard here in Williamsburg, because it was an old English carol from the 18th century that the organist from Bruton Parish Church would have known, Peter Pelham, and he was also our glass armonica player. I'm going to actually add one on to the back of that. It's a little bit later, but I think it kind of goes with it pretty well. The first one is the Coventry Carol, Lully, lullay. The second one is a Ukranian bell carol I'm sure you'll recognize.

[Carol of the Bells]

As popular as the glass armonica became, as it turns out, it was pretty short-lived. It was only around from about 1761 to 1830. After 1830 we don't see any more references to it. So there were many reasons why people stopped playing it. One is that it was so expensive. Each of the bowls on this instrument, for example, cost about $600, and there are 37 here. This is just the size of Ben Franklin's, so you get an idea of what the cost is today.

It was pretty similar in those dollars back then. That's what they would have to have spent. So we're now trying to reintroduce people to the sound of the glass armonica, and there are some really fun things you can do, especially at Christmastime. So here's a piece that I think really suits the armonica. I had to really work for this one, so I hope you like it. It's a pretty tricky piece.

[Dance of the Sugarplum Fairies]

Harmony: Learn more about shows at the Kimball at www.kimballtheater.com.

in Holidays, Music | No comments