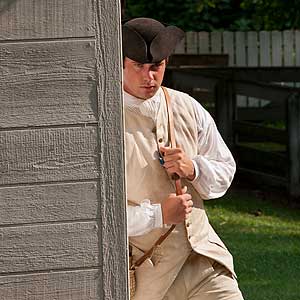 An onsite game embroils players in a Revolutionary spy’s world of danger, loyalty, codes and plots. “The Black Chambers” is game three in “RevQuest: Save the Revolution” series.

Learn more: RevQuest: Save the Revolution!

Harmony Hunter: Hey, welcome to the podcast. I’m Harmony Hunter. For kids, history can kind of be a dry subject, but my guest Lisa Fischer is part of a team that has found its way around that, embroiling kids and their parents in an on-site, on-line experience called RevQuest: Save the Revolution. It’s a series of games full of ciphers, codes, clues, agents, intrigues and spies that give these young players a sense of the dangers and the risks of unraveling war's secrets. Lisa, thank you for being here today.

Lisa Fischer: Thank you for having me.

Harmony: Well we’ve talked about RevQuest before on this show. Today we’re talking about where you are in its third year, kind of the things you’ve learned, the outline of the game and the current plot. Tell us about the game.

Lisa: Absolutely. RevQuest: Save the Revolution is a series of alternate reality games. We’re in our third game right now called RevQuest: The Black Chambers and each of the games is designed to be online, on-site, online. So you can begin your mission online. In each of the games you’re a spy and you’re given a mission that you have to help do something that will unravel a mystery and help to save the Revolution.

They begin online so you can begin playing the experience. You learn more about the story behind the game and then you can come on-site and continue your mission. You’ll visit sites. You’ll interact with people. You’re going to search the Historic Area for clues.

You will meet with a character. In this case of RevQuest: The Black Chambers you begin by seeing a video who you’ll be meeting a character called the Screenmaster, and then you’ll meet with somebody called the Sentinel who will send you on your mission. Throughout the course of your mission, you will be exploring different sites in the Revolutionary City, meeting with different characters, deciphering messages, all for helping to identify a threat to America.

Harmony: So some of the components of this game you’ve mentioned that they come and they’ll interview a person in costume; they’ll come up and ask them a question or get a clue. They’re also decoding things and using ciphers that are accurate to the 18th century, accurate to the Revolution. What are some of the codes and ciphers that they're getting to use to unravel this mystery?

Lisa: Well, for each of the games, yeah, they're all based on actual historical events and real people. So we try to bring in these accurate techniques and deciphering is one of them. So I don’t want to give too much away with RevQuest: The Black Chambers, but they use some different techniques this year, including something called the book cipher, which was a way of transmitting messages.

Everybody you were communicating with would have the same piece of written work and you could identify the code based on saying it’s something that appears on this page, this line, this number and so you could write an entire message, but everyone would have to have the exact same version. So we’re using that technique for one of the ciphers.

We’re using something called the wheel cipher, so that’s actually a device that you would rotate the letters and you would look at the line underneath and that would give you the message. So, these are all things that we knew were used during the Revolution. So we’re letting people actually try out how these different ways of corresponding secretly were used.

Harmony: And then, of course, I think the most modern aspect of it is that the way that you’re transmitting these clues back and forth is through text; through a device that we’re already all attached to and we can’t just say children only; adults also. You’re sending clues back and forth by text so it’s this amalgamation of the 18th century and the modern are coming together. How did that come about, wanting to try to bring our wireless devices into this experience?

Lisa: Well for so many people, that is their way of communicating. So especially for younger audiences we thought this would be a great way to have them participate in the game using something that they use every day. You know we see a lot of guests in the Revolutionary City with their devices in hand so if we can engage them in the on-site experience using what they already have in their pockets, you know, it’s a great way to sort of really be able to engage them in a new way.

Harmony: As I was researching for this story today I was reading about terms like “the Black Chambers, the Screenmaster.” There are plots about poisoning, and the Crossbones Club. All this stuff is so much fun. Who gets to write these stories? How is the research done? Are you reading something and you're like, “Oh, that’s cool, we should put that in RevQuest: Save the Revolution?”

Lisa: As I say, we have a team that works on the games each year so we have, you know, several people that focus on the research side. So we have an historian that really pulls together as we think about, "Well, what might be a good story?" And so then we do all of the research so that we know as much as we can about the historical events and the people involved so that, you know, as the games unfold you really are learning something about an actual person and real events.

And then there’s also the post-game website, so one of the ideas behind the game is that each of the sections, the on-line, on-site, on-line really reinforces what guests learn. So if you complete the on-line experience before you come, it will help you with your on-site, because you’re going to learn not only in terms of RevQuest: The Black Chambers, a little bit about the layout of Williamsburg, some of the different sites, but you will also be exposed to some of those different ciphering techniques that you will use when you come on-site.

Then for questors who complete the on-site experience, they get a password to unlock a secret part of the website that then will help them to learn more about the game as they experience it on-site. So they will learn what happens to the main person in the game and other people that they’ve encountered during the on-site experience. So, it’s really a way of not only helping guests to learn but to really contextualize each part of the game and help them to understand kind of what the whole experience was and the history behind it.

Harmony: That’s so important to do because you come home, your head's full of all kinds of things you learned, but it’s nice to have that bookend for your visit to kind of help you understand, you know, what was your part that you played.

to RevQuest: Save the Revolution. As part of our mission to teach people about not just as American citizenship as something that happened in the past, during the Revolution, but something that we still do today, that we do now. Talk about the game's mission of teaching people about what it is to be involved in the life of your community and the life of your country.

Lisa: As I say for each of the games we identify sort of learning goals and one of our primary learning goals is that citizenship requires action. You as a citizen really do need to be a participant in society. So this kind of experience where you are actually being called on to act is a great way to really enforce that. And, you know, that’s definitely applicable not only in the 18th century but in the 21st century society: that you really as a citizen do have certain obligations in terms of your actions and the things that you need to do to fulfill that.

Harmony: It just really gives meaning to those words when we talk about obligation and duty and citizenship. That, you know, that’s what it can mean.

Harmony: So people can come see it and anybody can participate in this game. With your ordinary Colonial Williamsburg admission pass, you can participate in the game, and of course we want you to participate on-line ahead of time and get prepared. So we want folks to begin this adventure online. What’s the website where they can start?

Lisa: The website is History.org/your-mission and so you can begin the game on-line. It's the exact same address for following up after you play the game as well. The address also appears on the game instructions that questors receive, so they’ll always have access to the website.

Harmony: It’s a great concept and so much work goes into it to make it accurate, to make it exciting and to make it a really high-quality experience. Its fun and you really do learn some valuable things. Congratulations on the success of the game. I hope you have a lot more seasons to come. Lisa, thank you for being here today.

Lisa: Thank you for having me.