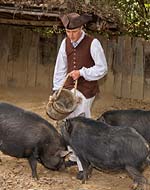 Harmony Hunter: Hi welcome to the podcast. I'm Harmony Hunter. Well, where would Virginia be without ham? The state is known for its hams today, and it's food that's been so important to us historically that pigs were one of the first things imported to the Virginia colony.

Here in Colonial Williamsburg a historic breed, the Ossabaw Island pig, is preserved at Great Hopes Plantation where they're just one piece of a whole living history plantation. Historic farmer Wayne Randolph is our guest today and he's spent a good deal of time getting to know these animals over the years.

Wayne, thank you for being back on the show today.

Wayne Randolph: You're welcome, glad to be here.

Harmony Hunter: Well, talk to me about these pigs you keep over at Great Hopes Plantation. They're not the modern pink pig we think of today.

Wayne Randolph: No. They have longer legs, they're very active, they have longer hair, longer snouts, prick ears. If we look at the evidence, the pictorial evidence for the 18th century and even later, for these kinds of woods hogs, they almost are depicted as large dogs. I say they look a lot like dogs on steroids.

They are very muscular and heavy-shouldered, but not round and low. They're very high up off the ground and that made them very active and able to move around and defend themselves naturally in their natural environment, which was the woods, and be very successful, produce a lot of meat quickly with hardly any effort.

Harmony Hunter: They have a thick fur coat.

Wayne Randolph: Well it's kind of bristly. It's very heavy hair. It's not real dense but it can be very bristly particularly along the back spine.

Harmony Hunter: So this is an 18th century breed of pig that preserving. Tell me about this pig in the 18th century.

Wayne Randolph: The type we have the Ossabaw Island, would have been on Ossabaw Island in the 18th century down in Georgia, off the coast of Georgia south of Savannah. It was living in a feral situation, which it did all the way up until the early decades of the 20th century. Therefore it was not improved and made with more qualities for the market, because it wasn't marketed.

It was not really a domestic pig. It had been, but it had been left on that island for so many years. The theory is [they were] deposited by the Spanish as they did on other islands including Bermuda, and so it was never improved.

It just sort of naturally evolved in its earlier form. So it might have gotten smaller as those populations tend to do but it also maintained its ability to survive under what we would think of as hostile conditions.

This is a breed that has adapted through centuries to be perfectly suited for the environment which it lives in. And that's one of the reasons why it looks so different from the pigs we think of today.

Harmony Hunter: Tell me about some of the specific traits of this pig that are adaptations to the area where it lives.

Wayne Randolph: It can drink salt-ish water and be fine. It can go for long periods of time without a food source. It has an ability to store fat during times when there is food on the island. And then when there is not, it lives off the fat.

It's perhaps one of the only ones that we know about that really does that. I'm not aware of others. Besides the fat storing, it's related to diabetes. They do have characteristics of non-insulin dependent diabetes. So they make great research animals and that's really probably their first interest today is in the research area.

Harmony Hunter: It's hard to think about pigs in the wild because we so often picture them in a pen, but actually in their habitat on Ossabaw Island they roam the woods, they're foragers?

Harmony Hunter: What do they eat?

Wayne Randolph: They eat about anything that is edible. Hogs are very food-focused and that's why they do what they do. They will eat a lot of nuts, we call mast: acorns, hickory nuts, chinquapins, other types of nuts, roots, small animals, insects, eggs. Anything that they can find by rooting around and searching for they will eat. They're omnivores, somewhat like us, and they'll eat a broad range of things that they find.

Harmony Hunter: In the 18th century life the pig is an extremely important animal. Tell me what the importance is of this as a food source.

Wayne Randolph: As I mentioned, it puts on muscle tissue very, very quickly and fat which of course we like fat then. So this is an animal that we invest very little in to get meat. It was, along with beef, the most common form of meat eaten in the colony.

Harmony Hunter: So would most families have kept pigs?

Harmony Hunter: So out at Great Hopes Plantation once a year we receive half a dozen pigs?

Wayne Randolph: There we are keeping between two and four animals and we have another location in Gloucester where we keep the others that make up the half dozen or so that are part of the butchering program in early December.

Harmony Hunter: So when visitors come out and see these pigs this spring and summer, they're going to come out to Great Hopes Plantation and see these animals, what are they going to see?

Wayne Randolph: They'll see a pen which we call a fattening pen where the pigs would have been rounded up from the woods, brought in to be fattened for a few weeks on corn at the very end and, before they were butchered. So that's what they'll see is them in their fattening pen.

Harmony Hunter: How do they behave? Do they sleep like cats or are they active? What are they like?

Wayne Randolph: They're active when there's food involved, very active. They would have been active when there was defense involved as well. But they might be seen sleeping out in the open, laying down, sleeping during the day. They'll take naps through the day and then they'll get up when I'm there, they'll run around. So we see them in all different types of activity.

Harmony Hunter: This is a rare breed and it's, it's not commonly seen and it's something that we sort of help to preserve here. What is the importance beyond creating sort of a living farmscape?

Now there are applications, the medical research field, specialty meat markets, and of course the historical replication use of these animals too. So we think that they are pretty important, as are other minor breeds for the future.

Harmony Hunter: Where can people come and see these animals?

Wayne Randolph: From about April on through the end of the year. Well, actually until the first of December they will be at Great Hopes Plantation: the only hogs in Williamsburg, and we think that they are worth seeing. They are great entertainment and I really enjoy working with them.

Harmony Hunter: Thank you so much for being here today.

Harmony Hunter: And if listeners would like to learn more about the preservation and salting of ham and pork, watch this week's vodcast.