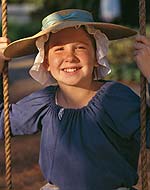 History is in the hands of Junior Interpreters all summer long, as the story of the Revolution expands to include a kid’s perspective. Pam Blount tells us how sites involve children in the 18th century and today.

Harmony Hunter: Hi, welcome to the podcast. I'm Harmony Hunter. Half of the fun of a visit to Colonial Williamsburg's Historic Area is meeting its colonial citizens. Walking down the street, you can have a conversation with an 18th century tradesperson, a founding father, a coachman, or a kid.

Pam Blount is supervisor of group interpretation at the Powell House, and she's our guest today in the studio. It's her job to get Colonial Williamsburg's junior interpreters prepared to tell story of the Revolution from a child's perspective. Pam, thank you for being here today.

Pam Blount: Thank you for having me.

Harmony: Tell me a little bit about the Junior Interpreter program. Can we just introduce that idea for people?

Pam: Absolutely. Junior Interpreters have been at Colonial Williamsburg for at least the past 20 years officially, and oftentimes, unofficially in other capacities before that. It is a group of students that are between the ages of 10 and 18. They work in various sites around the Historic Area.

We find that kids, when they come to Colonial Williamsburg, if they can see somebody their own age, their own height, their own size, and they're dressed in a colonial costume, they can relate so much better than if, say, they see myself in a costume, or an adult. They're much more approachable. So that's kind of how this all came about.

Harmony: Where can you find children interpreting colonial life in the Historic Area, in Colonial Williamsburg?

Pam: We've got so many sites that you're liable to run into children. The Geddy House and the Foundry at times has had Junior Interpreters. The Wythe House, you have the Colonial Nursery, the Powell House, Great Hopes Plantation, the museums hire also for Junior Interpreters. And let's see, I'm sure I'm leaving somebody out, the artificer there behind the magazine, he has a junior interpreter as well as Ed Schultz in the farming program. Foodways, as well.

Harmony: So this suggests that there are a lot of different facets of colonial life that can be interpreted. Kids from across the spectrum – from farming right up into trades. Let's go, start with where you're based: The Powell House. What kind of family is being represented there, and what kind of life are those children interpreting for guests?

Pam: The Benjamin Powell House is a complete hands-on site. So it is unique in that aspect, that everything in it can be touched, pulled out, sat down with, played with. We interpret the life of Benjamin and Annabelle Powell and their two daughters, Hannah and Nancy. So our children are trying to help teach our guests about the type of life Hannah and Nancy might have had if they had been living in that home in that time period.

Granted, it's a slice of life, but they learn a little bit about education, housewifery – which are essentially the same thing for a young woman – cooking, gardening, sewing, music, dance, art, and just leisure skills, as well. So they're going to be helping us teach that to our young guests.

Harmony: So Hannah and Nancy are the daughters that live at the Powell House. What does a day look like for them? What do they start doing in the morning and as the day progresses?

They learn about going out to work with the chickens or the pigeons, so the animals, we have those as well. The kids go out there and work with those. They will lead them in games, teaching them hoop and stick, or shut the box, or many, many other things. Ninepins, lawn bowls, all those sorts of things.

Harmony: And they would also have been learning to manage a household staff, or put more plainly, slaves.

Pam: Absolutely. And that kind of education comes when we have them working out in the kitchen with us. Because although we don't have any character interpreters or actor interpreters that are out there to portray slaves, I do have trained cooks and they work right alongside them. And that would have been the best place that a child would have learned, particularly a young lady. She would have been out there learning, because she would have had to have known how to run the household and manage the slaves, absolutely.

Harmony: So you can walk right into the Powell House in the middle of a day of life for the Powell family, and learn a lot about the society, the political situation at the time, the culture. That's an upper-middling class household. What other homes or situations can you walk into to learn about a different aspect of life, a different segment of society?

So you've got several different opportunities when you go to Great Hopes. They might be churning butter, or they might be helping out in the slave house, or the interpreter might be teaching about how to use the oxen. They may be harvesting or they may be planting, it all depends on what the season is dictating.

And that is what is most, I think, nifty, about both Great Hopes and the Powell House is that we run our programs seasonally. We run our programs time of day so that they're going to change to be appropriate to what's going on. So it might be something different every day they're out there.

Harmony: What is the biggest difference between daily life at the upper middling Powell House and Great Hopes Plantation? How is life most different for children that grew up in those two different situations: an upper middling house and a working plantation?

Farm kids may be working from morning till night. You know that the slave children are certainly doing that. If they're living in the plantation house, the bigger house if you will, they're certainly going to have a very similar life to what is being seen in the city, but Great Hopes Plantation is trying to show the average farmer. So you're going to see kids that are all going out and working and helping mom and dad.

There's always butter to churn, there's always some kind of things that need to be taken care of out there. As well as learning some of the slave games that have been brought over, some of the songs. There is still time for diversion as well, but a lot of good, hard work out there this time of year.

Harmony: Are tasks different for boys and girls at either house?

So yeah, will the boys know about household management? Not as much, although the girls may be the ones that will be paying the bills and balancing the books all to the young man's directions of course. So yeah, there will be different things.

Harmony: We've talked about two broad segments of society, the upper middling class household and the plantation household. Is there another one that's represented that people can visit?

Pam: You have the Wythe House, which is of course the home of George Wythe, who was a signer of the Declaration of Independence. Theirs is more of a political, if you will, interpretation. So you're learning about what it means to be a citizen, and what it meant to move forward with going from subject to citizen. So you're getting a little different, not necessarily a home view, but you're getting a political view in that site.

If you get over to the colonial nursery, or you go over to the artificer that is located in the magazine, they're actually learning the leather trade there and all the things that go along with that. They're getting that hands-on experience. Colonial nursery, they're teaching kids about how to grow things, guiding them in how to care for plants. So it is very very varied opportunity for our young folks.

Harmony: When you meet these kids, they're so impressive. Not only have they mastered the skills that they are performing every day, they can also tell you a lot about the history and the reasons why they would be doing the things that they are doing. What is it that a youth interpreter can do that an adult can't? What is special about the Junior Interpreter program and what that can bring to an interpretive site?

Pam: Personally, I believe that young kids and pre-teens, mom and dad say, "Come on, we're going to a museum." And what is the most common reaction? "Oh boy." I think that when they see somebody their age, and I know as well as my site and many other sites, I have interpreters from 11 up to 17, so I have a wide range.

I think when they see somebody their own age, it's just so much more comfortable, so much more personal for them. It brings it to a level that's more relevant for them. They feel much more comfortable. They'll ask some questions. Their uneasiness about how to operate in this world, the 18th century world, seems to melt away. I think that's just part of it, watching them bring the kids into it.

Harmony: Thank you so much for being our guest.