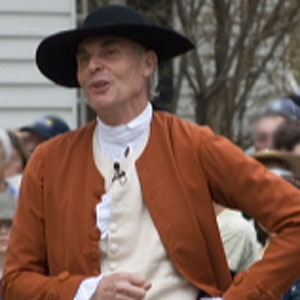 An ordinary tavern keeper makes the choice to side with the patriot cause, risking his livelihood and his reputation. Chris Allen portrays James Southall for Colonial Williamsburg.

Harmony Hunter: Hi, welcome to the podcast. I’m Harmony Hunter. The streets of Williamsburg’s Revolutionary City are populated by the everyday Americans who made their lives in the colonial capitol and found themselves in the middle of a war for independence. One such citizen is James Southall, the owner and proprietor of the Raleigh Tavern.

This ordinary traveler’s outpost was destined to play a major role in Williamsburg’s rebellion against the Crown. Our guest today is Chris Allen, who portrays James Southall at Colonial Williamsburg. Chris, thank you for being here today.

Chris Allen: Good morning Harmony. Thank you for having me.

Harmony: James Southall is an individual who we know from the historic record lived and worked in Williamsburg during the Revolution. What do we know about him? Who was he?

Chris: Well, James Southall is an interesting man. He started from humble beginnings and was born in 1726 out in Charles City County to the west of the city â€“ humble beginnings from a farming family. We know that he started to work in a tavern in Williamsburg pretty early on and was able to rent Weatherburn’s Tavern when that became available. Subsequently, he went on to purchase the Raleigh when Anthony Hay died. So that’s how he got into the Raleigh Tavern.

Chris: He was a fairly ordinary person. As I say he came from pretty humble beginnings. He bred eight children: five boys and three girls. He married Francis Jones from Warwick County to the other side of Williamsburg and lived pretty close to Williamsburg out on what they called Southall’s Quarter on the outskirts of town. He had 900 acres and had a farm there. He was able to supply himself, supply all the vegetables and meats and that for the tavern.

Harmony: So on the eve of the Revolution he’s just an ordinary businessman making a pretty good go of itâ€¦

Chris: Yes. He really is and he’s making a good business, doing particularly well for himself. Well respected.

Harmony: But he wasn’t political in the sense that we think of some of the founding fathers. He wasn’t ambitious as a Revolutionary.

Chris: No, certainly not. No way could you call him a political animal.

Chris: It starts really, if you really want to start at the beginning, and I think 1774 is synonymous with that because when the last Royal Governor, Lord Dunmore, dissolves the House of Burgesses, Peyton Randolph, the speaker, tells the people to go to the Raleigh Tavern to meet there. So it’s the largest meeting room there is in the city â€“ well more or less the largest meeting room â€“ and so the Burgesses go up to the Raleigh Tavern and they put their thoughts and ideas together before going to sit in Philadelphia for the first Continental Congress. So that’s how it all starts with James Southall.

Harmony: This is an occasion of some moment in Williamsburg, the scene you describeâ€¦

Harmony:â€¦It’s one that is actually interpreted here in Colonial Williamsburg. Basically the colonial body of lawmakers are ejected from the Capitol building from the building where they do businessâ€¦

Harmony:â€¦The royal governor kicks them out and says, “You are working against the Crown, this won’t stand.” And so they retire to the Raleigh Tavern and continue their business there. This government goes on. The first act, maybe not the first, but an open act of opposition to the Crown’s representativeâ€¦

Harmony:â€¦ and so James Southall finds himself the host to this treason.

Harmony: So does he have to make a choice at that point whether he’s going to kick them out himself and cover his own interests? He allows them to stay, obviously?

Chris: Well, he’s in business. That’s his living. He’s making a living from the tavern and so does he offend some people by doing so? Probably, yes. He probably does offend some of the true dyed in the wool loyalists. He might lose their business, but he decides that he’s going to go with the patriot cause, as such, if we can call it a patriot cause at that time and it certainly is the beginnings of it, and so he makes a decision to do so even if it does affect his business.

Harmony: What other sorts of choices does he make? Does he continue to allow groups to meet there? Does the Raleigh really become synonymous with the patriot cause?

Chris: Yes it does. The gentlemen still meet there. The Raleigh, you see, is in a marvelous position because it’s so close to the seat of government there that was the House of Burgesses and so those gentlemen are used to going there and it’s a place where everyone met.

Harmony: What was the role of the Raleigh Tavern during the war?

Chris: Southall was instrumental in boarding soldiers during the Revolutionary War period as a militia captain and a member of the Committee of Observation, served in a number of community positions and interestingly enough that in 1779 it was the site of the first observation of George Washington’s birthday and perhaps all of America. I think that’s fascinating.

Harmony: So it continues to be a meeting place through the Revolution?

Harmony: Now the types of people that are coming to Williamsburg and passing through the Raleigh Tavern, does that clientele â€“ does the meeting and the confluence of individuals happening at the Raleigh â€“ does that sort of heighten or inform some of the Revolutionary discussions that are happing at that time?

Chris: Well certainly some of the luminaries that were coming there were people like Thomas Jefferson, he takes supper there, there’s record of that, Washington, Richard Henry Lee, all those notable people because they were all very, very firmly for the cause of America. So those people would go in there, and of course when you have people like that going to your establishment, you become quite well thought of. So he becomes a well known patriot just purely by those people visiting.

Chris: Oh yes. And certainly, people come in from the other counties coming for the court sessions and coming to sit in the House of Burgesses you’d have all those types of people coming there.

Harmony: So what happens to James Southall through the Revolution and after the Revolution? What does the historic record tell us about his outcome?

Chris: Well, he becomes a member of the Committee of Safety in Williamsburg. Now the Committee of Safety, they would convene to make sure that people were abiding by the Continental Association, the non-importation agreement. Things were happening like people were told to be frugal, the Continental Association said there would be no more horse racing, no more cock fighting, no more gaming, people would not place bets wagering. All those things were happening and people in Williamsburg.

For instance, his neighbor was accused of hoarding salt. So James Southall, being a member of the Committee of Safety, was overseeing that sort of thing and inspecting people to see that they were abiding by the Continental Association. So that was his task as a member of the Committee of Safety which puts him on a much higher standing. He’s also a captain in the Williamsburg Militia, which was another rise in his rank if you will.

Harmony: That is so interesting. So he begins as an ordinary tavern operator, just a businessman. Not only does he allow the patriots to meet in his tavern, but he becomes very involved, very active in the revolutionary cause: the Committee of Safety, where he would police his peers. The Committee of Safety actually gets accused a few times of kind of overstepping their boundaries, getting a little carried away with their enforcement of patriot ideals and his involvement in the militia. Do you see a big change in the arc of James Southall’s political involvement in his community?

Chris: Yes. I think you’re correct. He has to stand up and be counted and indeed he’s doing so, but he’s being very clever because he’s keeping an even keel. One of the things that he does is, he’s trying to keep the prices stable. He’s trying to keep them as they’ve always been. He’s not, you know, he might be better off than some by the reason of his farm on the outskirts of town, he’s able to provide things and have vegetables and meats brought in so he’s still trying to keep an even keel. But at the same time, he’s showing people that if they don’t abide by the continental association and are not true patriots, he’s there to pull them up.

Harmony: So like many active people in the patriot cause, he’s inspired not only by the ideal of freedom from the crown, but he’s also motivated by his own personal interests and his wish to be able to continue to practice business in his community the way that he always has, and to maintain the economy that he’s thriving in. So he’s got kind of a two-fold motivation there.

Chris: Yes, it must be remembered that across the way is the Kings Arms Tavern with Mrs. Jane Vobe and of course they have been competitors for a long, long time. A little bit of professional jealousy and envy maybe and so she’s still there and so they’re vying for business across the street from one another and they’re still friends after all that happens and so they’re the two prominent taverns during the revolutionary period, they’re the two prominent taverns across from each other on the Duke of Gloucester Street.

Harmony: You’re portraying James Southall every day in the Revolutionary City and from your modern perspective put yourself in his shoes. How are you able to relate to this man and what do you find in common with James Southall and his actions that allows you to understand him better?

Chris: That’s an interesting question. Putting myself in his position now as someone who’s immigrated to this country. I often compare life with how it happened to me since I’ve been here and struggling to make an existence here and I think it relates sometimes to my character, especially some of the character’s I’ve portrayed, and James Southall in particular, he’s what we call a mover and shaker. He’s up and coming and he’s made his own existence and I think that’s what I’ve done. So I compare myself to him in that respect because, you know, it’s been a struggle and I’m still struggling.

Harmony: Chris this has been a great conversation. Thank you so much for being our guest today.

Chris: Oh it’s been my honor and privilege. Thank you Harmony.