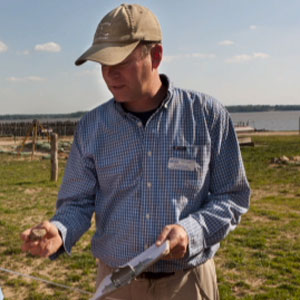 Evidence of blacksmiths and other tradespeople surfaces at James Fort. Archaeologist Dave Givens talks about seeing the fort populated with industry and trade.

Harmony Hunter: Hey, welcome to the podcast. I’m Harmony Hunter. When settlers landed at Jamestown in 1607, they brought with them everything they thought they’d need to set up an English outpost in the wilderness. This meant physical supplies like food and tools, but some of the cargo they carried was intellectual: trades. Our guest today is Senior Staff Archeologist Dave Givens. Dave, thank you for being here today.

Harmony: Well before we talk about the trades and the tradesmen that the settlers brought with them to Jamestown, I thought we could kind of refresh what the Jamestown Settlement is to Virginia history, just for folks that might not be as familiar with Jamestown as they are with Williamsburg.

Dave: Jamestown is the beginning of our nation. It’s our nation’s birthplace and it just happens to be on the island here in Williamsburg, Jamestown Island, and it’s been the center of attention archeologically and historically since our nation was founded. Throughout the 19th and 20th centuries it’s been celebrated as the nation’s birthplace: the 300th, 350th anniversary, most recently the 400th anniversary with the Queen and the President and all that.

But in just in the last 19 years it’s become the focus of archeology, which is the study of the artifacts of things that the humans have left behind. And so, as Dr. Kelso’s book states it’s the buried truth and so we’ve learned a lot over the past few years just from the artifacts.

Harmony: Jamestown has the distinction of being the first permanent English settlement so before there was a Williamsburg there was a Jamestown. This is where settlers first got a very tenuous hold on the New World and managed to stick. What I think is really exciting about Jamestown, and you’ve mentioned, is that archeology is ongoing. You are still discovering things that are telling us about those first months, those first years as English settlers tried to become a part of the American landscape and merged their culture with the Native American population that was already here. And part of your work is archeology at Jamestown. Talk to me about some of those digs that you do, ongoing at the site.

Dave: Well, on a daily basis Monday through Friday we’re out there excavating. And it’s really the discovery of the story, you know, the forensics of figuring what went on there. Because archeology, like I said, it’s a buried truth. When we’re digging in the ground we see the picture of the Virginia Indian, the Native American, the African Americans that arrived here from 1607 all the way up to 1699 when the capital is moved here to Williamsburg. And so that’s the big picture is that we’re finding out about our past not just finding things. So that, you know, on a daily basis we’re out there digging down, excavating and finding out that picture.

Harmony: What part are you excavating right now?

Dave: We’re in the center of the fort, and we’re working on a cellar that dates from about 1608-10 which is a fascinating two-year window into the fort, early fort life and it’s an unbelievable amount of artifacts and representation again of, for instance, Virginia Indians. The English dug cellars and wells and the Virgina Indian artifacts ended up in those holes, which is again a rare glimpse. The Virginia Indians didn’t necessarily dig holes in the ground. The tidewater is very wet and things get moldy, and so everything with their culture was above ground and corn cribs and things like that and so we had this unique view into the Virginia Indian past.

Harmony: How did the Virginia Indian artifacts get into those wells and cellars?

Dave: Well we now know, again, from the archeology that there were Virginia Indians living and working in the fort based on the artifacts we find. We find their tools. They use their traditional tools in the fort and they end up again falling in when they become disused so shell beads, bone needles, traditional stone tools.

Harmony: This gives us a nice segue to the tour that you’re here to talk about today which is a tour of Jamestown Island or James Fort that discusses or explores trades that were being practiced at Jamestown in the early settlement. One of the ones that you focus on is the blacksmith, so we know that the settlers came to Jamestown with the intention of finding precious metals so it follows that they brought some expertise with them.

Dave: Right, right. One of the chief things that you would, folks that you would need in the 17th century if you were setting up a colony was a blacksmith to repair the armor, to repair the horseshoes, make nails and things like that that were crucial to literally building a colony. So that’s one of the things we found evidence of, another cellar, and we’ve been working with the Colonial Williamsburg blacksmiths for nearly five years now on the pursuit of understanding how iron was made in the colonies. And a lot of the tools that we dig up they’re studying and so we’ve been working hand in hand in a very wonderful relationship in figuring all that out.

Harmony: You mentioned that nails are one of the things a blacksmith would make and I assume that’s one of the things you’re finding. What are some of the other artifacts and tools that you’re uncovering that you can associate with the blacksmith’s trade at Jamestown?

Dave: One of the things I learned recently was we actually have the tool that nails are made of. It’s a small almost anvil-like piece that has a hole in it and the blacksmith slides the nail rod through there and then hammers the head onto the nail. Shel Browder, the gentleman we’re working with on some of these tours and things like that that we’re doing, he actually was using the exact same one that we dug up, which was fascinating, it just hasn’t changed in 400 years. It’s the same, same type tool.

Harmony: So you mention that you’re learning how they made metal here in the colonies. How did they do that?

Dave: Well there’s local ore here. That’s one of the commodities that’s here in the new world is called limonite. It’s known to the locals as bog iron or commonly known as bog iron. It’s out on the beaches and you can go sort of pick it up, roast it, and then if you have a furnace you can actually make iron which we’ve demonstrated numerous times at Jamestown. So that’s sort of a lost art and they’re doing some essentially experimental archeology and building these furnaces and making iron right there in front of the public. It’s a very fascinating six-hour process, but you start with rocks you picked up on the beach and in six hours you have iron that could be made into nails, swords, hangers, all kinds of good stuff like that.

Harmony: What kind of furnace construction are they using?

Dave: They’re using a traditional style that’s used throughout Africa, Europe; it’s sort of a tower, it’s about two and half to three feet tall or so and you add charcoal and the bog iron in the top, and there’s a bellows that goes in the side and it constantly feeds oxygen into the furnace and the iron trickles down into the bottom and then is pulled out. In the end is a flaming ball of hot iron.

Harmony: So the blacksmith that came to make these iron, these nails and horseshoes and other necessities for the fort, is that all that he was here to do or would he also been assaying other metals that they were expecting to find?

Dave: No, there were assayers that that was, alchemist’s, that was their specialty and they do use crucibles and things like that that require a high level of heat to melt down, you know, looking for zinc and other things in the colonies, but yes, that’s a separate field.

Dave: Oh, absolutely, yeah. Like I said, the blacksmith is the, you know universal guy. Got to have a blacksmith to repair tools, make tools, adapt to the new environment and so we have found numerous blacksmith’s forges and things like that along the way, but yeah, that was something we expected to find.

Harmony: Where did you find it?

Dave: Recently we found evidence in a cellar and it was sort of in the center of the fort and how we came to find it was we found, as a blacksmith is hammering the metal you see scale and droplets; they’re almost microscopic, and we were able to pick those up with a magnet and took them to the Smithsonian where they did scanning electron microscopy and it was pretty clear that that was going on down in a cellar underground.

We wondered why, and our blacksmith provided the answer. There’s different types of iron, like steel has a different color when it’s being forged than iron and so they would want to see that so it’s a rather unique situation that arose out of those droplets.

Harmony: So they need almost a dark room to work in?

Harmony: Fascinating. I think once you start to people the fort with these different trades you begin to see a sort of living community that is a perspective you might not get without seeing those trades in there. Does bringing in the evidence of these trades allow you to see a different picture of the industry of the fort, of the purpose of the fort?

Dave: It certainly does. One of the biggest things is as we’re digging across the landscape it’s not just a horizontal approach where we’re digging down, but we record what goes on vertically, so we’re looking at the landscape and where these activities are going on inside the fort and the layout of the fortification. We’re trying to find out about Jamestown â€“ where the people are situated, where the industry was situated and over the past 19 years we’ve been slowly piecing that together.

Harmony: The picture continues to evolve, but it’s something that folks can go see. This is part of a tour that you offer and you mention that people can come see the dig in progress on the site. When can people come to Jamestown?

Dave: Well we’re open 7 days a week, 8:30-5:00 p.m., and the archeology goes on Monday through Friday. We have special events and the tour, like the blacksmith tour, the one we’re talking about today, you can get to through 1-800-HISTORY. It’s also available on www.historicjamestowne.org, but Monday through Friday, weather permitting, we’re out there digging.

Harmony: So if you’re here in Williamsburg for a visit definitely don’t miss Jamestown and Dave Given’s great tour. Dave, thank you for being here today.

Dave: Oh, absolutely. Thanks for having me.