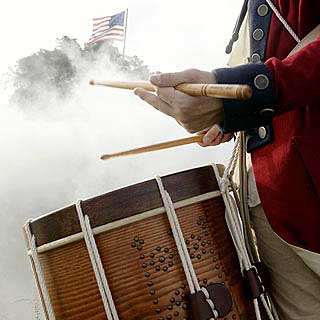 Members of the Senior Corps of the Colonial Williamsburg Fifes and Drums play the tunes that directed a soldier through his day, from morning’s first light to the night’s last ale.

Harmony Hunter: Hi, welcome to the podcast. I'm Harmony Hunter. We're coming to you from Colonial Williamsburg's Historic Area again this week, from an audience gathered to hear The Art of Fifing and Drumming. Listen now to hear the tunes that ordered the soldier’s day.

Amy Miller: For a company of 80 to 100 soldiers, one fifer and one drummer would be your means of communication to the soldiers, as well as possibly to the other side during a battle.

We have a number of duty calls that we use to communicate orders to the soldiers.They were short tunes that would have been played over and over again. We have duty calls for the encampment as well as the battlefield.

In the encampment, the fifer and drummer helped the soldiers to keep time, waking them up in the morning, telling them when it was curfew at night, and mealtime. In the battlefield, all of their drill commands had duty calls. We're demonstrating a duty call for the battlefield entitled "Cease Fire."

Amy: In the encampment, we have a duty call entitled "The Roast Beef of Old England." This was a meal call.

Amy: When you began to combine multiple companies together to form a regiment, the duty pair of field musicians from each company were taken and put into one large group of massed field music.

This group of massed field music could perform a number of ceremonies during the day for the soldiers, beginning with waking them up in the morning. That would be a reveille, and we have a British reveille entitled "First Camp."

Amy: Every day, the soldiers were put to attention and inspected by the commander for the condition of their uniforms, their weapons, and their personal grooming. During this inspection, the field music would provide some kind of arrangement of what we would consider more concert music.

Amy: This piece is also a good illustration of the advantage we have in numbers. When you mass the field music together, the fifers are able to play more than one part, so we have harmony in the fifers and we have added the bass drum to the percussion. That was a Janizary instrument, and it’s used to keep time for the entire group.

The trooping ceremony was a two-part ceremony. The first tune was a slow march, and during this march, the fifers and drummers would go past the soldiers, and a flag bearer would be carrying the flag or the standard. The slow tune is then followed by a fast march. We are going to play "St. Patrick's Day in the Morning."

Amy: The retreat ceremony signaled the end of the soldier's working day. At this point in the day, guns would be stacked, meals would be prepared, and passwords or paroles would be put into effect for those soldiers wishing to leave encampment for a few hours. We're going to play a retreat that came from an American manuscript entitled "Liberty, a Retreat."

David: Fifes down. Rest. At the very end of the day, a tattoo ceremony would have been played to signal lights out. Perhaps some of the soldiers have gone to a local village or city and are at the local tavern.

The fifers and drummers would go to the tavern. The word "tattoo" comes from the old Dutch phrase, " Doe den tap toe," or "turn the taps to." We're going to play a tattoo from a German collection entitled " Night Piece 15."

Harmony: Thanks for listening. We hope you’ll make a trip to come see the Fifes and Drums in person. Find us on the web at colonialwilliamsburg.com to plan your visit.