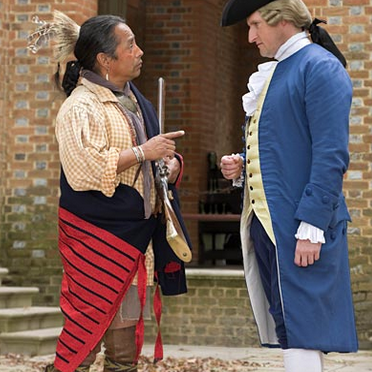 What were the types and tones of interactions among European settlers, native peoples, and Africans in colonial Virginia? American Indian Initiative Manager Buck Woodard sets the scene.

Harmony Hunter: Hi, welcome to the podcast. I’m Harmony Hunter. Native peoples were part of the Virginia landscape long before colonists stumbled on what they called the New World. But what was the interaction among native peoples, colonists and enslaved Africans? Manger of the American Indian Initiative, Buck Woodard, is here today to talk about how Virginia Indians adapted to the colonial presence. Buck, thanks for being here today.

Buck Woodard: Thanks for having me Harmony.

Harmony: Good to have you back.

Harmony: Buck, when we’re talking about the Native presence in colonial America, how do we refer to it? Do we say Native American, do we say Indian, what’s the correct way to refer to native peoples?

Buck: Excellent question. First of all, I would say that there is no one correct answer. It really depends on when, where and who we’re talking about. Native peoples first and foremost would today, in the present, would prefer to be identified by tribe. So if we’re talking about Cherokee peoples or Pamunkey peoples, or Shawnee peoples.

There are challenges with names. For instance, Virginia Indians in the 17th century Virginia is a very small place in terms of the English control even though they may see it as encompassing all of North America, but if we think in the colonial context of the 18th century where is Virginia and who is a Virginia Indian when Virginia stretches all the way to the Mississippi into the Ohio to the Great Lakes.

It’s always important to situate them historically and specifically. So when I say Virginia Indians we’re usually thinking about the 21st century 11 state-recognized tribes, but in the past Virginia’s native peoples included anyone who was within the geography of what was then thought of Virginia and doing business with the colonial capital of Williamsburg.

To their west, south a bit, there’s Iroquoian speaking peoples; Nottaways, Meherrins, Tuscarora. Farther west into the Piedmont you have Siouxan speaking communities. They would be the Saponi, the Tutelo or the Monacan. Then towards to mountains we encounter the Cherokee peoples who are also Iroquoian speakers of a very distant branch of the family and likely when we get past the mountains we could keep going all the way to the Mississippi’s and there folks that are speaking Algonquian languages like the Shawnee. So at the time of Jamestown though we tend to think of this Tidewater area as Virginia and as the frontier moves west English speaking people encounter new indigenous groups.

Harmony: So there’s a real diversity of presence here. It seems like there’s almost a tendency when we think about the history of native peoples, in this colonial period, that we think of them as a monoglot, that we think of them as just one presence. As you try to bring the diversity of that presence and the complexity of those stories to the history that we tell here in Williamsburg, how do you try to begin to bring that out and talk to people about the real complexity of this story and of this presence?

So one way that we tried to demonstrate that is by using the language in our interpretations as best we can as a way to set the stage for the visitor and set the stage for the guest. So if you hear me say Algonquian speakers or Iroquoian speakers it’s to reflect that there’s this diversity of language and thus diversity of culture and many different peoples represented by those language families. Even within one language family there’s different tribal communities.

So over the course of the last few years as we tried to develop the interpretation for Colonial Williamsburg we’ve selected stories that try to reflect different peoples within Indian countries. So we have a Shawnee narrative and they’re Algonquian people from the Ohio. We have a Cherokee storyline; those are folks from the mountains of Virginia and Carolina who are Iroquoian speakers. We do business with the Pamunkey who are just 25 miles from Williamsburg; Powhatan peoples; Algonquian speakers in the 17th century. So I think that’s one way into diversity is to think about language.

Harmony: We have a very strong representation here in Colonial Williamsburg. Now a lot of examples of the interactions among European people, colonists, and later bringing in the narratives of the African people that were brought here enslaved or later that became free Africans, how do we begin to bring in the stories of the native people who were also here and the interactions that happened? What was typical? What do we know from history about that presence?

Buck: Well we have our work cut out for us, because the Foundation as an institution, as a museum, has been producing public history for 70-some years. The African American storyline began in earnest probably 25 years ago, but was founded almost 30 years ago so they have a groundwork has been laid for interpreting both a European perspective and to some degree an African perspective. So we’re somewhat latecomers to this storyline and trying to insert the Native narrative into a story that’s already been constructed by Virginians and by Americans.

It’s a little challenging. It a form of decolonization, it’s a form of reversing understandings of how America was formed and how Virginia was formed and what peoples made up the past, but it’s not impossible.

Buck: It’s an exciting opportunity to really try to put back together bits of evidence that we have for native peoples in the 18th century. There are records. One just has to know where to look, what to look for.

You know, when Colonial Williamsburg, as an institution came together as a museum, many records were collected in Europe, different parts of the United States, and brought to, say, the Rockefeller Library here and our archives. But the researchers had attention for colonial Virginians, white Virginians, mostly male, later in time in the 20th century began to address issues of women, the lower class of African Americans, enslaved peoples, free Africans, and so more collections were accumulated and identified and sort of the “perspective” of those documents changed. People’s perspectives of those documents changed.

Native peoples are in those documents, native peoples are in those records. One just has to look for them and have attention to those stories and to look for the names and to look for the peoples. A couple of good examples that we have here in Williamsburg; the Brafferton Indian School for instance was up and running from the beginning of the century through the American Revolution. There are some records associated with the Brafferton that gives us the names of students, when they attended the school and with some additional research outside of the Historic Area we can connect some of those peoples with their home communities.

For instance, Montour is a name that appears in the records, and he’s likely related to the Delaware and the Seneca. Murphy’s another one that’s connected to the Cherokee. Langston and Sampston and Cook are connected to the Pamunkey. Squirrel to the Nansemond and Nottoway, so through some of the Anglicized and English names of the Indians who lived in town we can begin to look for them in other inventories and records and try to put together a story of what their life might have been like.

Those are good examples for everyday life of native peoples in Williamsburg. There are other cases where we have leaders that come over and over again through the course of their lifetime, so Attaculacula also called the little carpenter makes his visit to Williamsburg in the early 1730s as a 16 year old. He makes his last visit here in 1777 as a senior statesman and probably 10, 15 visits in between on official delegations to meet with the governor’s from the 1730s to when Patrick Henry is the Governor of the new state, no longer with the colony of Britain. So we can reconstruct and put together storylines of folks, because those that are known to history, Ataculacula is a known chief and known individual from Cherokee history that we can trace historically and reconstruct. So there a number of ways in which we can attack how to build a narrative and how to get a storyline together.

Harmony: And increasingly you can find these stories as part of the Revolutionary City here in Colonial Williamsburg. Where can people look to find some of these stories when they come and visit?

Buck: Well, we’ve been fortunate to have been working with three federal Shawnee communities in Oklahoma beginning in 2009 to put together a Shawnee storyline for Revolutionary City. So several times a year we have special programs that highlight the Shawnee presence in Williamsburg on the eve of the American Revolution, and then as the Revolution unfolds. So depending on when visitors come, for instance, if folks are going to be here around Easter this year we’ll have several weeks of Shawnee stories as a part of the Revolutionary City. You can meet four of these young men who came to live in Williamsburg during the winter of 1774, and then several of them that have to make tough choices in the Spring of 1775 when the Revolution breaks out â€“ whether to stay allied with the British or whether to make new agreements with the Virginians.

They can also look for special weekends like Cherokee Weekend that we’ll have later in the late spring, early summer where we have a special group come in from the Eastern band of Cherokees, maybe 20 individuals, and they’ll be in town in the middle of Market Square reproducing baskets and doing blow gun demonstrations and stick ball.

Sometimes we have evening dances and programs, but we’ve also been fortunate to attract some native talent that’s here on a more regular basis and so hopefully this spring visitors to Colonial Williamsburg will be able to catch Mr. Charles Murphy, who’s the interpreter for the Cherokee, possibly getting some fencing lessons on the Palace Green. Or we have an Indian trader program that’s on Thursdays where folks can visit with an Indian trader as he’s just come back from the frontier and running errands in town.

So there’s numerous, or multiple locations I should say where folks can try to be a part of the story.

Harmony: Buck, thank you so much for being here today. It’s always fascinating talking with you.