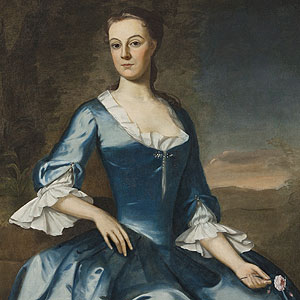 Painters and Paintings of the Early American South is a new exhibit focusing on the interrelatedness of Southern artists and subjects. See it at the Art Museums of Colonial Williamsburg.

Harmony Hunter: Hi, welcome to the podcast. I’m Harmony Hunter. Paintings and portraits can tell so much if you know what to look for. From the artist’s technique to the clothing and props pictured in the scene, a single portrait can encompass a life’s story. Curator Carolyn Weekley is here to talk about a new exhibit, “Painters and Paintings of the American South” and her book that is companion to the exhibit. Make plans now to see the exhibit which opens March 23, 2013. Carolyn, thank you for being here today.

Carolyn Weekley: Thank you for inviting me.

Harmony: Well, let’s talk about what this museum exhibit is. What are we going to see in this exhibit?

Carolyn: Well, we’re going to see a range of paintings and actually I should tell you that there are two exhibits planned, not just one. The first of these covers the period from about 1730 to 1790. The second exhibit will cover the earlier material from 1564 to about 1730.

So the exhibit that opens in March includes portraits, includes a few landscape paintings and a few other things, but primarily portraiture because that was essentially the primary type of painting that people commissioned in the early South. What we’ve tried to do is to be representative of different geographical areas in the South and different artists who either worked in the South or had clients in the South.

That’s one thing that’s a little bit different about this story in the sense that we’ve included material that was commissioned from artists abroad, from artists who may have worked outside of the South, but somewhere on the North American continent. Because all of those things combined, both the artists who work here, the artists who didn’t work here made for a better understanding of what the artistic heritage is of the South. You need to see it all, all those different ranges of things.

Harmony: You mentioned that portraiture is the primary form of art in the early American South. Why are portraits such a big part of the decorating culture at that time? What place do portraits hold? What do they tell about the household?

Carolyn: Well that’s kind of an involved question because there’s no simple, really, simple answer. Some people see portraiture as status symbols and so forth. Others see them as paintings that are really documents of people, like photographs are today, in the sense that a family might have all of its portraits done at one time: the children and the parents and so forth and so on. Family relationships were, I think, probably a little different early on than they are now in the sense that there weren’t as many people in this country. The family as a unit was probably much more important and so family ties, historically, were more important. Having some sense of one’s ancestry was important, particularly for people who had only been here for a couple of generations.

Harmony: In your book you call them “Something more than just decorations,” these portraits.

Carolyn: Yeah, they were. And there are several references to paintings being used as sort of reminders of one’s friends or relatives or whatever in the sense that people would exchange portraits. Someone in England may send a portrait over to someone in Maryland and someone in Maryland would send their portrait in turn over to England. There are several cases of that happening in the South. The mention of that kind of thing is very rare of those incidences very rare, but I suspect it went on much more frequently than we know.

William Byrd for instance, although he and his collection are not featured in this first show, he’s a good example of this kind of thing in the sense that he had a fairly large collection of portraiture at Westover. Many of those people were his friends as well as his relatives, but his friends were people that he knew in England who obviously he couldn’t see every day but he had their portraits. In one case, I recall that he wrote a letter to someone who is featured in this portrait saying that it brought back fond memories of being with this person so certainly they served that kind of purpose of reminding one of friendships, of documenting friendships too.

Harmony: When we look at portraits we see so much more than an image of an individual. There’s so much more meaning embedded in the whole scene. What are some of the other things that you can learn to notice in a portrait that make it almost like a mini-biography of the person who’s sitting for that portrait?

Sometimes in children’s portraits you will see playthings that suggest the kinds of playthings that were used during the period. They may not be the exact ones that the child owned who is featured in that portrait. One of the things that you quickly learn about, particularly early portraiture, is that many of the settings that you see, the costumes, the accoutrements that are in those portraits were often borrowed from print sources or other types of art that the artist or the sitter may have seen. They felt that those things were fashionable, that they were typical of the kind of life either they had or they wished they had. So you have to be careful in reading too much into a lot of things that you see in very early portraiture.

Harmony: So a middle-class woman sitting for a portrait might say, “Paint me some of those beautiful lace elbow ruffs that I saw in the portrait of the queen?”

Carolyn: Right. I mean, and yeah, we certainly know that those things existed in costuming, but to what extent they existed in every household was another question. I mean I know of Southern portraits where the costuming is derived directly from a print source and it includes a lot of lace, a lot of gold threading and so forth and so on. I know of other paintings, for instance a portrait of a child from South Carolina, where he has lace cuffs and he has lace tied to his neck and those things were said to have been made by one of his ancestors. So they do appear to be a little different than some of the other wrist decoration in some of the other children’s portraits by the same artist so maybe they were, maybe they were made by an ancestor. I don’t know.

Carolyn: That they come in all shapes and sizes, that they have different backgrounds, they have different skill levels, their training is often very different and all of those things often can be seen in the paintings. I mean you have a suspicion that, for instance, an artist was trained as a trades painter, that he may have had his training in a shop that did heraldic painting or coach painting and sign painting, decorative painting and he added portraiture to his or her repertoire as another way of making a living.

In other cases you know that the artist trained abroad in a studio, such as Benjamin West’s studio, in which case this particular artist has a very different and more learned approach to doing a painting than did the one who trained with the heraldic painter for instance. It also makes a difference of whether they were trained abroad or trained here, because we didn’t have a guild system in America. There was a guild system in London, for instance, where different types of painters belonged to different companies and whatever company you belonged to, that’s the kind of thing you learned. If you were going to be a portrait painter exclusively, then you had to sort of move up through the ranks and eventually align yourself with an artist’s studio and take lessons at the academy for instance. It’s varied.

Harmony: This exhibit focuses on the painters and paintings of the American South as we’ve said. What happens when you narrow your lens to focus on just this piece of Southern painting? Do you learn something specific about the South? Are there traits that are specific to the South?

Carolyn: There are, I think probably, few characteristics that you can say are Southern. Many of the artists who worked in the South also worked elsewhere in this country or they worked abroad. Many of the artists abroad who had commissions from Southerners also had commissions from other people in this country and from other people in England, wherever. So that trying to point to any sort of set of artistic characteristics that are particularly Southern is very, very difficult.

Harmony: So what is the reason for focusing on painters and paintings of the American South?

Carolyn: My reason was pretty simple. We’ve had lots of studies of individual artists who are featured in this book, but there has been no major study of all these artists together so that you could see the whole picture of what the Southern art landscape was like in the early years. That really was my primary reason for doing it and it’s that simple. So, it’s in that context that a lot of the relationships between artists and sitters become more apparent.

Harmony: This exhibit is special in a couple of ways. It involves a lot of pieces that are loan from other museums; a large sort of inter-museum collaboration. What does that collaboration allow us to show visitors to the museum exhibit?

Carolyn: It allows us to show a number of things that we wouldn’t be seeing otherwise from other areas, particularly South Carolina, there’s some things from Maryland and there’s some really key pictures that coming to us on loan which we would not ordinarily see. For instance, there’s a portrait of Adams by John Singleton Copley of him when he was released from prison right after the Revolutionary War which is just, I mean it’s just an incredible painting. It’s owned by the National Portrait Gallery and we are just real fortunate to have it.

There’s some South Carolina paintings that are coming that are just outstanding and one of the great things that happens when you bring all this material together is that it provides a very rich picture of the artistic heritage as a toto of the south and that’s exactly what we’re trying to do, is we’re trying to give people an idea of how sophisticated the art climate was, particularly in the 18th century in the South.

Harmony: Well I’m looking forward to seeing this exhibit and I hope that all our guests get to come see it. The exhibit opens March 23 and before that time you can find Carolyn Weekley’s book, “Painters and Paintings of the American South,” which should be published around March 18. Carolyn, thank you for being here today.