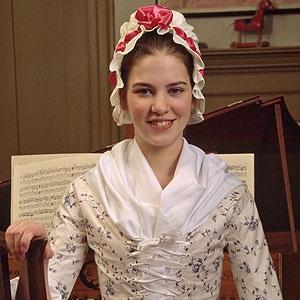 A 130-year span of keyboard instruments documents a revolution in colonists’ musical tastes. See the progression in “Changing Keys,” a new exhibit at the Museums of Colonial Williamsburg. Curator John Watson describes the outlay.

Harmony Hunter: Hi, welcome to the podcast. I’m Harmony Hunter. Music was a part of everyday life for accomplished colonial Americans. As the nation grew and changed, so did their instruments. Curator John Watson is our guest today and here’s to talk about the evolution of keyboard instruments in the museum exhibit “Changing Keys.” John, thank you for being here today.

John Watson: Glad to be here.

John: The exhibit opens with a spinet from 1700s, 1700 a nice round number that’s the opening date for the time range that we’re interested in, and it continues through 1830. Actually there’s an 1831 instrument. The beginning date of 1700 is a pretty good starting date for us because keyboard musical instruments would have been exceedingly rare before that. It’s a good time to actually start expecting to find keyboard instruments in America.

The Â 1830 end date is a good ending date because at that point the piano, which was far and away the most common keyboard instrument around, was on the verge of a technological change that brought in an iron frame and heavier strings and much heavier construction. So after 1830 the modern piano very quickly developed just in a few years so that by the middle of the 19th century virtually the modern piano had developed.

Harmony: So it’s kind of rare now to find a piano in a home or musical instrument in a home, but that was very different in the 18th century. Harpsichords and spinets, musical instruments were much more a part of daily life. Can we talk about how our culture has kind of changed?

John: Yes. You know today we expect to hear music almost all day. We carry music with us on our MP3 players, we listen to the radio, we hear it constantly. In the 18th century, obviously, they didn’t have all of that technology and they didn’t have that opportunity to hear music as much except by their own making: their own musical playing instruments and singing and so forth. We think that they probably did a great deal more than, certainly more than we do today. They loved music as much as we do, but they had to make it themselves.

Harmony: And more than entertainment, it was an accomplishment. Do we look at keyboard instruments as something that were a particular accomplishment for a lady to have?

John: That was really important in the period of our main interest. In the 18th century a family of the gentry class considered that certain accomplishments were the marks of a refined, especially young lady, and that included things like needle work, playing a musical instrument of which the leading contenders were keyboard instrument or the guitar, the English guitar. But musical instruments, keyboard instruments were a very important part of the refinement of, especially, young ladies.

Harmony: In this exhibit, we see not only many different examples of keyboard instruments, but what you term in the exhibit, “A revolution in taste.” As you look at this span of time and span of instruments what are some of the big changes or big fashions you see rolling through this?

John: There were some huge revolutions that took place in musical instruments over this period. One of them, certainly, was the change from harpsichords, which get their sound by plucking the string to pianos that get their sound by striking the string. And going along with that was change in taste from music in which, as in a harpsichord where you have several stops you can change the volume by changing stops from time to time creating a dynamic level, a loudness level that stayed at one level for a while, adding a stop changed it to a louder level for a while, and so forth. We call that terraced dynamics. But in a piano, you can gradually crescendo and gradually decrescendo which was a completely different musical aesthetic so that was one revolution.

Another revolution comes from the fact that London was the source of musical instruments throughout the 18th century. You might like to think that after the American Revolution we were, we suddenly started to make our own instruments and purchase instruments from American makers, but in fact that revolution didn’t really occur. That is, independence from London as the source of musical instruments didn’t really occur until the early 19th century. There were a number of embargos leading up especially to the War of 1812 that kept us from trading with England, and that’s finally about the time â€“ that is in the first decade of the 19th century â€“ that the American keyboard instrument makers had reached a level that they could supply the demand. So after about 1815-1820 the vast majority of instruments finally started coming from American makers and not London. So that was a different kind of revolution.

John: Yes, during the early part of the 18th century spinets were most common. It’s a type of small harpsichord, and they were very often of solid walnut. Then the harpsichord came along or became more common in the mid-18th century, and it was always veneered. The reason for that is that the best wood for making a harpsichord is oak. In England it was oak that was used and oak really doesn’t look very fancy as a cabinet wood so they clothed the instrument with veneers; fancy veneers in mahogany or walnut.

Then in the late 18th century square pianos became very, very popular. This is a rectangular type of piano and it had sometimes very decorative furniture detailing. That changed quite rapidly over the rest of its history as taste in furniture styles and veneer patterns and so forth changed. Pianos were status symbols and they were meant to look pretty in the house and so they changed their looks as tastes changed.

Harmony: And what about the sound that people want? As new composers come along, do people start to want an instrument that can produce a different type of sound or a different level of sound?

John: That was another big change that occurred during the course of the 18th century from harpsichord to pianos we already spoke about the ability of pianos to crescendo and decrescendo change its dynamics just in the way you played the keys. That was a big change.

Another change that occurred is in the kinds of, you might say, the bells and whistles that keyboard instrument makers added to the instruments. In the beginning you just had one set of strings, play a key, and just one string is plucked in a spinet. Then harpsichords started adding other sets of strings so that you can, depending on what stops you have on, you can play one, two or three strings per note. Then the piano, the earliest pianos, had hand stops that created different kinds of sounds.

Then the last instrument we have in the exhibit was made 1831, and that one actually has four pedals which creates not only a damper pedal, as in the modern piano, but also a bassoon stop which brings a roll of paper up against the strings and causes a humorous buzzing sound. One of the pedals is also a drum and bell which is used for the very popular battle music. There were many battle pieces that were written in that period and it would be useful for a cannon fire and all sorts of other special effects.

Harmony: This is such a fun exhibit because you get to see so many examples of keyboard instruments, the same sort of type of thing. How many instruments are in this exhibit?

John: There are 28 keyboard instruments that include spinets, harpsichords, one organ and square pianos and grand pianos.

Harmony: And they’re all just visually works of art. How does the museum go about compiling a collection like this? How do you find these different instruments and bring them together?

John: As in all of our collections here at Colonial Williamsburg, our first objective is to collect the kinds of objects that were known in 18th century and early 19th century Virginia. That was our goal from the beginning with this collection, but it was perhaps a happy accident that the whole series of music specialists â€“ advisors and staff people over the course of Colonial Williamsburg’s history since the 1930s â€“ happen to be keyboard specialists. That means that our keyboard collection was particularly strong from the beginning and now is the strongest part of our musical instrument collection. We have a keyboard instrument collection that’s one of the best in the country.

Harmony: Now not only do you see these instruments, but there is a special multimedia aspect in this exhibit where you get to hear a sample of the exact instrument you’re looking at being played. Why was it important for you to bring the sound of the instrument into this exhibit experience?

John: The museum is full of objects and always has been, but they’re objects intended to be a sensory experience for the eye. But musical instruments actually exist for the eye and the ear. How can we bring that to life for people? That’s one of the important aspects of this exhibit that’s different from most of the others, so we’ve managed that in several ways.

Harmony: When you hear from the musicians that put on these concerts and play these antique instruments, what do they tell you is the experience of putting their fingers on these antique keyboards versus maybe just playing a reconstructed instrument? What’s it like to play the real article?

John: There’s something really special about playing a historic instrument and I suppose it might be similar to the difference between seeing a reproduction of the Mona Lisa and actually going to Paris and seeing the original. It’s something that one just feels when they’re standing in the presence of something from the past. It’s a connection with the past that’s really quite remarkable.

Musicians also talk about the way the instrument tells them about the music that they normally play on modern instruments or on reproductions. It’s, again, it’s a connection. It’s stepping into the landscape of the 18the century and experiencing the music on the very instrument that was used by people in that period.

Harmony: This exhibit is live now. You can go see it now in the DeWitt Wallace Gallery, part of the Museums of Colonial Williamsburg. How long is this exhibit open?

John: We expect the exhibit to be open at least for two years, possibly longer.

Harmony: John, thank you so much for being our guest today and we hope everybody gets by to see this remarkable exhibit.

John: Thank you very much. Come ahead.