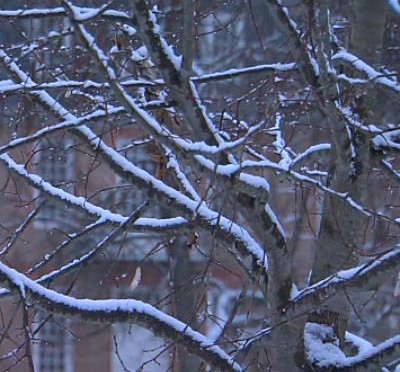 The heart of Christmas remains unchanged, even as each generation lends new customs to the celebration. Historian Lou Powers talks Christmastide in three centuries.

Harmony Hunter: Hi, welcome to the podcast, I'm Harmony Hunter. Christmas is a holiday ripe with traditions that are older than America itself. The first colonial Christmastide celebrations looked very much like English ones. As time passed and a melting pot of new cultures shared their customs, the modern Christmas was born.

Here with me now is our resident Christmastide expert, historian Lou Powers, to talk to us about the evolution of Christmas in America. Lou, thanks for being with us today.

Lou Powers: Season's greetings to you!

Harmony: Well, let's talk first about the first Christmas celebrations that happened in the colonies. What do those traditions look like?

Lou: Well as you might gather, a lot simpler than we do it these days. Attendance at church, everyone tried to have more and better things to eat and drink, and because of the season -- such long, dark nights -- gatherings around the fire candles played an especial part, conversation, music, dances when possible when there was enough population density.

Harmony: Now Christmas was more than just a single day, it was 12 days.

Harmony: What would Christmas have looked like in a gentry household in the 18th century?

Lou: Christmas day itself is spent going to church. People enjoyed going to church even if they weren't terribly religious because it's such a great gathering time to socialize, to catch up on the news, to even conduct business. Then, if you're talking about gentry in Virginia, there would be a nice meal afterward. Perhaps some neighbors would come over for the afternoon meal.

Seasonal foods at that time, of course the ubiquitous Virginia ham has to be a part of the table. Turkeys were already popular and they are a native bird of course. Lots of seafood and fish available at this time of year, but a little skimpy on the vegetables and fruit, I'm afraid. Pickled vegetables of some kinds and preserved fruits. As many imported wines as your pocket would allow you to bring: Madeira, claret, and so on and a big punch bowl.

Then you would have mincemeat pies and that sort of thing. The mincemeat was actually made with beef, and plenty of suet, not the almost vegetarian things we think of now, but actually mincemeat pies. So a lot of the seasonal foods are the same for us today as they were in gentry houses.

Harmony: We talked about celebrations of Christmas in a gentry household. What did it look like for their servants? What was happening in the kitchens and servant's quarters at Christmastide?

Lou: That of course will depend upon the master, and the religious beliefs of both the master and the individual servants and slaves. For those who were Christian, church attendance was probably allowed or even encouraged around the household duties that had to go on. Naturally if there are guests coming for a large meal right after church, a lot of things have to be done last-minute or long ahead of time. So they were quite busy in preparing foods of all sorts in hearths and a series of small fires on the hearth to deal with the various elements: sauces, desserts and so on. So, very busy around there.

And it's the one time of year when household servants were not as well treated as field hands. We know that field hands -- slaves of course -- often had three to five days off at Christmastime. This was not possible when people were entertaining and needed their servants and slaves to make that happen with meals; the cooking and cleaning that needed to go on. So we know at other seasons that household servants were sort of made a deal with: if you'll work over Christmas, we'll give you three to five days off at another time.

Harmony: Were slaves allowed the opportunity to visit with their families in the season?

Lou: With three to five days off, that certainly might be possible. Traveling on foot from one plantation to another, or out of Williamsburg to some of the outlying farms and plantations would certainly be allowed. And that's what any slave would want to do: to be with family, regardless of religious beliefs and whether it has to do with the season or not. You want to be back with your closest family members or friends at a time away from work.

Harmony: What gift-giving customs are we seeing in both the gentry and in the servant class?

Lou: There are very different ideas about gift-giving early on. Gifts are always, in the 18th century, gifts were always given from the superior to the inferior. So that a parent would give a small token to a child, something like, let's say a pair of gloves or an educational improving, as they said, improving little book to a young child to help them read and learn morals and so on. And a master might give a coin or some cup of rum or a pound of sugar to a slave at this time. But there's no exchange of gifts like we think of now. These are always from superiors to inferiors.

Lou: Well there weren't many goods coming in, as you know, so there was certainly a shortage then of all imported items. We know about the problems with tea. Also affected of course are spices, sugar, alcohol of all kinds -- anything that's not made locally. Christmases were very sparse.

This was a country that was hard pressed to mobilize quickly enough for this huge undertaking of fighting the western world's most professional army. So it was very difficult. Think too, that we had during the colonial period been required to send all the raw goods back to England where the manufacturing went on. We had very little in the way of manufacturing. We had a bit of a supply of lead and some iron, but we had to really, really concentrate on getting those necessary items.

In addition, ammunition, gunpowder, and uniforms and tents and shoes for all the soldiers. It was a huge undertaking and had to go far. That surpassed any needs of holiday celebrations then. So one might have still the religious convictions in one's heart, but outward manifestations must have been really, really sparse.

Harmony: When is the first Christmas tree seen in Virginia?

Lou: Well I couldn't really tell you when in Virginia. Remember there is a large German settlement in the valley of Virginia, even in the 18th century. We know, of course, that Christmas trees are a German tradition of long standing. The first we know of in Williamsburg is 1842 at the St. George Tucker House.

This comes about because one of his colleagues, a professor at the College of William and Mary, Dr. Minnegerode, was here alone and invited to the Tuckers for Christmas Eve, and a huge of band of children was there to celebrate the holiday. Dr. Minnegerode wanted to introduce this German custom to Virginians, to Williamsburgers.

He cut down a small evergreen, put it on a table, cut out some colored paper ornaments and clipped on some small candles and made quite an impression on that group of children. In fact, we know about this because in the 1920s, one of those children, who by that time 95 years old, remembered it so well. She told us about the first Christmas tree here in Williamsburg at the St. George Tucker House.

Lou: The wonderful, elaborate decorations on the doors started in the 1930s here in Colonial Williamsburg, as an adaptation of much earlier decorations not at all associated with Christmas. They were thought to look more 18th-century than a plain old green wreath with a red bow, which is what people were putting up on their doors. And in the Historic Area it didn't quite look right.

So the Foundation decided to adapt these other designs not having to do with Christmas to use at Christmastime in the Historic Area that would never be done in the 18th century. Hanging fruit on your door? Squirrels are bad enough now eating up those apples and other fruits, but horses and slaves and apprentice boys would have certainly taken care of them in the 18th century. You wouldn't consider hanging a pineapple outside.

Harmony: We've talked about the evolution of Christmas celebrations from their earliest appearance in Virginia up to almost the present day, in the 1930s. When you reflect on that sort of continuum of celebration, what do you think is the common thread between all of those celebrations that are happening?

Lou: Gathering family together of course is very strong. We've naturally mentioned the religious motivation for this feast of the nativity. Gathering together, celebrating that, celebrating the institution of family, if you will. And you've got to have some good food and drink to go along with that, whatever your pocket will allow you to provide.

I would also say that one of the, if not the most, prevalent customs in my opinion for Christmastime is adaptation. We're always adapting from a magazine, from a friend's way of celebrating. I've noticed this for years. I've been thinking about Christmas and the history of Christmas for decades, and I think that may be the most prevalent custom we have.

in Holidays, Research and Publications | No comments