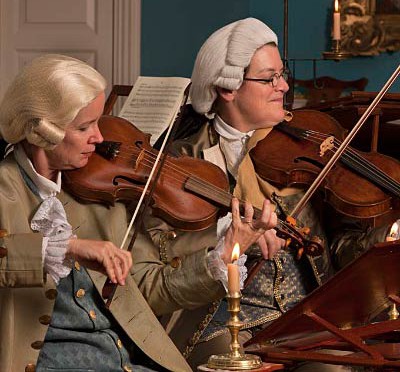 Learn more: Audio slideshow of a Palace concert Music programs to see during your visit. Christmas Music in Colonial Days.

Harmony: Tell us a little bit about this group and your part in it.

Jane: This group has been in existence for quite some time. We not only play in the daytime doing programming here in the Foundation in various different locations, but evening programs as well, primarily at the Governor’s Palace, doing a concert there. But at this time of the year, we’re also together performing at the Capitol as well on Sunday nights during the holiday season.

Harmony: Well let’s meet some of the other musicians, and tell us about your instruments. Let’s start with Herb Watson. Thanks for coming today.

Herb Watson: Well thank you, Harmony. My name is Herb Watson, and I am the flute player. But the flute I play, even though it’s a direct ancestor of our metal flute that we have today, held to the side and sometimes called a transverse flute because of that, back in the 18th century and even in the earlier 19th century, they were all made of wood.

So that’s the flute I play: a wooden flute with only six open finger holes, no pads or rings yet, that was a 19th-century innovation, and only one key at the very end for a sharp or flat. This happens to be a d sharp or an e flat key. So all the keys we know on a modern flute for the other sharps and flats were also added in the 19th century mainly and other innovations. This is really the ancestor of our metal flute today, but all made of wood then.

Harmony: Thanks, Herb. And immediately to your left is Jenny Edenborn, thank you.

Jenny Edenborn: Thank you, Harmony. This instrument I’m playing is the violin. There have been some modernizations to the violin since the 18th century. So if you go back in time, the earlier instruments had a little shorter neck and fingerboard, plain gut strings, lighter base bar and sound post inside so that the sound isn’t quite as powerful as a modern instrument.

Harmony: And the instrument you’re playing is actually an 18th-century instrument.

Jenny: This is an original violin. I’ve had it put back by having the modern neck taken off and an older style neck put on, which would have been similar to the neck it originally had. It’s a Peter Walmsley instrument from the 1740s.

Harmony: And we have Wayne Moss playing an instrument I never saw before.

Wayne Moss: Many people have never seen it or don’t know what it is. It’s called a viola de gamba, which is a nice Italian name that means “stringed instrument for the leg.” It actually is held in the legs like the cello, although there’s no spike on the bottom. It has six strings, sometimes seven, but six on this one. They are tuned like the lute in fourths and a third.

It’s also fretted, and the bow is held with your hand under it, rather than over it like a cello player. This is an older style of instrument. These are invented several hundred years before the violin family. They exist side by side with violins, all through the 18th century. They finally die out at the end of the 18th century, in some part because they’re not as loud and don’t function as well in big concert halls.

Harmony: Let’s hear a bit. Do you have a song you can play for us today?

Jane: Actually, I think the group is going to start, the instrumentalists are going to start with a couple movements of a trio sonata by a composer named â€“ I love to say his name â€“ Joseph Bodin de Boismortier. He was a French composer, and this was a trio sonata that was written in 1726.

One of the things we know about the Christmas season, and anytime of year really here in Virginia and throughout most of the colonies is, most music was made by individuals in their homes. Amongst wealthy Virginians, this was something they did for their own entertainment. So this is the kind of music you might have heard at any season of the year.

We’ve chosen a couple movements from this one because they have sort of a Christmassy feel to it. The first movement is a musette, it sounds sort of like shepherds on hillsides. Then there’s a lively gavotte. This is from Boismortier’s opus 12, number six sonata.

Harmony: Do you have another example that shows us more of the vocal tradition of 18th-century music?

Jane: We do, actually. One of the main questions we get at this season of the year is what kind of Christmas music people would have been singing in the 18th century.

We don’t really know a whole lot about that aspect of the season. There is a little poem we often quote from the Virginia almanac of 1764 that says ‘Now Christmas comes, ‘tis fit that we should feast and sing and merry be.” But then when you go to find what they’re actually singing, there’s really nothing to be found.

We do know that at Bruton Parish Church, primarily most of the year, people would have been singings psalms in metrical form. What we would think of as probably pretty boring today. But there was one exception made to the psalms, the old testament psalms, and that would be a little carol that we occasionally still sing, called “While Shepherds Watch their Flocks by Night.” So we can sing that.

Music: “While Shepherds Watch Their Flocks by Night.”

Jane: Another form of vocal music that was popular in the 18th century, primarily with men, but there were some collections published for “polite society,” they would say, were the singing of catches. Catches are another term for rounds, and so we have one that’s called “Let us Drink and be Merry,” which was published in the 18th century.

Music: “Let Us Drink and be Merry.”

Harmony: Jane, it has been such a pleasure hearing you and all of the group today. For guests who come to visit the Historic Area, who come to see us here in Colonial Williamsburg, how can they share this same pleasure? Where can they see you?

Jane: Well they can find us during the daytime during the holiday season on Wednesday mornings at the Mary Stith, and that’s listed in the “This Week” brochure. Then in the evenings we are at the Governor’s Palace Saturday nights and the two weeks surrounding Christmas on Tuesday and Thursday nights as well.

Then also Sunday nights at the Capitol. But they’re all listed in the “This Week.”

Harmony: Thank you all so much for being here.