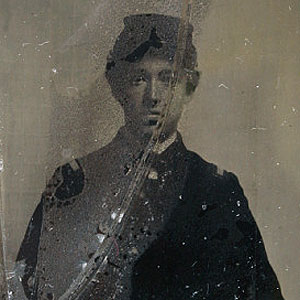 Christmases during the Civil War were marked with equal parts of sadness and hope. “Uncivil Christmas,” a Williamsburg music program, captures the mood in songs of the period. Carson Hudson narrates this musical podcast.

Learn more: How the Founders Sowed the Seeds of Civil War

Harmony Hunter: Hi welcome to the podcast. I’m Harmony Hunter. Well it’s Christmastime and we always like to think about music and a music podcast around this time of year. Usually we’re thinking about the Revolutionary War and Christmas music of that era, but this year we’re thinking about the Civil War; another war that has a great deal of history in Williamsburg. Our guest today is Carson Hudson. Carson, thank you for being here today.

Harmony: And Carson is the creator and one of the performers of the evening program Uncivil Christmas, which is a Civil War Christmas program. Carson, tell us about that program.

For example, Christmas trees are not around in the 18th century; the time of George Washington and Thomas Jefferson. But they’re just becoming popular in the years before the Civil War. And so one other aspect is the songs, the Christmas carols. The soldiers know some songs that we still sing today, but they had their own set of Christmas songs and when they came into the Army, they had to sing these things themselves in camp.

Harmony: How does the Civil War affect Christmas celebrations during those years? What happens to Americans?

Carson: Well the war affected Christmas celebrations greatly. We state in the program that when the Civil War begins we’re all Americans and that’s the sad thing about the Civil War, that we’re all Americans. But in 1860 and ‘61, North and South, we had different ideas of what it meant to be an American. So when the Civil War begins, the southern states, when they are seceding over slavery and states’ rights and things like this, they believe that they are continuing the tradition that the Founding Fathers intended and they form their own government. They would call themselves the United States, but that name’s already taken. So they call themselves the Confederate States. Again, it’s like a crossroads. The North takes one route, and the South takes the other to try to be doing the same thing in their own minds.

Harmony:Â So, Carson, you brought with you a merry band today, some performers from this evening program. Who’s here to sing for us today?

We’re going to give you some Civil War Christmas music, although a lot of it doesn’t seem like Christmas music to the people that were living at that time and over the Christmas season these songs meant a lot.

The song Jingle Bells, many people today think of it as a Christmas song, and it was around during the Civil War. It had actually been written a few years before the Civil War by a man who was the son of an abolitionist from New England but he had come south and supported the southern cause and he was living in Savannah, Georgia. He called the song The Once Horse Open Sleigh and it really wasn’t a Christmas song because if you listen to the song the word Christmas is never mentioned. It was just a song for the winter season and it sounded differently in the 1860s.

By that Christmas of 1862 you’re getting a lot of homesickness in camps and its reflected in the songs that they are singing such as at the Battle of Murfreesboro, December of 1862. The United States Army bands were playing The Star Spangled Banner or Our Colombia; the Gem of the Ocean. On the other side of the river the confederate bands, and this was the night before the battle, the confederate bands were playing Dixie and The Bonnie Blue Flag.

But then one union army band broke into a song that had been written in 1823 and had come to America as part of an opera, Maid of Milan. It was very popular; outrageously popular in America and all Americans, north and south, knew the tune and knew the words. Well, as these bands were playing, northern bands on one side of the river, southern bands on the other side, the northern band began to play this song and the southern bands joined in with them and then on both sides, soldiers in blue and gray, started to sing this song together the night before the Battle of Murfreesboro. The song was called Home Sweet Home.

As the Civil War was getting into its third year, times were hard in both the North and the South. In the south the blockade was keeping goods from coming in, people were hungry, the Confederate army was not being supplied. In the north with the casualty list it just seemed like the war was going on and on and on without end and there was a song that was written by Stephen Collins Foster called Hard Times that kind of fit the mood of the country.

Let us pause in life's pleasures and count its many tears,
While we all sup sorrow with the poor;
There's a song that will linger forever in our ears;
Oh hard times come again no more.

The War ended of course in April of 1865 here in Virginia with the surrender of General Robert E. Lee at Appomattox and an uneasy peace came over the nation. The war didn’t end everywhere at the same time, but it did quickly come to an end. By that Christmas of 1865, the first Christmas where we weren’t actually trying to fight one another, we were getting back to our Christmas traditions and there were some songs that kind of again dealt the mood of the nation. One of them I think is a song that came from Austria to America in the early 19th century. It was written in Austria I think in 1819. It comes to America and its an instant hit; Silent Night:

All is calm, all is bright

Round yon virgin mother and child

Holy infant so tender and mild

Harmony: Carson, thank you so much for being here today and thanks for bringing all of your performers. If people want to see this show where and when can they find you?

Â We welcome you to come and we hope that you come and hear a little bit of something different from George Washington and Thomas Jefferson at Christmas here in Colonial Williamsburg.