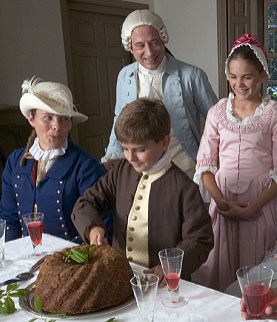 A rich, brandied fruitcake is the centerpiece of Twelfth Night celebrations. Barbara Scherer describes the dessert as it was meant to be.

Learn more: Get the recipe.

Harmony Hunter: Hi, welcome to the podcast. I’m Harmony Hunter. Food and holidays have been inseparable since the beginning. It’s a tradition that’s celebrated and continued in Historic Foodways, where 18th century recipes are recreated and savored every day. Barbara Scherer is our guest today. She’s here to talk about a very special cake that was part of colonial holiday celebrations. Barbara, thank you for being here today.

Harmony: Well we’re here today to talk about a Twelfth Night cake and I think before we even discuss this cake and its history maybe we should remind people what Twelfth Night is. What are we celebrating?

Barbara: Well you know Twelfth Night is on January the 6th and it’s a celebration actually of the arrival of the three kings to Bethlehem for the birth of Jesus Christ. And it also celebrates the end of the Christmas season. In colonial Virginia, Christmas was an entire season and not just a single day. You started on the 25th and you finished on the 6th.

The Twelfth Night cake goes way back. It’s a very old custom and it’s the biggest festival time of the year and, of course, a Twelfth Night cake is the highlight of the evening and actually it is a large rich fruitcake. So that’s what you’re making here. You’re making a rich cake. The cake that I made was from Hannah Glasse.

Harmony: And when we talk about Hannah Glasse this is one of the historic recipe sources, one of several that you use year-round in Historic Foodways. Who is Hannah Glasse?

Barbara: Hannah Glasse is what I like to describe as the Julia Childs, the Mrs. Beeton of this time period, because she was in reprint for 150 years. She is The Art of Cookery Made Plain and Simple by Hannah Glasse.

Harmony: So this cake was as indispensible to a Twelfth Night celebration as maybe pumpkin pie is to a Thanksgiving celebration today, and it’s the predecessor of the modern fruitcake, or maybe an ancestor.

Barbara: Well you’ve got to realize the Twelfth Night cake, by the time you’ve done it and you’ve coated it in brandy, you’re not going to want to give this to your neighbors. You’ll want to keep this and eat this.

Harmony: It’s so funny because now fruitcake is sort of reviled but this cake, the Twelfth Night cake, sounds like a very different animal.

Barbara: Oh it is, it is. I make one every year. Basically in this time period you would have made your Twelfth Night cake around October time and then you would soak it in brandy, brush it on, pour it on, a shot every two weeks. What it does is, when you bring out your cake from the oven and it’s still warm, put your first lot of brandy on because it’s going to sweeten up those fruits on the outside go all dry. So if you brush some on there, some warm brandy on this when it’s just come out of the oven, it softens them and doesn’t give you that burned taste that some cakes do. So that’s always a trick when you’re doing a fruit cake is to do that to it.

What they would have done they would have put a pea in it and a bean in it. The bean represents you would be the king of beans and the records we have here says, “In 1563 Mary Queen of Scots indulged in the Twelfth Night cakes.” And she also had one done for the party she was attending. Her attendant, Mary Fleming, got the bean. And the Queen played along with her and gave her her staff and her cloak because she then called her the Queen of the Beans and she was the queen for the night.

Harmony: What a lovely tradition. So whoever gets the slice of cake that has the bean in it?

Barbara: Yes. Indeed. And of course I say some people that put a pea in it too and so it’s usually King of the Beans and Queen of the Peas.

Harmony: We’ve talked a lot about the tradition. I want to talk a little bit about the recipe itself which I want to mention. As part of a body of work that you and your colleagues in Historic Foodways have done, we can even point people to this recipe now. It’s on a foodways blog at http://recipes.history.org where visitors can find not only the 18th century Hannah Glasse recipe, but a modern translation of it so that they can attempt it in their kitchens at home. But looking at this recipe what strikes me is the quantity of it. It seems enormous; four pounds of flour, six pounds of butter, two pounds of almond flour, four pounds of eggs. What kind of quantity are we talking about?

Barbara: We’re talking a very large cake. I mean when you have these parties you’re not just having four or five of you at these parties, it’s a lavish affair so it’s a really massive cake. It really is. You need a good brick oven to make that one.

Harmony: And you’ve mentioned that this is something that you would bake in November in the fall.

Harmony: October? And douse it with brandy. Does this preserve it until you’re ready to serve?

Barbara: It does and it also makes it taste good too. I like to say it becomes a happy cake.

Harmony: So what happens to it as it sits for that long?

I mean some people put vodka on it, some people put rum on it. Really it’s up to you. I like brandy. I think it finishes, it just adds some nice flavor to it. But if there was some other spirit that you wish to do yourself that you prefer, you don’t like brandy, then you can really do anything you want to it.

Harmony: As it sits that long and as it soaks in these small regular doses of brandy or whatever alcohol you prefer, does it become a denser cake than it would if you were to slice into it the day you baked it in October? How does it change in those months?

Barbara: It just adds the flavor to it. The flavor is what your adding. The density still stays the same. It’s just made maybe a little bit more moist than you would think of, but basically it’s just a wonderful flavor.

Harmony: These ingredients not only are they enormous in quantity but they suggest a sort of extravagance to me, the eggs, the butter, the sugar. Would every household had been able to bake a cake of this richness, or would this have been a cake you only found in upper class households?

Barbara: This would have been a cake you would only found in wealthy people’s homes. Poor people might boil something a bit like what we do today is a boiled Christmas pudding and plum pudding, but basically you’ve got to have a large oven for something like this.

Barbara: Well it depends on whose household you’re in. At the last two royal governors, it would had been their highly trained professional man doing it. But on the other hand if you’re looking at Peyton Randolph’s household, you’re looking at a slave woman there; George Wythe’s a slave woman. Thomas Jefferson, George Washington [kitchens] are both male slave cooks. So it really depends on who’s running the kitchen at that time. I mean the lady of the house will run the kitchen, but who is actually cooking the food.

Harmony: So if our listeners want a taste of this tradition and want to connect their history to the 18th century, to the 17th, the 16th centuries prior and they want to cook this in their own kitchens, what tips would you offer to them as they’re trying to prepare this cake?

Barbara: Well I would, I actually make mine. I mix all my ingredients together in a large bowl the night before and then I cover it in Saran Wrap.

Harmony: Your wet and dry ingredients the night before?

Barbara: Everything goes in the night before and then I just leave it sitting in the kitchen over night. And I know you’re all going to go, “There’s eggs in there, there’s eggs in there, I’ve got to put it in the fridge.” No. Don’t put it in the fridge. It’s o.k. to leave it out. Eggs don’t have to be refrigerated, believe it or not. And then of course the next day I will grease my cake pan and I just use a normal round one, not a Turk’s cap or a Bundt pan that you do here; just a normal cake pan. I grease it and flour it. I place it in and then I bake it off.

Harmony: And you said that you mix it all by hand, not by hand using a spoon, but your physical fingers.

Harmony: Â What is the difference when you mix a cake that way?

Barbara: You can feel the texture because it says cream the butter, sugar together. How can you know when you’ve creamed your butter and sugar together if you use a wooden spoon? The lighter you cream them together, the lighter your cake’s going to be. So you cream and cream and then eventually you’ll feel sugar melt with the heat of your hand. So that’s what you’re looking for. You’re creaming together all these wonderful butters and sugars and then you add your flour and your eggs, but mix it all by hand, you’ll feel the texture and of course it’s wonderful for the hands. You’ll have beautiful soft hands by the end of it.

Harmony: Well Barbara it’s been so fun having you hear today and I hope folks give this cake a try and resurrect the fruitcake as it was meant to be. Thank you for being here today.

Barbara: No problem. Thank you.