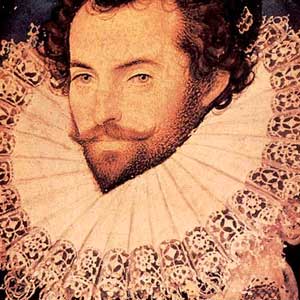 The mystery of the Lost Colony was doomed to remain unsolved, until researchers got curious about patches on an old map. Dr. Jim Horn lays out the story in two parts.

Harmony Hunter: Hi, welcome to the podcast. I’m Harmony Hunter. This week’s podcast is a mystery in two parts, with each half separated by 400 years. North Carolina’s Lost Colony has endured as one the East Coast’s longest-running unsolved mysteries. But new discoveries on an old map have given researchers and historians some stunning new clues. Dr. James Horn is our guest today. He’s Vice President of Research and Historical Interpretation here at Colonial Williamsburg, and a member of the First Colony Foundation. Dr. Horn, thank you for being here today.

Harmony: Well this is such an exciting topic. Before we dive into the new discoveries, I thought maybe we could recap the story of the Lost Colony, just for folks who might not have it fresh in their minds. This is a settlement on the East coast that actually pre-dates the Jamestown Settlement here in Virginia.

Jim: That’s right, by about 20 years. It was sponsored by Sir Walter Raleigh, and he had ambitions to create an English America, one that would rival in time Spanish America to the south. So he had a goal to create a privateering base to look for gold and silver in the mountains, and maybe even a passage to the other sea, i.e., the Pacific Ocean. So there are a number of objectives that Raleigh had.

He sent out an expedition in 1585-1586. It was a large-scale expedition, well manned and with a whole fleet of ships. It lasted about 12 months and had some success, but in the end couldn’t continue. And when that expedition returned in the summer of 1586, Raleigh began planning a second expedition. This is what we’ve come to know as the Lost Colony, which would be led by a man called John White, an artist, he would be governor of this colony, and that set out in the spring of 1587 from London with 118 men, women and children.

They returned to Roanoke Island, ran into difficulties, and it was decided that John White return to England for more supplies and settlers. Not to rescue them, if you like, but to reinforce the colony. But he didn’t get back for various reasons for three years. When he did return, the colonists had disappeared, not entirely without trace.

There were clues, but we can come on to those later. But that’s the mystery of the Lost Colony; what happened to those men, women and children?

Harmony: And many theories developed in the interim. For so many years, we had only those very slight clues. What were some of the prevailing theories of what might have happened to those 118 men, women and children?

Jim: The major theory that has been current for at least a generation is that the main body of the colonists, the majority of them, moved off the island probably in the winter or spring of 1587-1588 and moved northwards to the Chesapeake Bay. That is a theory that’s really based on the fact that the original destination of John White’s colony was not Roanoke, they were going to stop off there, but was the Chesapeake Bay where there were deeper rivers and that would make a more effective privateering base, it was thought. But of course as we know they never made it there. They ended up on Roanoke Island.

Harmony: What are some of the explorations or archeological investigations that have taken place previous to the most recent discoveries that have given us some clues about the settlement on Roanoke Island?

Jim: There’ve been some, although not many have been terribly successful. Ivor Noel Hume excavated on the Island in the 1980s and discovered what we’ve come to call a science building. It was probably the laboratory, very small laboratory of Thomas Harriot who was one of the principal scientists on the 1585 expedition. There’s a well known fort there at Fort Raleigh Park, which curiously enough is called Fort Raleigh, and it’s a small earthwork really, not nearly large enough to be a fort that could house and accommodate 118 people.

So the search has gone on, this is something the First Colony Foundation has been involved with over the last six or seven years. The search has gone on to look for the original fort, the entirety of the fort on the island, and also the settlement that was there. But there’ve been other excavations in the region, particularly up at the head of the Albemarle Sound: a huge waterway that runs 50 miles into the mainland. At the head of the Albemarle are two great rivers, the Roanoke River and the Chowan River, and in that area there’ve been excavations principally of Indian settlements and there have been a number of successes there in discovering Indian settlements that gives us a better sense of the local peoples at the time of the Roanoke Colonies.

Harmony: When it comes to theories about the disappearance of those colonists, my understanding is that you developed a theory that actually runs a little bit counter to some of the prevailing theories of where those colonists might have gone. What’s your theory and how does it differ from the more generally accepted one?

Jim: My theory is that the colonists, the main group, did not go northwards to the Chesapeake Bay, but headed westwards up the Albemarle to the confluence of those two great rivers that I just mentioned. I think there’s all kinds of circumstantial, and it is mainly circumstantial evidence for that, at least until relatively recently I think, but it seemed to me much more plausible that they would have headed inland. Because inland, they would have found friendly Indian peoples, people called the Chowanocs who lived on the Chowan River. They would have found food if they could have befriended the Indians. Fresh water is up there, it’s an area that would have protected them 50 miles inland, protected them from maybe being found by the Spanish who were looking for them.

The Spanish controlled not just South America but claimed North America at this time, and so they didn’t want the English trespassing on their land so they wanted to get rid of them. There was real fear that they would be discovered by the Spanish.

The other popular pieces of evidence that we have dates from the time itself, pretty much. One is a rather enigmatic statement by John White. There is a journal that John White kept that gives us some of the information about the Lost Colony, and when he left the Island in 1587 to return to England for help, he mentioned that the colonists intended to move presently, i.e. shortly, 50 miles into the main. And that means 50 miles into the mainland. Well, on a modern-day map if you look at the distance from Roanoke Island to the head of the Albemarle Sound, it’s about 52 miles. So it’s a pretty good indication that he didn’t know exactly where they were going, but he had some idea, a clear idea that they would be heading in that direction.

There is a further clue from about 20 years later, which is a map which dates from the Jamestown colony period, the early Jamestown colony dates from 1608, it’s called the Zuniga map, and it’s named after a Spanish ambassador to the Court of St. James who was a Spanish spy and knew more Virginia and more about the Jamestown colony than many of the Jamestown colonists did themselves. So he was well connected. He got a copy of a map that had been sent back by the English that gives some clues as to where survivors of the Lost Colony were to be found, none of them on the Chesapeake Bay, all within the interior of what we now call North Carolina. So I think that was another firm piece of evidence that we were looking in the wrong direction. We were looking North when we should have been looking West.

Harmony: One of the most suggestive clues that I’ve heard in connection with the Lost Colony story is the carving on the tree that says “Croatoan.” How have historians and researchers made sense of that?

Jim: Well, I think initially John White made sense of it from the point of view that, two things, from the point of view that “cro” or “croatoan” meant the Island of Croatoan which about 50 miles to the south of Roanoke, a small island that was inhabited by the Croatoan people led by an Indian called Manteo who had befriended, he was essentially anglicized, he befriended the English.

But I think modern historians feel that the entire colony wouldn’t have survived there. There just wasn’t enough space or land or produce to support a colony of the size that John White took. But I think there’s a very good chance that a smaller group remained initially on Roanoke Island, and when they left they carved those names into the trees and posts and they also did something else that was important. Or didn’t do something else: they didn’t carve a Maltese cross. A cross that would indicate that they had left in distress, that they were being attacked. So John White took from that that they’d left in an orderly fashion. The houses had been removed, which might seem odd, but it takes a lot of labor to create, to put up these houses so they took down the timbers. The main group would have taken all that and the smaller group would have remained initially on Roanoke Island, waiting for John White and then perhaps moved off to Croatoan where they might have felt they’d be safer.

Harmony: And for 400 years, that was pretty much all we knew about the Lost Colony. Tune in next week to hear how recent discoveries on an old map at the British Museum offer new clues.