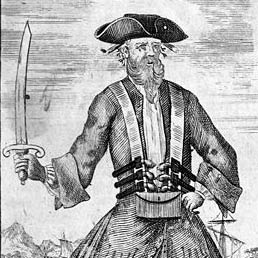 A disgruntled pirate’s haunted history lingers in the town where his shipmates met the hangman. Carson Hudson and Willie Balderson team up for “Pirates Amongst Us.”

Learn more: Pirates Amongst Us program Blackbeard the Pirate

Harmony Hunter: Hi, welcome to the podcast. I’m Harmony Hunter. Colonial Williamsburg is exploring history’s lawless side with a new evening program called “Pirates Amongst Us.” We’re bringing you a preview of that program just in time for Halloween.

Back on the show today is our old friend Carson Hudson, who had the pleasure of creating the “Pirates Amongst Us” program. Carson, welcome. Thanks for being back on the show.

Harmony: You must have had fun researching this program.

Carson: Well it’s always fun looking into what the pirates did. Pirates were all up and down the east coast in the late 17th and early 18th century. In fact, the golden age of piracy, those years between say 1680 and 1720, when most people think of pirates like Captain Hook and Blackbeard and all that, a lot of it happened off the coast of eastern Virginia. We have more pirate stories and pirate sites actually here in Williamsburg than I can think of anywhere else in the world in one small location.

Harmony: Tell me about some of the Williamsburg pirates that inspired this evening program and the dramatic storytelling that’s done there.

Carson: Well, our pirate tour and ghost tour about pirates consists of stories about the man known as Blackbeard, Captain Edward Teach. He was probably the most notorious of the pirates. At one time, he commanded a fleet of over 400 sailors and four ships. They were up and down as I said, they blockaded Charleston, SC. The governor of Virginia, Governor Alexander Spotswood, felt that because of the danger that Blackbeard was posing to Virginia’s economy, that he should get rid of this guy.

He sent a naval expedition, a royal naval expedition down to North Carolina, where, at Ocracoke Island, Blackbeard and several members of his crew were discovered, there was a classic sea battle that would make a great TV miniseries, fought at Ocracoke Island. Blackbeard was killed, his head was cut off, and brought back to Hampton and stuck on a pole in Hampton Virginia, which is the location is now called Blackbeard’s point.

When he was killed, 15 members of his crew were captured down in North Carolina and brought to Williamsburg. That’s the basis of our story, is the reign of terror of Blackbeard. Because there are so many great stories we’ve kind of built them up from the legends to entertain our visitors.

Harmony: We’re going to be getting a preview of the Pirates Amongst Us program. Tell us a little bit about the scene that we’re going to hear.

Carson: You’re going to see Israel Hands. Israel Hands was an actual member of Blackbeard’s crew. He was Blackbeard’s first mate. During the siege of Charleston, he commanded one of the four ships that Blackbeard had. We don’t know too much about his early life, however we do know that onboard Blackbeard’s ship, he had some run-ins with the captain, and Blackbeard actually crippled Israel Hands by shooting him in the knee.

When the pirates were all captured after Blackbeard’s death, in 1718, Israel Hands, even though he was a cripple and actually bedridden at the time, he was picked up by the royal navy and brought to Williamsburg to be tried. So the scene that you’re going to see is Israel Hands after the trial. Israel Hands did turn state’s evidence against his fellow pirates, and received a pardon from the king. So he was released.

He also possibly has some connections with Blackbeard’s head, because you see Blackbeard’s head that I mentioned before at Blackbeard’s point, after the head had been on the pole for a while, it had worn away to the skeleton, or to the skull. And the skull disappeared. I think Israel Hands knows something about that.

Willie Balderson: Well, I see that we have some travelers in town! No doubt you’ve heard of the hospitality of Mr. Raleigh’s Tavern, and are desirous of rest and refreshments. Well, let me serve you! My name is Israel Hands, and Iâ€¦

But wait, I see that you recognize my name and are suddenly fearful. Have no fear my new friends. Let me tell you the truth of what you may have heard. It is true, I were amongst them black-hearted dogs what were tried for piracy several years past. It was quite the news at the time! I’d sailed and pirated from the Indies to the Chesapeake here in Virginia.

But it were in North Carolina that meself, along with fourteen others, were taken up by the Royal Navy. We was put in chains and tried here in Williamsburg before Governor Alexander Spotswood himself. Fourteen of us was found guilty, and sentenced to be hanged. I alone received a pardon, part-ways because I gave evidences against the others, and part-ways because I am naught but a worn out old cripple, who can do no harm.

When I received the King’s mercy, I began a new life here. Now, I do what I’m told, sweeping up, emptying the slops, and serving fine gentlefolk, such as yourselves. Since we’ve come to be better acquainted, if I might make bold, I once led quite a different life. I was an honest seaman at one time. Then one night in a smoky tavern, I met the Devil’s spawn himself, Captain Edward Teach. Aye, Blackbeard!

He were half drunk, and roaring out some great song amidst a crowded room. But after he were done, he foreswore that any who took to the life at sea with him would make more money in one voyage than they would make in their entire life as a scurvy sailor. Well, I must say that I was taken in. The way that he looked at you â€“ his eyes peered into your soul and you felt as if you could do naught but what he commanded. And his appearance! He wore his hair long and loose, which framed his head and heavy black beard, what grew down his chest. He stood taller than any of the rest of the crew.

In time of action, he wore a sling over his shoulders, with three brace of pistols, hanging in holsters like bandoliers. He would stick lighted match cords under his hat, which appearing on each side of his face, his eyes naturally looking fierce and wild. He looked like he was on fire as he came at you. Many time, I saw a ship’s captain cower like a whipped dog and surrender without no fight, just a-setting their eyes upon him.

So yes, I became a pirate. I freely admit to it. I done horrible things. I can only tell you that I once was an honest sailor, what fell in amongst very bad company. Mind you, Captain Teach was as good as his word. We all shared the plunder and I had money. But it would go as quick as it came whenever there was rum and women ashore. In other ways though, it was like walking on the edge of a razor. One false step and you’re sliced down the middle.

You see, Teach was more than a little mad. He enjoyed frolics of wickedness. I remember one day at sea, he was more than a little flushed with drink, and he says, “Come, let us make a Hell of our own, and try how long we can bear it!” Then, he, with four or five others, went down into the hold, and closing up all the hatches, filled several pots full of sulfur and brimstone, and set fire to them.

Of course, after only a few minutes, when they was near suffocated, some of the men cried out for air. Teach only smiled and said, “Let’s wait a bit longerâ€¦”Finally, they could bear it no more and one of the men kicked open a hatch. Teach was the last to come out, and he were more than pleased that he had lasted longest. When he come out of that hold, with the yellow sulfur fumes rising up about him, he truly looked like Lucifer coming from the bowels of Hell!

I seen some of you looking at me leg. Curious, are you, how I come to be a cripple, limping about as I do? Well, it was Teach what done this to me. One night, we was a-drinking in his cabin with the ship’s pilot, and another man. Teach, without so much as a by-your-leave, draws out a pair of pistols, and cocks them under the table, silent like. When the pistols was ready, he blew out the candle, and crossing his hands, pulled both triggers.

One pistol ball it caught naught but air. But the other, it shattered my knee, and I were lamed for life. As I lay there a-bleeding in agony, the others asked why he done such a black thing. He only answered by damning them all and saying that if he did not now and then kill somebody, we would forget who he was. How I hated him after what he done to me. But mind you I were bound, I was sworn, bound on a blood oath to the pirate brotherhood, to always serve my captain.

Nevertheless, fate caught up with Teach. No doubt, you’ve all heard of the great battle where he were killed at Ocracoke. Teach fell on a blood-spattered deck with five pistol balls in him and a slashed neck. They cut off his head right smart and brought it to Hampton-town where they put it on a large pole, to announce to all the world that Blackbeard, was dead and gone to Hell.

Sometime later, after the buzzards had picked the skull clean, it disappeared. Some people say it were thrown into the sea. Some say it were buried in a secret nameless grave. And some say that it were cast into a silver punchbowl, so that fine gentlemen could toast their health and damn pirates. But mind you, these is all just stories.

But here now, I don’t wish to disturb your slumbers tonight with nightmares about dead pirates. You’ve had a long journey to get here, have you, and you need some refreshment. I told you that I would serve you, and I serve you I shall because I’ve always been a man of me word. As I told you before, I swore an oath many years ago to Blackbeard to always serve my captain. Here, let me fetch you some cups. I’ll just be a moment.