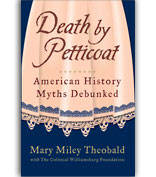 Historical myths can be more appealing than the historic record. Author Mary Miley Theobald tells some of her favorites.

Harmony Hunter: Hi, welcome to the podcast. I’m Harmony Hunter. We’re joined once again by our resident mythbuster, Mary Miley Theobald. She’s stopped by before to talk about some of the most persistent myths of the colonial era, and she’s been so successful in collecting more myths, that she’s back today with an entire book of American history myths. The book is called “Death by Petticoat,” and it’s available at Colonial Williamsburg booksellers. Mary, thank you for being here today.

Harmony: Well you’ve been busy since we last talked. You’ve gone from a collection of myths in a journal article to a whole book full. What have you been up to?

Mary: Well, it all started in 2006 when I saw an exhibit at the DAR Museum on myths and I thought it would make a good article for CW’s Journal. The article caused people to write in about more myths, and pretty soon there was a second article. Pretty soon I started a blog, and before I knew what was happening, I had enough to do a whole book. This book, “Death by Petticoat,” has 63 myths and oddly enough, I’m still collecting myths. I almost have enough for a second book, so we’ll have to see how that goes.

Harmony: What a fun hobby this must be. Where do these myths come to you from?

Mary: Well a lot of people share what they hear in museum settings, particularly people here at Colonial Williamsburg, some of the tradesmen and historic interpreters tell me what myths bother them the most and could I please debunk this one for them. I hear from other museums, especially on my blog, and a lot of people who are historical interpreters at other sites around the country at national parks and history museums and battlefield parks, and museums all over the country.

Harmony: Well let’s talk about some of these myths. I want to start by covering one you’ve actually explained before on this show, but since it’s the title of your book, I thought we could talk about death by petticoat. What is this petticoat myth?

Harmony: So moving on to some of the new myths that you found and published in your new book â€“ one of the ones that I thought was entertaining was poisonous vegetables.

Mary: Right. It’s hard to imagine, but no one in Europe knew about tomatoes or potatoes until the new world was discovered. The Spanish explorers discovered the tomato growing in Central America and they brought it back with them to the Old World. It spread from Spain to Italy to France and people ate it, people loved it. There was no thought of it being poisonous. But during the late 1500s, a very unreliable English barber/surgeon published a book about plants, and he claimed in this book that the tomato was poisonous even though he noted that the Italians and the French ate it, which I think is hilarious because presumably they aren’t quite human then. But this book set the stage for the English-speaking world to be suspicious about the tomato.

So the myth says that the colonial Americans thought the tomato was poisonous and there may have been a few who did in the very early times, the 1600s. But by the 1700s the tomato had been brought to colonial America from Europe mostly by through trade, international trade, and from countries like Spain and Italy where it had been long enjoyed. So it’s an exaggeration with a little kernel of truth to it.

The potato was a really suspicious kind of vegetable. It too came back from South America with the Spanish and was very quickly assimilated into European farming traditions, but originally people were suspicious, as you would expect them to be for a new unfamiliar food. Some thought the potato caused leprosy or that it was associated with the devil because it wasn’t mentioned in the bible therefore it must be something God didn’t want you to eat.

The association with leprosy has to do with the shape of the gnarled potatoes. They weren’t great big smooth potatoes that you’re used to now, but people felt that they looked like a leper’s gnarled fingers and toes so that the potato might cause leprosy. But then on the other hand some people said the potato protected against rheumatism or that it worked as an aphrodisiac so that of course would have spurred people to give it a try.

Mary: This myth probably came about because of the tendency to apply something that is true in one time or place to another time or place when it isn’t true. With log cabins, the earliest settlers didn’t build log cabins because they didn’t know how. It wasn’t part of their culture. The earliest settlers would have been the Spanish in Florida, and that’s about 1565, the French in Canada, 1605, the English in Virginia, 1607, and none of these newcomers came from a culture that used logs to build homes. They built the sort of houses that they were familiar with back in Europe which could have been wooden frame houses or brick or wattle and daub. But log cabins were part of the Scandinavian culture, and so when those immigrants started to come to the New World in the 1640s or so, they brought that tradition. It was such a good idea that it spread, and pretty soon it became the default house for pioneers, but it was not something that the earliest settlers ever built.

Harmony: These myths are really just delightful to hear and they’re funny and surprising, but I wondered if we might be able to reflect a little bit on why we create these myths.

Mary: They do help explain things and they seem logical to us today. We apply today’s logic to a period in time where it doesn’t apply anymore I’m afraid. We look back in the past with maybe a little too much superiority, thinking that, “Yes, we are so much more technologically advanced than they were back then,” in no matter what the period is. But people back then weren’t stupid and we often give ourselves a little too much credit. With the myth, we can sort of look back on people and think, “Oh, weren’t they foolish, weren’t they silly, they didn’t know this or they thought that,” and it makes us feel a little superior.

Let me tell you about my most embarrassing myth. This is in the book. Its myth number 50 and it is a myth that you hear in historic houses sometimes that stairs were built with one riser noticeably shorter than the rest, and the reason was to trip up burglars or intruders. And you know, perhaps, that at the Peyton Randolph House, the back stair has just this kind of short riser on the top step. The story is told that this was done on purpose, so that when an intruder was coming in he would go, “step, step, step, step,” and then the foot would come down “thud” on the top step where the shorter riser would make him trip or fall and that would wake the household and the burglar would be caught and everybody would live happily ever after.

Of course this isn’t true. I talked to Garland Wood, the master carpenter at Colonial Williamsburg, and he said that building stairs is really hard, and that when you’re off just a fraction of an inch starting from the bottom working up you may be off a whole inch or so when you get to the top, and what are you supposed to do? Tear the whole thing down and start all over? I don’t think so. It was really quite a lucky carpenter and a very skilled carpenter who could come out exactly, exactly right.

But back in the 1970s, I worked in costume at the Peyton Randolph House. And I’m so ashamed I told this myth to, I suspect, 2,000 people in two different summers. And so I am the guilty person for this myth, because I spread it all over the place. And how did I learn about it? Well I certainly wasn’t trained to say that. Colonial Williamsburg trained us to say, “Please be careful on the top steps so you don’t trip and fall and hurt yourself.” They didn’t tell us this silly story, but I heard another docent, an older woman say it and I thought ,“Well, she’s older and more experienced than I am, she must know.” And I repeated it from that. And that’s the way most myths spread. We hear them, they sound interesting, they sound logical, they’re memorable and so we repeat them.

Harmony: You mentioned that you have a blog where you collect myths ongoing. Where can people find this blog?

Harmony: And the book is called “Death by Petticoat.” We hope a lot of people will pick it up. The author is Mary Miley Theobald. Mary, thank you for being here today.